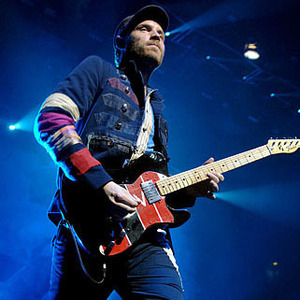 Jonathan Mark Buckland (born 11 September 1977) is a Welsh musician and multi-instrumentalist. He is the lead guitarist and co-founder of the rock band Coldplay.

Jonathan Mark Buckland was born on 11 September 1977 in Islington, London. He lived there until the age of four, when his family moved to Pantymwyn in Flintshire, Wales.[1] Buckland started playing the guitar at the age of eleven, inspired by The Stone Roses, Ride, George Harrison, U2, and My Bloody Valentine, and also encouraged by his older brother Tim.[1] He was a student at Ysgol y Waun and Alun School, the latter located in the Welsh town of Mold. He went on to study astronomy and mathematics at University College London, where he met future bandmates Chris Martin, Guy Berryman, and Will Champion, as well as their future manager Phil Harvey, and formed Coldplay.

Buckland is noted for his sparse arrangements and use of slide. His stylistic chiming and ringing sound have led to some comparisons with the playing of U2's The Edge.[2][3]

Buckland has guest starred on Ian McCulloch's solo album Slideling and made a cameo appearance with bandmate Chris Martin in the film Shaun of the Dead.

Buckland largely uses the Telecaster Thinline 72' as his main electric guitar, as seen mainly in the albums Viva la Vida or Death and All His Friends, X&Y, and Mylo Xyloto. Buckland uses the Fender Stratocaster for his secondary guitar, but he has made clear that the Telecaster series is his favorite. Buckland's guitar style is mainly based on U2's The Edge's guitar sound, which consists mainly of ringing, conservative notation, various amps and distorters, and musical rawness. Buckland's guitar-playing style has in turn inspired many other bands to adopt a similar technique, such as The Fray's Joe King, The Killers' David Keuning, and Pat Monahan from Train on some songs. The Edge himself stated in an interview at Glastonbury: " is an inspiration to guitar players everywhere, and I am proud to know that I was one of his main influences. (laughs) It makes me feel like a real rock star."

Buckland is a fan of Tottenham Hotspur F.C.[4] Buckland was a vegetarian for some time, but eventually gave up after spending some time in Japan and, after not being able to communicate that he didn't eat meat, was served beef and found that he really liked it.[5] Buckland's brother Tim and his band The Domino State supported Coldplay at the O2 in December 2008.[6] Buckland married Chloe Evans in 2009, and the pair have a daughter, Violet, born in May, 2007 and a son, Jonah, born in November, 2011.