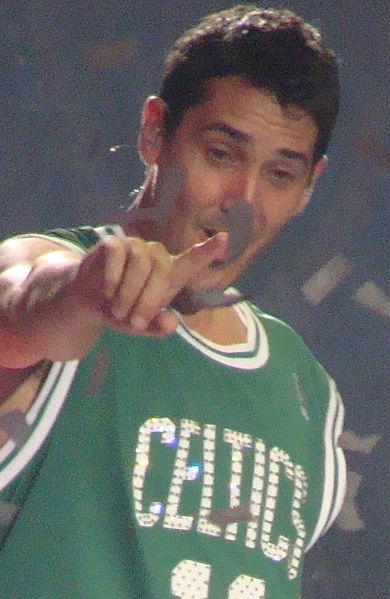 Jonathan Rashleigh Knight (born November 29, 1968) is an American singer. He is part of the boy band New Kids on the Block. It also includes Donnie Wahlberg, Joey McIntyre, Danny Wood and his younger brother, Jordan. He is the oldest member of the band and the first to leave it in 1994 prior to their official split.

Jonathan Rashleigh Knight was born in Worcester, Massachusetts to parents Marlene Putnam and Allan Knight. He is the fifth of six children: Allison, Sharon, David, Christopher and Jordan.[1] His parents are both Episcopal priests. His parents are Canadian, his father from Meaford, Ontario and his mother from Dunnville, Ontario.[2]
Read more...

New Kids on the Block

From 1986 until 1994, Knight was a member of the American boy band New Kids on the Block. They went on to sell over 80 million records worldwide before splitting in 1994 after he left during the tour for their 1994 album Face the Music. They originally tried to continue the tour claiming he had been badly hurt by a horse, but in a press conference a few weeks later, they revealed that they were actually splitting.[citation needed] His early departure led to reports that some members were frustrated with the way he did so and that those feelings prevented an earlier reformation of them.[citation needed]

In the spring of 2008, Knight returned to show business, reuniting with the other four members of New Kids on the Block. They released their seventh album (and first in 14 years), The Block, on September 2, 2008. To confirm their reunion and announce the new album, they performed live together on May 16, 2008 for the first time in fifteen years on the Today show.[3][4]

A world tour was scheduled to follow the new release and began in Toronto on September 18, 2008. The first single from it, "Summertime", performed well worldwide peaking as #9 in Canada and breaking the top 30 in the U.S. charts (#24 as a digital download). They released "Single", their second single from The Block in August 2008.[5]

Knight is the older brother of Jordan.

In the years after the group first disbanded, Knight worked as a real estate investor living in Essex, Massachusetts; no longer in the spotlight, he rarely made public appearances or gave interviews. In 2000, he revealed that he had suffered from generalized anxiety disorder since his early career with New Kids on the Block.[6] He has since sought medical help and his health has improved.[7] In 2011, he appeared on MTV reality series True Life to help a fan suffering from panic disorder.

In the early 1990s, Knight was linked to teen pop singer Tiffany; both denied dating at the time.[8] In 2009, the National Enquirer published an article from his ex-boyfriend which outed him as gay.[9] In a January 2011 interview, Tiffany stated that he is gay,[10] which he then confirmed, saying "I have lived my life very openly and have never hidden the fact that I am gay."[11] In a statement on the New Kids on the Block blog, he added "Apparently the prerequisite to being a gay public figure is to appear on the cover of a magazine with the caption 'I am gay'. I apologize for not doing so if this is what was expected!"[12]

Knight has been in a relationship with Harley Rodriguez as of 2008.[13][14] The two participated in the 26th season of the reality competition series The Amazing Race, which aired on CBS in early 2015, where they placed 9th.[15] The two became engaged when Knight proposed on November 15, 2016 while they vacationed in Africa.[16]