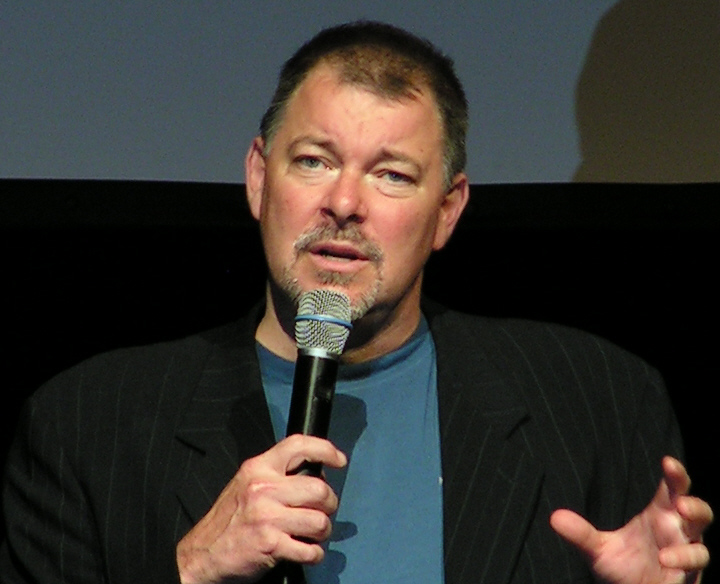 Jonathan Scott Frakes (born August 19, 1952) is an American actor and director. Frakes is best known for his portrayal of Commander William T. Riker in the television series Star Trek: The Next Generation and subsequent films. Frakes also hosted the television series Beyond Belief: Fact or Fiction. In June 2011, Frakes narrated the History Channel documentary Lee and Grant. He was the voice for David Xanatos in the Disney television series Gargoyles.

Frakes directed while starring in Star Trek: First Contact as well as Star Trek: Insurrection. He directed episodes of several Star Trek television series and The Orville. He is the author of the novel The Abductors: Conspiracy.[1]

Frakes was born in Bellefonte, Pennsylvania, the son of Doris J. (née Yingling) and Dr. James R. Frakes. He is of mostly German and some English descent.[2] He grew up in Bethlehem, Pennsylvania. A 1970 graduate of Bethlehem's Liberty High School, he ran track and played with the Liberty High School Grenadier Band.[3] Frakes received a Bachelor of Fine Arts in Theater Arts at Pennsylvania State University in 1974, where he was a member of the Thespians and a MA from Harvard University in 1976.[4]

His father was a critic for the New York Times Book Review, a book editor, and professor of English literature at Lehigh University from 1958-2001, where he was the Edmund W. Fairchild Professor in American Studies. James R. Frakes died in early 2002.[5] Frakes had a younger brother, Daniel, who died in 1997 from pancreatic cancer.[6]

For a time in the 1970s, Frakes worked for Marvel Comics, appearing at conventions in costume as Captain America.[7] Frakes moved to New York City and became a member of the Impossible Ragtime Theater. In that company, Frakes did his first off-Broadway acting in Eugene O'Neill's The Hairy Ape directed by George Ferencz. His first Broadway appearance was in Shenandoah. At the same time, he landed a role in the NBC soap opera The Doctors.[8] When his character was dismissed from the show, Frakes moved to Los Angeles and had guest spots in many of the top television series of the 1970s and 1980s, including The Waltons in an episode called "The Legacy", Eight Is Enough, The Dukes of Hazzard, Matlock and Hill Street Blues.

He played the part of Charles Lindbergh in a 1983 episode of Voyagers! titled "An Arrow Pointing East". In 1983, he had a role in the short-lived NBC prime time soap opera Bare Essence (which also starred his future wife Genie Francis), and a supporting role in the equally short-lived primetime soap Paper Dolls in 1984.[8] He also had recurring roles in Falcon Crest[8] and the miniseries North and South before signing for the role of Commander William T. Riker on Star Trek: The Next Generation.[9] Frakes appeared in the 1986 miniseries Dream West.

He has done animation voice acting, most notably voicing the recurring role of David Xanatos in the animated series Gargoyles, and he provided the voice of his own head in a jar in the Futurama episode "Where No Fan Has Gone Before". He had a small, uncredited role in the 1994 movie Camp Nowhere. He also reprised his role of Riker for a Next Generation cutaway on an episode of Family Guy that also featured his co-stars Patrick Stewart and Michael Dorn as their respective roles of Picard and Worf. Later, he again played himself on another Family Guy episode, where all seven main TNG actors (plus Denise Crosby and Wil Wheaton) made voice appearances. He is also one of six Star Trek actors (the other actors being Kate Mulgrew, Michael Dorn, George Takei, Avery Brooks and Majel Barrett) to lend their voices to the video game Star Trek: Captain's Chair, reprising his role as Riker when users visit the Enterprise-D bridge featured in the game.

Frakes is one of only two Star Trek regulars to appear on four different Star Trek series (Star Trek: The Next Generation, Star Trek: Deep Space Nine, Star Trek: Voyager and Star Trek: Enterprise). The only other regular to match or exceed that number is Majel Barrett-Roddenberry who appeared in five of the television series. He has also directed episodes in four of the series (TNG, DS9, VOY, and DIS). His directing career has included the films Star Trek: First Contact and Star Trek: Insurrection. Additionally, Frakes was an executive producer for the WB series Roswell, directed several episodes, and guest-starred in three episodes. His relationship with Star Trek is made light of in the episode "Secrets and Lies", in which the alien character Max auditions for a guest role as an alien for Star Trek: Enterprise.

Frakes appeared on the 1994 Phish album Hoist, playing trombone on the track titled "Riker's Mailbox". Frakes would occasionally perform on the trombone during his tenure as Commander Riker, drawing on his college marching band experience. He was also a member of "The Sunspots", a vocal backup group of Star Trek cast members that appeared on Brent Spiner's 1991 album Ol' Yellow Eyes Is Back.

Frakes hosted The Paranormal Borderline, a television series on UPN, which dealt with the paranormal and mysterious happenings and creatures. In one episode, Frakes presented an interview of reporter Yolanda Gaskins with veteran astronaut Gordon Cooper, where they discussed the possibility of aliens having visited Earth in the past.[10][11] Overall, the show was criticized and pulled off the air after it was discovered that footage showing a yeti from the Himalayas was purposely faked by the show and its producers. The "Snowwalker" footage, as it is known, purportedly shows a yeti crossing through a valley in the Himalayas, walking in front of a Belgian couple who are traversing the area on skis. The network finally admitted the hoax, and Frakes distanced himself from the show. He hosted Beyond Belief: Fact or Fiction, which also dealt with the paranormal world.

Frakes and Francis appeared together in Lois & Clark in the episode "Don't Tug on Superman's Cape" as a creepily too-good-to-be-true couple. He narrated the History Channel's That's Impossible.

Frakes works with the Workshops, the Waterfall Arts Center, and the Saltwater Film Society, all located in Maine, where he teaches classes on film direction. He and his wife owned a home furnishings store in Belfast, Maine, called The Cherished Home, which closed in August 2012 due to his wife being too busy with her acting to spend adequate time at the store.[13]

Frakes was also the voice of Finn the Human's adult version in the episodes "Puhoy" and "Dungeon Train" on Adventure Time.

Frakes first met actress Genie Francis on the set of the television soap opera Bare Essence, and again while filming the mini-series North and South. They began dating in 1985, became engaged in 1986, and married on May 28, 1988. They have two children.[14]

Report a problem
Write to Jonathan Frakes at FanPal • 2020