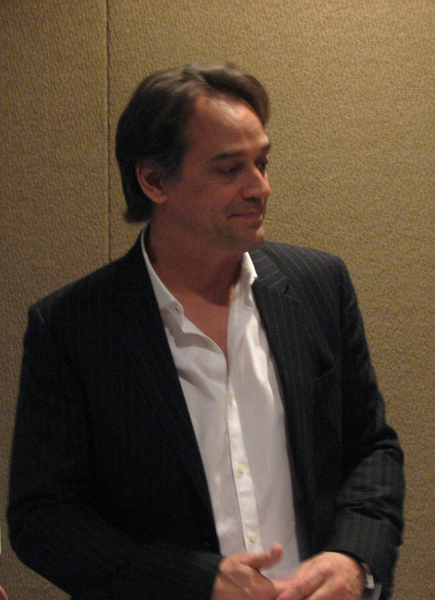 Jon Robert Lindstrom (born October 18, 1957) is an American actor, writer, director, producer, and musician. He is well known for his role as Kevin Collins on the ABC Daytime soap opera General Hospital and its spin-off Port Charles.

Lindstrom was born in Medford, Oregon, to Robert, a TV advertising executive, and Suzanne Lindstrom, a homemaker. He has an older brother, Jeff. As a drummer, Lindstrom recorded the album Feel Free to Do So with the band The High Lonesome for the Spark Records label.[2][3][4] The record garnered much industry praise and "most-added" status for two singles on the Billboard Hot 100. In 2014, his award-winning feature film How We Got Away With It, which he co-wrote, co-produced and directed, was released.
Read more...

Lindstrom developed a love for acting and music at an early age. He took that passion to the University of Oregon theatre and music schools. Upon graduation, he moved to Los Angeles, where he studied with some of the most prominent acting teachers of the day, including Lee Strasberg, Stella Adler, Jeff Corey, and Bob McAndrew.

Lindstrom, award-winning actor, director and screenwriter, has worked successfully on both sides of the camera for over 20 years. His acting career includes parts on the television dramas, As the World Turns on CBS (for which he received an Emmy Nomination for Lead Actor in a Drama Series) and the roles for which he may be best known for; his 11+ year portrayal of disturbed twin brothers, Dr. Ryan Chamberlain on ABC Daytime's soap opera General Hospital and Dr. Kevin Collins on ABC Daytime's soap operas General Hospital and Port Charles. Other credits of note include NCIS, Drop Dead Diva, Blue Bloods, CSI: Crime Scene Investigation and Everwood.

Recent award winning films as an actor include What Happens Next, and The Double Born. Lindstrom was creator, co-screenwriter and co-executive producer on the 2007 HBO/Time Warner release, The Hard Easy, and was featured in Must Love Dogs. His telefilms include While the Children Sleep, Introducing Dorothy Dandridge, and Fall From Grace.

An active athlete, Lindstrom is an avid skier, scuba diver, surfer, and a proficient martial artist. In addition to those sports he enjoys traveling and has seen much of Europe, Africa, Asia, and the United States. He is an active member of the Directors Guild of America, the Screen Actors Guild, the Academy of Television Arts & Sciences, and AFTRA. He is married actress and former As the World Turns co-star Cady McClain.[5]

A lifelong drummer, his band The High Lonesome recorded Feel Free To Do So, which garnered "most added" status for two singles on the Billboard Hot 100. The band recently recorded new songs for their latest release, The High Lonesome Collector's Album 1995-2010.[citation needed]