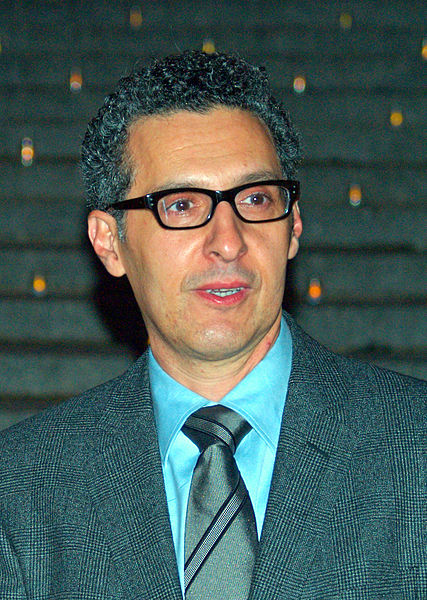 John Michael Turturro (/tərˈtʊəroʊ/;[1] born February 28, 1957) is an Italian-American character actor, writer and filmmaker known for his roles in the films Do the Right Thing (1989), Miller's Crossing (1990), Barton Fink (1991), Quiz Show (1994), The Big Lebowski (1998), O Brother, Where Art Thou? (2000) and four entries in the Transformers film series, most recently The Last Knight (2017). He has appeared in over sixty films and has worked frequently with the Coen brothers, Adam Sandler and Spike Lee.

John Turturro was born in Brooklyn, New York, the son of Katherine Florence (Incerella) and Nicholas Turturro. His mother was born in the U.S., to Italian parents with roots in Sicily, and was an amateur jazz singer, who had worked in a naval yard during World War II.[2][3][4] His father had immigrated to the United States from Giovinazzo, Italy, at age six and later worked as a carpenter and construction worker before joining the U.S. Navy during the war.[2] Serving as a sailor, he was with the D-Day fleet supporting the landing operations of Allied troops in Normandy, France, in 1944.[2]

Turturro was raised a Roman Catholic and moved to the Rosedale section of Queens, New York with his family, when he was six.[5] He majored in Theatre Arts at the State University of New York at New Paltz, and completed his MFA at the Yale School of Drama.

Turturro's first film appearance was a non-speaking extra role in Martin Scorsese's critically acclaimed Raging Bull (1980).[6] He created the title role of John Patrick Shanley's Danny and the Deep Blue Sea at the Playwrights Conference at the Eugene O'Neill Theatre Center in 1983. He repeated it the following year Off-Broadway and won an Obie Award. Turturro had a notable supporting role in William Friedkin's action film To Live and Die in L.A. (1985), as the henchman of the villainous counterfeiter played by Willem Dafoe.

Turturro has appeared in both comedy and drama films, and engaged in an extended collaboration with the Coen Brothers—he appeared in their films Miller's Crossing (1990), Barton Fink (1991, in the lead role), The Big Lebowski (1998), and O Brother, Where Art Thou? (2000). Turtutto has also appeared in several of Adam Sandler's movies, such as Mr. Deeds (2002) and You Don't Mess with the Zohan (2008). He played a severely disturbed patient of Jack Nicholson's character in the comedy Anger Management and played Johnny Depp's character's antagonist in Secret Window.[8]

Turturro hosted Saturday Night Live in 1994, where he spoofed his then-recently made film, Quiz Show, being told he was ineligible to host unless he answered questions in a booth and if he failed, the honor of hosting would go to Joey Buttafuoco, who was actually backstage to witness Turturro's test. He won an Emmy award for his portrayal of Adrian Monk's brother Ambrose in the USA Network series Monk, and reprised the role on numerous occasions. He has also been nominated and won many awards from film organizations such as Screen Actors Guild, Cannes Film Festival, Golden Globes and others.[8]

Turturro produced and directed, as well as acted in, the film Illuminata (1999), which also starred his wife, actress Katherine Borowitz. He wrote and directed the film Romance and Cigarettes (2005). In 2006 he appeared in Robert De Niro's The Good Shepherd, and as the Sector 7 agent Simmons in four films of the Transformers live-action series. In 2010, he directed (and had cameo on-screen appearances in) Passione, which chronicles the rich musical heritage of Naples, Italy.[citation needed]

His stage directorial debut was in October 2011, with the Broadway play Relatively Speaking, in which he guided an ensemble of veteran actors in a production of three comedic one-act plays, written by Elaine May, Woody Allen and Ethan Coen. The cast included Julie Kavner, Marlo Thomas, Mark Linn-Baker and Steve Guttenberg.[7]

Turturro's fifth directorial film Fading Gigolo premiered at the Toronto International Film Festival (TIFF) in mid-September 2013. Turturro also acts in the film alongside Woody Allen, who played a novice pimp overseeing the sex work of Turturro's character. During a September 2013 interview, Turturro expressed his intention to draw parallels between sex work and acting, explaining that the latter is a "service business" in which actors are "acting out people's wishes or fantasies."[6] In March 2014, Turturro received the Career Achievement tribute and award at the 31st Edition of the Miami International Film Festival at the Olympia Theater in Downtown Miami.[citation needed]

John Turturro participates as a member of the Jury for the New York International Children's Film Festival (NYICFF), which is dedicated to screening films for children between the ages of 3 and 18.[10] In January 2011, Turturro received his Italian passport, and holds dual Italian and U.S. citizenship.[11]