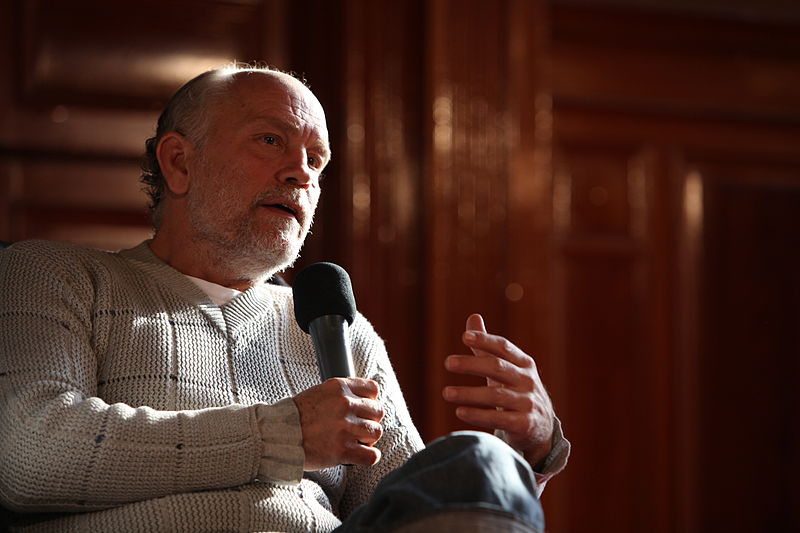 John Gavin Malkovich (born December 9, 1953) is an American actor, director, producer and fashion designer. He has appeared in more than 70 films.

For his roles in Places in the Heart and In the Line of Fire, he received Academy Award nominations. He appeared in such films as Empire of the Sun, The Killing Fields, Johnny English, Con Air, The Sheltering Sky, Of Mice and Men, Rounders, Ripley's Game, Knockaround Guys, Being John Malkovich, Shadow of the Vampire, Burn After Reading, Red, Red 2, Mulholland Falls, Dangerous Liaisons, and Warm Bodies, as well as producing films such as Ghost World, Juno, and The Perks of Being a Wallflower.

Malkovich was born in Christopher, Illinois. John Malkovich is of Montenegrin descent.[1] His mother was of French, German, Scottish and English ancestry.[2]

He grew up in Benton, Illinois, where his next door neighbor was future basketball star Doug Collins. His father, Daniel Leon Malkovich (1926-1980), was a state conservation director and publisher of Outdoor Illinois, a conservation magazine. His mother, Joe Anne (née Choisser; 1928-2009), owned the Benton Evening News, as well as Outdoor Illinois.[3][4][5] Malkovich has three younger sisters and an older brother.[6]

Malkovich attended Logan Grade School, Webster Junior High School, and Benton Consolidated High School. During his high school years, he appeared in various plays and the musical Carousel. He was active in a folk gospel group, singing in area churches and community events. As a member of a local summer theater/comedy project, he co-starred in Jean-Claude van Itallie's America Hurrah in 1972. Upon graduating from high school, he entered Eastern Illinois University, and then transferred to Illinois State University, where he majored in theater.[7]

In 1976, Malkovich, along with Joan Allen, Gary Sinise, and Glenne Headly, became a charter member of the Steppenwolf Theatre Company in Chicago.[3] He moved to New York City in 1980 to appear in a Steppenwolf production of the Sam Shepard play True West for which he won an Obie Award.[8]

In early 1982, he appeared in A Streetcar Named Desire with Chicago's Wisdom Bridge Theatre. Malkovich then directed a Steppenwolf co-production, the 1984 revival of Lanford Wilson's Balm in Gilead, for which he received a second Obie Award and a Drama Desk Award.[8] His Broadway debut that year was as Biff in Death of a Salesman alongside Dustin Hoffman as Willy. Malkovich won an Emmy Award[9] for this role when the play was adapted for television by CBS in 1985.

One of his first film roles was as an extra alongside Allen, Terry Kinney, George Wendt and Laurie Metcalf in Robert Altman's 1978 film A Wedding. He made his feature film debut in 1984 as Sally Field's blind boarder Mr. Will in Places in the Heart. For his portrayal of Mr. Will, Malkovich received his first Academy Award nomination for Best Supporting Actor. He also portrayed Al Rockoff in The Killing Fields.

He continued to have steady work in films such as Empire of the Sun, directed by Steve Spielberg, and the 1987 film adaptation of Tennessee Williams's The Glass Menagerie with Paul Newman and Joanne Woodward. He then starred in Making Mr. Right.

In 1990, he played Port Moresby in The Sheltering Sky, directed by Bernardo Bertolucci. In 1991, he was directed by Woody Allen in Shadows and Fog.

He garnered significant critical and popular acclaim when he portrayed the sinister and sensual Valmont in the 1988 film Dangerous Liaisons, a film adaptation of the stage play Les Liaisons Dangereuses by Christopher Hampton,[10] who had adapted it from the 1782 novel of the same title by Pierre Choderlos de Laclos. He later reprised this role for the music video of "Walking on Broken Glass" by Annie Lennox.[citation needed]

In 1990, he recited, in Croatian, verses of the Croatian national anthem Lijepa naša domovino (Our Beautiful Homeland) in Nenad Bach's song "Can We Go Higher?"[11]

Malkovich starred in the 1992 film adaptation of John Steinbeck's award-winning novella Of Mice and Men as Lennie alongside Gary Sinise as George. In 1994, he was nominated for another Oscar, in the same category, for In the Line of Fire. Though he played the title role in the Charlie Kaufman-penned Being John Malkovich, he played a slight variation of himself, as indicated by the character's middle name of "Horatio".

In 1996, Malkovich was directed for the second time (after Les liaisons Dangereuses) by Stephen Frears in Mary Reilly, a new adaptation of the Dr. Jekyll and Mr. Hyde tale, co-starring Julia Roberts[12] He made a cameo appearance in Adaptation. — also written by Kaufman — appearing as himself during the filming of Being John Malkovich. The Dancer Upstairs, Malkovich's directorial film debut, was released in 2002. In the same year he took the title role in Ripley's Game.[citation needed]. He also appeared inJoan of Arcdirected by Luc Bessonin 1999, playing the French king-to-be Charles VII.

Other film roles include The Hitchhiker's Guide to the Galaxy, Beowulf, Eragon, The Man in the Iron Mask, Transformers: Dark of the Moon, Changeling, Secretariat, RED and RED 2.[citation needed] In 2007, he played Alan Conway in Colour me Kubrik: a True...ish story , directed by Brian Cook. Malkovich has hosted three episodes of the NBC sketch show Saturday Night Live. The first occasion was in January 1989 with musical guest Anita Baker; the second in October 1993 with musical guest Billy Joel (and special appearance by former cast member Jan Hooks); and the third was in December 2008 with musical guest T.I. with Swizz Beatz (and special appearances by Justin Timberlake, Molly Sims and Jamie-Lynn Sigler). In 1993 he was also the narrator for the film Alive.[citation needed] In June 2018, Malkovich began filming a three-part adaptation of Agatha Christie's The A.B.C. Murders co-starring Rupert Grint for BBC television, playing the role of fictional Belgian detective Hercule Poirot.[13]

Malkovich created his own fashion company, Mrs. Mudd, in 2002. The company released its John Malkovich menswear collection, "Uncle Kimono", in 2003,[14] which was subsequently covered in the international press,[15] and its second clothing line, "Technobohemian", in 2010.[16] Malkovich designed the outfits himself.[17]

In 2008, directed by Michael Stürminger, he portrayed the story of Jack Unterweger in a performance for one actor, two sopranos, and period orchestra entitled Seduction and Despair, which premiered at Barnum Hall in Santa Monica, California.[19] A fully staged version of the production, entitled The Infernal Comedy premiered in Vienna in July 2009. The show has since been performed in 2009, 2010, 2011 and 2012 throughout Europe, North America and South America.[20]

Malkovich was also directed by the Austrian director Michael Stürminger in Casanova's Variations and its movie adaptation in 2014 (co-starring Fanny Ardant).[21] For their third collaboration, in 2017, Michael Stürminger directed Malkovich in Just Call me God - the final speech. John played a Third World dictator called Satur Dinam Cha who is about to be overthrown.[22]

Also in 2008, Malkovich played the title role in the film The Great Buck Howard, a role inspired by the mentalist The Amazing Kreskin. Colin Hanks co-starred and his father, Tom Hanks, appeared as his on-screen father. In November 2009, Malkovich appeared in an advertisement for Nespresso with fellow actor George Clooney. He portrayed Quentin Turnbull in the film adaption of Jonah Hex.[23]

In 2009, Malkovich was approached for the role of the Marvel Comics villain Vulture in the unproduced Spider-Man 4. In 2011, he directed Julian Sands in A Celebration of Harold Pinter in the Pleasance Courtyard, Edinburgh for the Edinburgh Festival Fringe.[24][25]

In 2008, Malkovich directed in French Good Canary written by Zach Helm, with Cristiana Realli and Vincent Elbaz in the leading roles. Malkovich won the Molière Award best director for it. He also directed it in Spanish in Mexico then in English at the Rose Theater in London in 2016. Ilan Goodman, Harry Lloyd and Freya Mavor were in the cast. Malkovich won the Milton Schulman Award for the best director at the Evening Standard Theater Awards in 2016.[26][27]

In 2012, he directed a production of a newly adapted French-language version of Les Liaisons Dangereuses for the Théâtre de l'Atelier in Paris.[28] The production had a limited engagement in July 2013 at the Lincoln Center for the Performing Arts in New York City.[29]

In 2016, Malkovich wrote and stars in a movie called "100 years: the movie you will never see" directed by Robert Rodriguez. The movie is locked in a vault in the south of France not to be seen before 2115.[30]

Malkovich stars in his first video game role in Call of Duty: Advanced Warfare in the "Exo Zombies" mode.[32] He appeared in the music video for Eminem's single "Phenomenal". In 2017, he appeared in some humorous Super Bowl commercials portraying himself attempting to gain control of the johnmalkovich.com domain.[33]

Malkovich at the Karlovy Vary International Film Festival in July 2009

Malkovich was married to actress Glenne Headly from 1982-88. They divorced after Malkovich became involved with Michelle Pfeiffer on the set of Dangerous Liaisons.[34][35] He later met his long-term partner Nicoletta Peyran on the set of The Sheltering Sky, where she was the second assistant director, in 1989. They have two children, Amandine and Loewy.[36]

Malkovich is known for his distinctive voice, which The Guardian describes as wafting, whispery, and reedy.[36]

He does not consider himself to be a method actor.[37] He is fluent in French, and for nearly 10 years, he worked in a theater in Southern France. He and his family left France in a dispute over taxes in 2003,[38] and he has since lived in Cambridge, Massachusetts.[39]

He is co-owner of the restaurant Bica do Sapato and Lux nightclub in Lisbon.[40]

Malkovich lost millions of dollars in Bernard Madoff's Ponzi scheme when it collapsed in 2008.[41][42] He has raised funds for the Steppenwolf Theater Company, his sole charity.[43]

Malkovich stated in a 2011 interview that "I'm not a political person ... I don't have an ideology". He said that he had not voted since George McGovern lost his presidential run in 1972.[44]

When asked in an interview with the Toronto Star whether it was necessary to have spiritual beliefs to portray a spiritual character, Malkovich said, "No, I'd say not... I'm an atheist. I wouldn't say I'm without spiritual belief particularly, or rather, specifically. Maybe I'm agnostic, but I'm not quite sure there's some great creator somehow controlling everything and giving us free will. I don't know; it doesn't seem to make a lot of sense to me."[45]

In 2002, at the Cambridge Union Society, when asked whom he would most like to fight to the death, Malkovich replied that he would "rather just shoot" journalist Robert Fisk and politician George Galloway, both pro-Palestinians, outspoken in their criticism and opposition of Israel and the then-imminent war in Iraq.[46][47] Both Fisk and Galloway reacted with outrage.[48][49]

On June 6, 2013, he applied pressure to reduce bleeding from the neck of a 77-year-old man who had tripped in the streets of Toronto and slashed his throat on scaffolding as he fell. The man was rushed to a hospital, where he received stitches and later credited Malkovich with saving his life.[50][51]