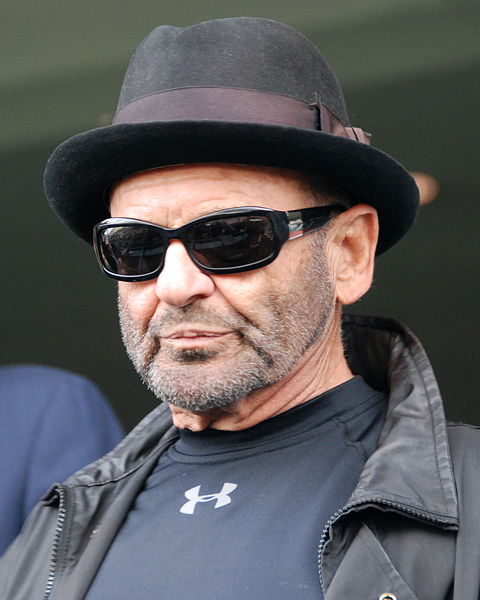 Joseph Frank Pesci (/ˈpɛʃi/ PESH-ee; born February 9, 1943) is an American actor, comedian and singer. Known for portraying tough, volatile characters, in a variety of genres, he is best known for his role as Vincent Gambini in My Cousin Vinny (1992), Harry Lime in Home Alone and Home Alone 2: Lost in New York, as Leo Getz in the Lethal Weapon franchise, and for co-starring with Robert De Niro in the Martin Scorsese films Raging Bull (1980), Goodfellas (1990), and Casino (1995).

Pesci won the Academy Award for Best Supporting Actor for his role as the psychopathic gangster Tommy DeVito (based on Thomas DeSimone) in Goodfellas; he had been previously nominated for the same award for his role as Joey LaMotta in Raging Bull. Also a comedian, Pesci has starred in a number of other high-profile films, including Easy Money (1983), Once Upon a Time in America (1984), Moonwalker (1988), JFK (1991), and A Bronx Tale (1993). He announced his retirement from acting in 1999, and since then he has appeared only occasionally in films, including a cameo appearance in the 2006 spy thriller The Good Shepherd, directed by De Niro, and in the biographical crime film The Irishman. He is also known for his studio album Vincent LaGuardia Gambini Sings Just for You.

Pesci was born on February 9, 1943, in Newark, New Jersey. His mother, Mary (née Mesce), worked part-time as a barber, and his father, Angelo Pesci, was a forklift driver for General Motors and a bartender.[1][2] Pesci, of Italian descent, was raised in Belleville, New Jersey, and attended Belleville High School. By the time Pesci was five years old, he was appearing in plays in New York.[1] At age 10, he was a regular on a television variety show called Startime Kids, which also featured Connie Francis.[1]

As a teenager, Pesci was friends with singers Frankie Valli (who was nine years his senior) and Tommy DeVito (who was 15 years his senior), and in 1959, at age 16, he helped introduce them to singer and songwriter Bob Gaudio, which led to the formation of the band the Four Seasons.[3]

In the 1960s, Pesci began working as a barber, following in his mother's footsteps. At the same time, he tried to start a musical career, playing guitar with several bands, including Joey Dee and the Starliters who introduced the "Peppermint Twist" record, dance, and Peppermint Lounge in NYC. When he left the band, he was replaced by Jimi Hendrix.[citation needed]

In 1968, he released his debut album Little Joe Sure Can Sing! (billed as Joe Ritchie), on which he sang covers of contemporary pop hits.[4]

In the late 1960s and early 1970s, Pesci joined fellow actor Frank Vincent in performing in local clubs including the Arlington Lounge and other venues around North Jersey as Vincent and Pesci. The comedy duo's material was a play on Martin and Lewis and Abbott and Costello. In 1975, they appeared in the Broadway show The New Vaudevillians, which only lasted one week.[4]

The first film Pesci starred in was the 1976 low-budget crime film The Death Collector alongside Frank Vincent. After the film Pesci returned to The Bronx and lived above Amici's Restaurant, where he was an employee.[4]

In 1979, Pesci got a telephone call from Martin Scorsese and Robert De Niro, who were impressed with his performance in The Death Collector and asked him to co-star in Scorsese's Raging Bull as Joey LaMotta. Pesci won the BAFTA Film Award for Newcomer to Leading Film Roles in 1981 and was nominated for an Academy Award for Best Supporting Actor. Over the next few years, Pesci appeared in several smaller films, including Dear Mr. Wonderful (1982), Easy Money (1983) and Eureka (1983).[4]

In 1984, he was cast in Once Upon a Time in America, again appearing alongside De Niro. The following year he starred as private detective Rocky Nelson in the short-lived television comedy series Half Nelson.[4]

In 1988, Pesci appeared in the Michael Jackson musical anthology film Moonwalker, in the film's sixth and longest segment, "Smooth Criminal." He played the antagonist, crime boss Frankie "Mr. Big" LiDeo (an anagram for one of the film's producers and longtime Jackson manager Frank DiLeo,[5] with whom Pesci later acted in Goodfellas).[6]

He appeared as Leo Getz, a comedic sidekick and best friend to protagonist detectives Martin Riggs (Mel Gibson) and Roger Murtaugh (Danny Glover) in the Lethal Weapon sequels, released in 1989, 1992 and 1998.

In 1990, he reunited with Scorsese and De Niro for Goodfellas, wherein he played mobster Tommy DeVito, based on real-life mobster Thomas DeSimone. (Tommy DeVito is also the name of Pesci's old acquaintance from Belleville, New Jersey, and a member of The Four Seasons, but contrary to popular belief, the naming is coincidental.[3]) Old friend Frank Vincent also appears in the film; Pesci's character kills Vincent's character in a rage in one of the best-remembered scenes in the film after the Vincent character contemptuously tells him to "go home and get your shine box." Pesci received the Academy Award for Best Supporting Actor for the role, which he accepted with one of the shortest speeches in Oscar history, saying simply, "It's my privilege. Thank you" before leaving the stage.[6][7]

Pesci also co-starred in the blockbuster Home Alone in 1990, playing Harry Lime, one of two bumbling burglars (along with good friend Daniel Stern) who attempt to burgle the house of the young character played by Macaulay Culkin. During filming of the film's climactic scene, Pesci accidentally bit one of Culkin's fingers, giving him a scar. Two years later, Pesci reprised his role in the sequel Home Alone 2: Lost in New York.

Pesci played David Ferrie in 1991's JFK. In 1992 he appeared as the title character in the comedy My Cousin Vinny with Ralph Macchio, Marisa Tomei and Fred Gwynne. The same year, Pesci spearheaded the cast of The Public Eye as Leon "Bernzy" Bernstein, a photographer. His performance in the film, a departure from his usual characters, was critically acclaimed.

Pesci hosted sketch comedy show Saturday Night Live on October 10, 1992, while doing publicity for My Cousin Vinny. During his monologue, he restored a picture of Pope John Paul II that had been torn by Sinéad O'Connor on the previous broadcast.[8]

Pesci had a small role in 1993's A Bronx Tale as Carmine. The film starred Robert De Niro and Chazz Palminteri, both of whom made the film and personally offered Pesci the role. In 1995, Pesci had his third collaboration with Scorsese and De Niro in the film Casino, playing Nicky Santoro, based on real-life Mob enforcer Anthony Spilotro, along with Sharon Stone and James Woods; Pesci had previously co-starred with the latter in Once Upon a Time in America. In 1996, Pesci was considered to play Myron Larabee, the stressed-out postman, in Jingle All the Way opposite Arnold Schwarzenegger, but the part was ultimately given to Sinbad, whose physical size was more comparable to Schwarzenegger's.

Other work and retirement from acting

In 1998, he released his second album, and his first in 30 years, Vincent LaGuardia Gambini Sings Just for You, which was named after his character from the 1992 film My Cousin Vinny. The album was both humorous and serious, exploring a variety of genres, though most of it was big band jazz. The album spawned the single "Wise Guy," a rap number that played on the gangsta theme by making reference to Mafia gangsterism. "Wise Guy" interpolated the 1980 hit "Rapture" by Blondie, and was co-written and produced by the hip-hop production team the Trackmasters.

In 1999, Pesci announced his retirement from acting to pursue a musical career and to enjoy life away from the camera. He returned to acting when he did a cameo in De Niro's 2006 film The Good Shepherd. In 2010, he starred in the brothel drama Love Ranch, alongside Helen Mirren.[9]

Pesci appeared with Don Rickles in a 2011 Snickers advertisement in which he portrays the angry alter ego of a young man who attends a party and becomes agitated by two women until he is calmed down by eating a Snickers bar.[10]

In 2011, Pesci sued Fiore Films, the producers of the film Gotti, for having broken their promise to cast him in that film as real-life mobster Angelo Ruggiero.[11] Pesci stated that he had gained 30 pounds (14 kg) for the role.[11] He sued them for $3 million, which was the payment he had been promised.[11] The lawsuit was settled out of court in 2013 for an unspecified sum,[11] and the role, after many production delays, eventually went to Pruitt Taylor Vince.

Pesci appears in the 2016 music documentary Jimmy Scott: I Go Back Home in which he is filmed recording "The Folks Who Live on the Hill" from Scott's forthcoming posthumous album I Go Back Home.

In 2017, Pesci was confirmed to be starring in The Irishman with long time collaborators Robert De Niro and Martin Scorsese. The film is planned for release in 2019 and will be distributed by Netflix.[12]

Pesci is a character in the 2005 musical Jersey Boys, which tells the story of The Four Seasons, due to his involvement in the band's formation. He is similarly a character in the musical's 2014 film adaptation. In the film, the Joe Pesci character asks "Funny how?", a quote from a famous line of dialogue Pesci had in Goodfellas.

Pesci was briefly a recurring character on Saturday Night Live, played by Jim Breuer. Breuer’s characterization was based on Pesci’s ‘’GoodFellas’’ character, re-imagined as a talk show host, but maintaining Tommy DeVito’s violent temper, often beating his guests with a baseball bat. This recurring gag eventually culminated in the real Pesci appearing in a cameo and beating Breuer with a bat.

In his 1999 comedy show entitled You Are All Diseased, George Carlin mentioned Joe Pesci as the figure he'd pray to in order to get his wishes accomplished, as opposed to God, in a segment deriding religions for "false promises and exaggerated claims". He says that Pesci, beside being a good actor, "looks like a guy who can get things done", adding "Joe Pesci doesn't fuck around! In fact, Joe Pesci came through on a couple of things that God was having trouble with. For years I asked God to do something about my noisy neighbour with the barking dog... Joe Pesci straightened that cocksucker out with one visit. It's amazing what you can accomplish with a simple baseball bat!"