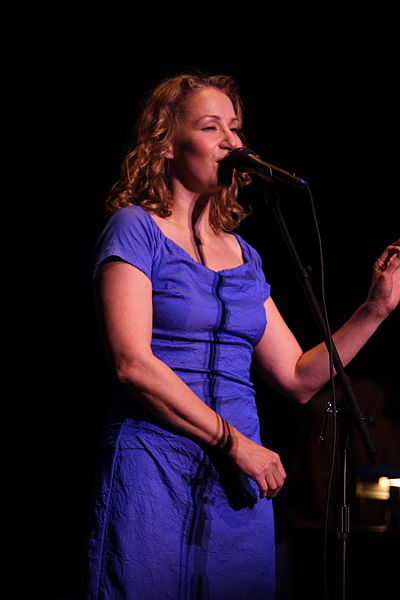 Joan Elizabeth Osborne (born July 8, 1962) is an American singer, songwriter, and interpreter of music, having recorded and performed in various popular American musical genres including pop, soul, R&B, blues, and country.[1] She is best known for her recording of the Eric Bazilian song "One of Us". She has toured with Motown sidemen the Funk Brothers and was featured in the documentary film about them, Standing in the Shadows of Motown.

Originally from Anchorage, Kentucky, a suburb of Louisville, Osborne moved to New York City in the late 1980s, where she formed her own record label, Womanly Hips, to release a few independent recordings. She signed with Mercury Records, and released her first full-length album, Soul Show: Live at Delta 88, in 1991. Her second (and first major label) album was Relish (1995), which became a hit on the strength of the single "One of Us". "Right Hand Man" and "St. Teresa" were minor hits, and "Spider Web" also received radio play. Osborne is bisexual.[2] Her song "After Jane", on the album Pretty Little Stranger, touches on this as it is about a relationship between herself and a woman.

In 2001, Osborne appeared on Austin City Limits, singing material mainly from Righteous Love. In a brief interview segment at the end of the episode, Osborne reflects on her gladness to have gotten out of the limelight of her mid-'90s stardom. She was featured in the 2002 documentary film, Standing in the Shadows of Motown, and toured with Motown sidemen the Funk Brothers. She and her band accompanied the Dixie Chicks for a national tour in the summer of 2003, during which time she also joined veteran San Francisco jam-rockers The Dead as a vocalist, and released her fourth album, titled How Sweet It Is, a collection of classic rock and soul covers.

During 2005 and 2006, Osborne performed on numerous occasions with Phil Lesh and Friends. Her vocals were featured prominently on the album Live at the Warfield. She continues to make appearances with the band.

In February 2007, she appeared on the Grand Ole Opry. In May 2007, she issued Breakfast in Bed produced by Tor Hyams, a return to the soul music that she had covered on How Sweet It Is. Breakfast in Bed also featured the two songs ("Heatwave" and "What Becomes of the Brokenhearted") that she had covered for the film Standing in the Shadows of Motown. The same year, Osborne appeared as a featured guest in the third season of the Transatlantic Sessions television series, performing "Saint Teresa", "Holy Water", and "Please Don't Tell Me How the Story Ends".

Osborne sang lead vocals on the cover of the Willie Dixon-penned "Spoonful" on Vivian Campbell's solo album Two Sides of If. She also provided some vocals for "Wayfaring Stranger" on Spearhead's 1997 album Chocolate Supa Highway. She covered Dolly Parton's "Do I Ever Cross Your Mind" on the 2003 tribute album Just Because I'm a Woman: Songs of Dolly Parton. She is featured on the Holmes Brothers 2007 collection State of Grace performing "Those Memories of You", an old Alan O'Bryant bluegrass tune. Her album, Little Wild One, was released in September 2008. Osborne performs as a guest vocalist on Sgt. Pepper Live, the 2009 album and DVD by Cheap Trick. In 2010, she was awarded the Woman of Achievement Award from Women's Project Theater.[3] She performed with The Waybacks at Merlefest, 2011, during the Hillside Album hour, featuring The Allman Brothers' Eat a Peach.

Her album Bring It On Home was released on March 27, 2012.[4] It is a collection of vintage blues and soul covers, and it received a 2013 Grammy Awards nomination for Best Blues Album. In September 2012, Osborne was featured in a campaign called "30 Songs / 30 Days" to support Half the Sky: Turning Oppression into Opportunity for Women Worldwide, a multi-platform media project inspired by Nicholas Kristof and Sheryl WuDunn's book.[5]

On October 31, 2015, Joan Osborne and Mavis Staples performed in Washington, D.C. at The George Washington University's Lisner Auditorium as part of their Solid Soul Tour.[7]

Raised a Roman Catholic, Osborne distanced herself from that institution after childhood, particularly influenced by telling her parents that she wished to become a priest only to learn that tradition forbade it. As an adult, she regards herself as skeptical of large-scale organized religion and identifies as a "spiritual person" directly influenced by both Buddhism and Christianity.[8] Originally from Anchorage, Kentucky, a suburb of Louisville, Osborne moved to New York City in the late 1980s, Osborne has stated that she feels a particular attachment to the city, particularly the borough of Brooklyn. Her interest in her neighborhood's culture, history, and society has multiple influences on her music. As well, she has expressed admiration for American poetry, especially the works of Walt Whitman, and cited that as a major inspiration for her songwriting.[8]