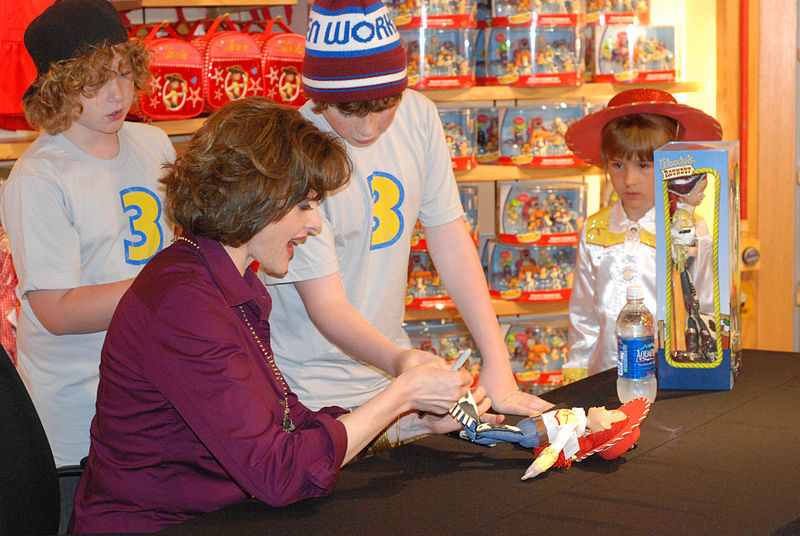 Joan Mary Cusack (/ˈkjuːsæk/; born October 11, 1962)[2] is an American actress. She received Academy Award nominations for Best Supporting Actress for her roles in the romantic comedy-drama Working Girl (1988) and the romantic comedy In & Out (1997), as well as one Golden Globe nomination for her performance in the latter. She is also the voice of Jessie in the Toy Story franchise.

Cusack was a cast member on the comedy sketch show Saturday Night Live from 1985 to 1986. She starred on the Showtime hit drama/comedy Shameless as Sheila Gallagher (née Jackson), a role for which she has received five consecutive Emmy Award nominations, winning for the first time in 2015. She is the sister of actress Ann Cusack and actor John Cusack.

In the film Addams Family Values, she played serial divorcee and murderer Debbie Jellinsky. She also starred in the short-lived ABC sitcom What About Joan? in 2001-02 and the hit film Arlington Road. For many years, Cusack was also the commercial spokeswoman for U.S. Cellular. One of Cusack's most well-known roles was the head teacher of Horace Green Elementary School, Rosalie 'Roz' Mullins, in School of Rock. She also voiced Jessie in Toy Story 2 and Toy Story 3, and played Dr. Burton, the therapist of Charlie (Logan Lerman), in the teen film The Perks of Being a Wallflower (2012).

Cusack was a cast member on the NBC sketch show Saturday Night Live from 1985 to 1986. Her recurring characters on SNL included Salena, a socially inept girl who tries to ask out her boyfriend, Biff (played by Jon Lovitz), who is also socially inept. In addition, she did celebrity impersonations of Brooke Shields, Jane Fonda, and Queen Elizabeth II.

She has been nominated four times for the American Comedy Award in the category of Funniest Supporting Actress in a Motion Picture and has won three times, for Runaway Bride (1999), In & Out (1997), and Working Girl (1988). She has also won the New York Film Critics Circle Award and the Broadcast Film Critics Association Award for Best Supporting Actress for In & Out.

In 2010, Cusack joined the Showtime drama/comedy Shameless as Sheila Gallagher (née Jackson) the mother of Karen Jackson (Laura Slade Wiggins). The first season premiered on January 9, 2011, and had its first finale March 27, 2011. Cusack replaced actress Allison Janney, who originally portrayed the role in the first edit of the pilot episode, but was forced to drop out of the part owing to her series regular commitment on the ABC comedy Mr. Sunshine. Janney took the role with the understanding the character would be less prominent on the show, but when producers decided to increase the character's screen presence, she was forced to pull out of the part. Cusack has received critical acclaim for her performance, receiving Primetime Emmy Award for Outstanding Guest Actress in a Drama Series nominations in 2011, 2012, and 2013, as well as a nomination for the Primetime Emmy Award for Outstanding Guest Actress in a Comedy Series in 2014 and 2015, winning in the later year.

Cusack married attorney Richard Burke, President and CEO of Envoy Global, Inc. in 1996. They have two sons: Dylan John (b. 1997) and Miles (b. 2000). She discovered she was pregnant with her first son, Dylan, on her first day of shooting the movie Mr. Wrong (1996). Cusack owns a home in Three Oaks Township, Michigan, and lives in Chicago, Illinois.

In 2003, both Joan and her brother John signed the "Not in My Name" resolution (along with people such as Noam Chomsky and Susan Sarandon) opposing the invasion of Iraq.