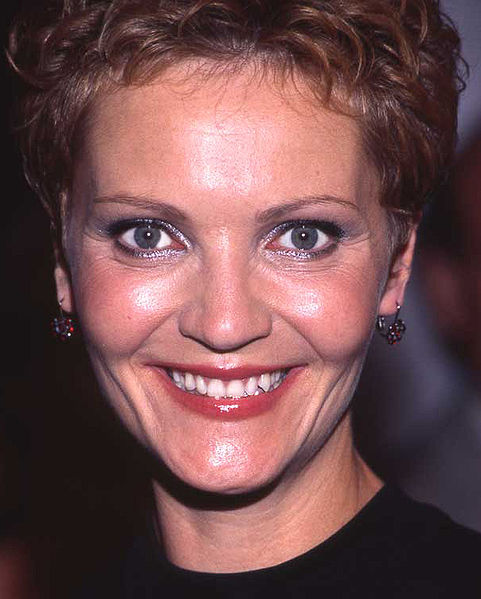 Joan Allen (born August 20, 1956) is an American actress. She began her career with the Steppenwolf Theatre Company in 1977, won the 1984 Drama Desk Award for Outstanding Actress in a Play for And a Nightingale Sang, and won the 1988 Tony Award for Best Actress in a Play for her Broadway debut in Burn This. She is also a three-time Academy Award nominee; receiving Best Supporting Actress nominations for Nixon (1995) and The Crucible (1996), and a Best Actress nomination for The Contender (2000).

Allen, the youngest of four children, was born in Rochelle, Illinois, the daughter of Dorothea Marie (née Wirth), a homemaker, and James Jefferson Allen, a gas station owner.[1][2] She has an older brother, David, and two older sisters, Mary and Lynn.[3] Allen attended Rochelle Township High School, and was voted most likely to succeed.[citation needed] She first attended Eastern Illinois University, performing in a few plays with John Malkovich, who was also a student, and then Northern Illinois University, where she graduated with a Bachelor of Fine Arts degree in theater.

Allen began her performing career as a stage actress and on television before making her film debut in the movie, Compromising Positions (1985). She became a member of the Steppenwolf Theatre Company ensemble in 1977 when John Malkovich asked her to join.[4] She's been a member ever since. In 1984, she won a Clarence Derwent Award for her portrayal of Hellen Stott in And a Nightingale Sang.[citation needed]

In 1989, Allen won a Tony Award for her Broadway debut performance in Burn This.[5] She also starred in the Pulitzer Prize-winning play The Heidi Chronicles.[6]

She received Academy Award nominations for Best Supporting Actress for her roles as Pat Nixon in Nixon (1995) and as Elizabeth Proctor, a woman accused of witchcraft, in The Crucible (1996). She was also nominated for Best Actress for her role in The Contender (2000), in which she played a politician who becomes the object of scandal.[citation needed]

She had starring roles in the drama The Ice Storm, directed by Ang Lee, and the action thriller Face/Off, directed by John Woo, both released in 1997, as well as in the comedy Pleasantville (1998).

In 2001, Allen starred in the mini-series The Mists of Avalon on TNT and earned an Primetime Emmy Award nomination[7] for the role.[citation needed] In 2005, she received many positive notices[citation needed] for her leading role in the comedy/drama The Upside of Anger, in which she played an alcoholic housewife.

In 2009, Allen starred as Georgia O'Keeffe in Lifetime Television's 2009 biopic chronicling the artist's life. Allen returned to Broadway in March 2009, when she played the role of Katherine Keenan in Michael Jacobs' play Impressionism opposite Jeremy Irons at the Gerald Schoenfeld Theatre.[9]

In 2015, Allen signed for the leading role in the ABC drama series, The Family, playing the role of villainous and manipulative mayor and matriarch of her family.[12]

Allen is set to play Ellen Fine in the Broadway premiere production of the Kenneth Lonergan play The Waverly Gallery in 2018.

In 1990, Allen married actor Peter Friedman. They divorced in 2002 but live close to each other to share time with their daughter, Sadie, born in February 1994.[13]