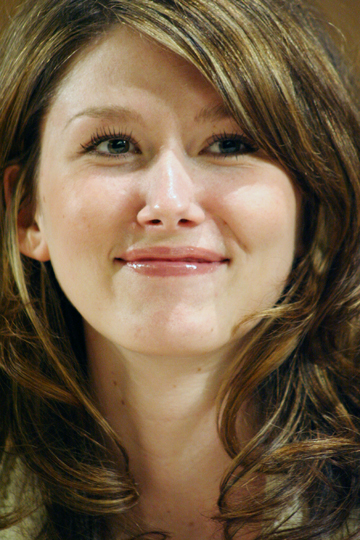 Jewel Belair Staite (born June 2, 1982) is a Canadian actress. She is known for her roles as Kaylee Frye in the Fox television series Firefly (2002-03) and its spin-off theatrical film Serenity (2005), and as Dr. Jennifer Keller on Sci-Fi Channel's science-fiction television series Stargate Atlantis (2007-09). Staite also starred in her youth as Catalina in Space Cases (1996) and as "Becca" Fisher in Flash Forward (1996-97), and more recently as Raquel Westbrook in the Canadian drama The L.A. Complex (2012) and Caroline Swift in AMC's crime drama The Killing (2013-14).

Staite was born in White Rock, British Columbia. The youngest of seven children, she modeled as a child and has acted since age six. She has stated that she is of British, Irish, French Canadian, and Iroquois ancestry.[1] Staite attended the Vancouver Film School and worked at the Vancouver Youth Theatre.[2]
Read more...

Staite began her career as a child actress, with appearances in television movies such as CBC's Liar, Liar in 1993 (which was later reaired in the United States the same year on CBS),[3] and ABC's The Only Way Out.[4] In 1995, Staite had a key guest starring role in the third-season episode of The X-Files, "Oubliette".

Staite at the 2005 Serenity Flanvention

Staite's first co-starring role on a television series was as Catalina, the ship's engineer, in the first season of Nickelodeon science fiction television series Space Cases in 1996. This was immediately followed by her role as Rebecca "Becca" Fisher on the 1995-97 Disney Channel series Flash Forward, a series in which Staite was the co-lead with Ben Foster.[5]

In 2000, she was cast in a main role on the FOX Family Channel drama series Higher Ground.[6] She was a voice actress in the animated TV series Mummies Alive! and Sabrina: The Animated Series for DIC Entertainment.

Staite played Kaylee Frye in the short-lived television series Firefly[7][8] and its subsequent 2005 film, Serenity.[9] She wrote a chapter in the book Finding Serenity, called "Kaylee Speaks: Jewel Staite On Firefly".[10] She played the recurring role of Heidi Gotts in the television series Wonderfalls in 2004.

Staite played the role of head medical doctor Jennifer Keller in the Stargate SG-1 spinoff Stargate Atlantis,[11] making her the third actor from the Firefly series to move on to appear in a Stargate series (the first being Adam Baldwin, who had a brief role as a colonel in the Stargate SG-1 Season Seven episode "Heroes", and the second being Morena Baccarin, who played Adria, the main villain in the tenth season of SG-1), and the second to take a recurring role. She replaced Paul McGillion (Dr. Carson Beckett). In the fifth season of Stargate, her character was changed from recurring status to part of the main cast. Before taking on the role as Dr. Keller she previously played the Wraith child Ellia in the Stargate Atlantis episode "Instinct".[12] She also appeared in the 2010 Sci-Fi film, Mothman, under direction from Sheldon Wilson.[10][13] Also in 2010, Staite guest starred in an episode of Warehouse 13 as the love interest of Sheldon (played by Sean Maher, who played her love interest in Firefly), and in 2011, she guest-starred on an episode of Supernatural as a former love-interest of Sam's.[14]

In 2012, Staite was a series regular on The L.A. Complex, in which she portrayed Raquel Westbrook, a struggling actress.[15] The show aired in Canada on CTV and MuchMusic and in the U.S. on The CW.[16] She also appeared recently in an episode of The Listener. Staite appeared in 10 episodes of the AMC crime drama, The Killing, as Detective Stephen Holder's girlfriend Caroline Swift, from 2013-14.[17]