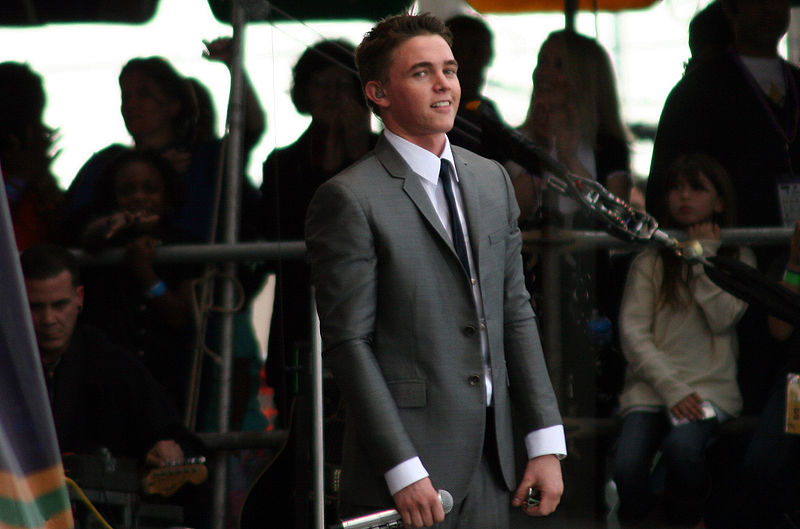 Jesse McCartney (born April 9, 1987) is an American singer, songwriter, and actor. He achieved fame in the late 1990s on the daytime drama All My Children as JR Chandler. He later joined boy band Dream Street, and eventually branched out into a solo musical career. Additionally, McCartney has appeared on shows such as Law & Order: SVU, Summerland, and Greek. McCartney also is known for lending his voice as Theodore in Alvin and the Chipmunks and its sequels, as well as voicing Robin/Nightwing in Young Justice and Roxas and Ventus in the video game series Kingdom Hearts developed by Square Enix.

McCartney was born on April 9, 1987, in Ardsley, Westchester, New York, the son of Ginger (Sarber) and Scott McCartney.[1][2] He began performing in local community musicals at the age of seven, before joining the national tour of The King and I at age ten along with Phil of the Future star Ricky Ullman. There he played the character of Louis. In 1998, he sang with the group Sugar Beats and can be heard on their 1998, 1999, and 2000 CD releases.[3]
Read more...

In 1999, McCartney joined the American pop boy band Dream Street, and was a member until 2002. He has described the experience as a good "stepping stone" for his solo career.[4] The group earned a gold record with their debut CD. At fifteen, he began work on a solo career with a local band, featuring musicians Dillon Kondor (guitar), Peter Chema (bass), Katie Spencer (keyboards), Alex Russeku (drums), Karina LaGravinese (background vocals), Sharisse Francisco (background vocals), and under the management of Ginger McCartney and Sherry Goffin Kondor, who co-produced his first album, Beautiful Soul.

McCartney released his first solo EP in July 2003. The album featured three songs: "Beautiful Soul", "Don't You", "Why Don't You Kiss Her". In 2004, he performed a duet with Anne Hathaway, "Don't Go Breaking My Heart", which is featured on the Ella Enchanted soundtrack.

McCartney's debut solo album, Beautiful Soul, which was two years in the making, was released on September 28, 2004, in the United States and over a year later in Europe.[5] He categorized it as a "pop record" with twists of urban.[6] The album featured four songs that he co-wrote.[7] Beautiful Soul reached number 15 on the Billboard 200.[8] The album has been certified platinum by the Recording Industry Association of America, denoting over one million units of shipment to US retailers; it is his highest-certified album as of early 2009.[9] By mid-2006, the album had sold more than 1.5 million copies.[7] The album's lead single of the same name reached number 16 on the Billboard Hot 100.[8] McCartney was one of the artists to win multiple awards at the 2005 Teen Choice Awards, including Choice Crossover Artist, Choice Male Artist and Choice Breakout, Male.[10] The following year, he won Favorite Male Singer at the Nickelodeon Kids' Choice Awards.[7]

His first headlining tour, also named Beautiful Soul, began on May 2, 2005 at the Crest Theatre in Sacramento, California.[6] The United States portion of the tour spanned 56 stops, ending on September 10, 2005 at the Madera District County Fair in Madera, California. In the fall of 2005, McCartney toured Australia, and opened for the Backstreet Boys in Europe in the summer of 2005. His July 9 performance at California's Great America in Santa Clara, California was recorded, released as Live: The Beautiful Soul Tour in November 2005.[5]

After the filming of Keith wrapped, McCartney began working on his second album, Right Where You Want Me, co-writing all but one of the songs featured in it.[7][11] Right Where You Want Me is more mature than his debut, reflecting his musical and personal growth since he recorded his debut album at age 15.[5] Released by Hollywood Records on September 19, 2006, the album reached number 14 on the Billboard 200.[8] The lead single of the album, "Right Where You Want Me", began receiving airplay on July 11, 2006. Although he did not launch a full tour, he did various promotional shows in Italy and the United States.

In the fall of 2007, McCartney co-wrote the hit song "Bleeding Love" with Ryan Tedder of OneRepublic, produced by McCartney and Tedder for McCartney's third album, but gave it away to British singer Leona Lewis for her debut album, Spirit. The song was nominated for Record of the Year at the 2009 Grammy Awards.[12] McCartney recorded his own version, which was released on some editions of his Departure album.

McCartney released his third album, Departure, on May 20, 2008 in the United States and Canada. Musically, it is a departure from his early works, showcasing more mature themes.[13] The album has reached number 14 on the Billboard 200.[8]

The album's lead single, "Leavin'", was released in March 2008, and reached number 10 on the Billboard Hot 100, giving McCartney his highest-charting single to date.[8] The single was certified platinum by the RIAA, selling over two million downloads on iTunes, becoming McCartney's highest-certified single as of early 2009.[9] The second single, "It's Over", was released on August 26, 2008, and reached #62 on the Hot 100. McCartney promoted Departure on a co-headlining tour with Jordin Sparks, which began in August 2008 and ended in September. He also did solo shows at theaters and small venues to support the album while on tour with Sparks. Sparks also approached him to write some material for her.[14]

McCartney at the 2010 Tribeca Film Festival.

The lead single from his fourth studio album Have It All, "Shake", was sent to radio on September 8, 2010 and was released digitally on September 21, 2010. The song peaked at #54 on the Hot 100. On October 18, 2010, it was announced that Have It All would be released in January 2011.[15] On November 30, it was announced that the album release would be pushed up to December 28, 2010, the Tuesday following Christmas. On December 3, 2010, McCartney announced through his Facebook page that he pushed the release date for the album back to early 2011. On April 7, 2011, McCartney responded to a question on his Twitter page about the delay, saying "The Release of Have It All has been put on hold until we hear about the outcome of Locke & Key", the television series in which he had a lead role.[16] On November 3, McCartney said via his WhoSay page "2012 is still the magic year for the record to finally come out."[17] On May 6, 2012, McCartney's mother said on Twitter that the replacement of the President of his label, Hollywood Records in January, 2012 is delaying the release of his album.[18] In the March 2013 issue of Glamouholic magazine that he has covered, an exclusive interview was conducted and he confirmed the release of his anticipated fourth studio album, after all the disbandments of his record label, within this year. Have It All, however, would go on to never be officially released.[19]

On May 13, it was confirmed on On Air with Ryan Seacrest that McCartney will be joining the Backstreet Boys & DJ Pauly D on their new tour "In a World Like This" kicking off on August 2, 2013. On August 13, the singer released the lead single "Back Together" from his upcoming album which will be on his new independent label, Eight0Eight Records. He performed it live on the Today show on August 15, 2013. On December 10, 2013, McCartney released a four-song EP titled In Technicolor, Part 1 with the as-yet-untitled album to follow in Spring 2014. He says this album will be an "authentic 70s disco-pop record."[20] On May 6, 2014, McCartney released a new single titled "Superbad" and released the music video soon afterwards.[21]

On March 23, 2018, McCartney announced the release of his new single "Better With You" which would be the lead single of his upcoming album.[23][24] Actress Danielle Campbell appears in the music video as his muse.

McCartney appeared with The Who's Roger Daltrey in A Christmas Carol at Madison Square Garden. From 1998-2001, McCartney played Adam Chandler, Jr. in the ABC soap opera All My Children, a role for which he earned two Young Artist Awards and two Daytime Emmy Award nominations.[25] He also later starred in the short-lived series Summerland, which aired on The WB for two seasons, playing orphaned teenager Bradin Westerly.

McCartney on the Live! With Regis and Kelly TV show, April 2009.

In 2008, McCartney co-starred along with Elisabeth Harnois in an independent teenage drama feature film, Keith, directed by Todd Kessler. It is his movie debut, and features McCartney in the title role. Keith was released on September 19, 2008.

According to Entertainment Weekly in December 2008, McCartney was negotiating to play against type in the role of the Fire Nation's Prince Zuko in M. Night Shyamalan's feature film adaptation of Avatar: The Last Airbender.[26] In February 2009, British actor Dev Patel replaced McCartney, whose tour dates conflicted with a boot camp scheduled for the cast to train in martial arts.[27] McCartney has expressed an interest in directing and producing films and even considered enrolling in a film school.[28]

McCartney appeared as a recurring character in the ABC Family series Greek for several episodes playing a star football talent who joins Kappa Tau. His character eventually decides to depledge the fraternity after citing pressures between football and Greek life combined with Rusty stealing his girlfriend Jordan.

McCartney confirmed in early February 2011 via Twitter, and on the website Perezhilton.com that he will have a major role on the new Fox pilot Locke and Key. In May 2011, Fox announced that it would not be picking up the series.

McCartney also starred in the horror film Chernobyl Diaries, released on May 25, 2012. He has been added to the Season 7 (2013) cast of the Lifetime Network series Army Wives, portraying a young soldier deployed to Afghanistan with an 18-year-old wife at home.

In the summer of 2014, McCartney had a guest-starring role in the ABC Family Series Young & Hungry. McCartney played "Cooper," a computer hacker with a romantic interest in the show's lead, played by Emily Osment.[29]

In 2016, McCartney appeared on Fear the Walking Dead, as "Reed", an aggressive member of a group of pirates.[30]

In 2005, McCartney participated in "Come Together Now", a charity single to benefit the victims of the 2004 Asian tsunami and the 2005 Hurricane Katrina.

Later in 2005, McCartney signed on as an official supporter of Little Kids Rock,[33] a nonprofit organization that provides free musical instruments and instruction to children in underserved public schools throughout the U.S.A. He sits on LKR's Honorary Board of Directors.

He has donated proceeds of his 2005 tour for disaster relief, recorded radio spots promoting the "Kids For A Drug-Free America" campaign, is a spokesperson for the St. Jude Children's Research Hospital, and is involved in the charity SPACE, which was co-founded by a childhood friend of his mother's. McCartney performed at the Hope Rocks concert in 2005 to benefit the City of Hope Cancer Center.[34] He appeared in the Concert for Hope October 25, 2009 with Miley Cyrus and Demi Lovato.[35]

Behind the Voice Actors Awards

Report a problem
Write to Jesse McCartney at FanPal • 2021