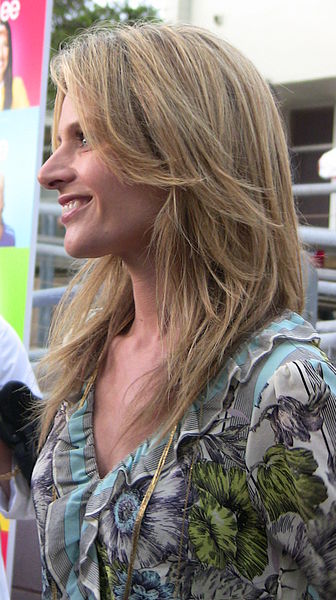 Jessalyn Sarah Gilsig (born November 30, 1971) is a Canadian-American actress known for her roles in television series, e.g. as Lauren Davis in Boston Public, Gina Russo in Nip/Tuck, Terri Schuester in Glee, and as Siggy Haraldson on the History Channel series Vikings.

She was born on November 30, 1971 in Montreal, Quebec, Canada, the daughter of Claire, a writer and translator, and Toby Gilsig, an engineer.[1] She began her acting in a voice work part at age 12 for a National Film Board of Canada production, Masquerade.[1]
Read more...

Gilsig attended McGill University in Montreal, from 1989 to 1993, graduating with a Bachelor of Arts degree in English in 1993.[2] She later pursued her acting studies further at Harvard University's Institute for Advanced Theater Training.[2]

Gilsig began her career as a voice actress.[1] She has done voices in the films such as Masquerade,[1] and for television series such as Young Robin Hood.[3]

She moved to New York City in 1995 where she appeared in several off-Broadway plays.[4] However, it was her association with David E. Kelley that led to her starring role in Boston Public.[5]

After guest-starring in two episodes of Kelley's The Practice, Gilsig was cast in two episodes of another Kelley program, the short-lived Snoops.[5] Although the series was cancelled before Gilsig's episodes were broadcast, Kelley wrote the part of Lauren Davis in Boston Public specifically for her, a series that premiered in September 2000 on FOX;[5] Gilsig would leave the series after the end of the second season in May 2002.[6]

Following her departure from Boston Public, Gilsig joined the cast of Nip/Tuck in 2003 as Gina Russo, a role she continued until 2008.[7] In 2004, she appeared in five episodes of NYPD Blue,[7] followed by four episodes of FOX's Prison Break in 2005.[8]

In addition to her extensive credits in television and theatre, Gilsig has appeared in film, beginning with a small role in the 1998 film The Horse Whisperer.[5] She then provided the speaking voice for Kayley in the animated film Quest for Camelot (1998), with Andrea Corr performing the character's songs.[5] In 2004 she appeared in Chicks with Sticks,[9] as well as See This Movie,[10] and in one of the lead roles in the 2007 movie, Flood.[11]

In 2007-2008 she had recurring roles in two television series, playing Shelley, the sister of Tami Taylor, on NBC's Friday Night Lights,[12] and Claire Bennet's biological mother, Meredith Gordon, on Heroes.[13] Gilsig went on to play the main role of Terri Schuester on the Fox show, Glee, from 2009-2012.[14]

In 2013, Gilsig was a series regular, portraying Siggy Haraldson, wife of Earl Haraldson and paramour of Ragnar Lothbrok's brother, Rollo, on the History Channel series Vikings until 2015.[15][16] In 2017 she will be joining the cast of Scandal.[17]

Gilsig met and briefly dated her future husband Bobby Salomon as a high school student - he was the football team quarterback she described as a "cool guy." Salomon, a film producer, moved to Hollywood in 2002, and the two began dating again.[18] They were married on January 1, 2005 in a traditional Jewish wedding (Gilsig being Jewish on her father's side).[18][19] Gilsig and Salomon have a daughter, Penelope, born on September 26, 2006.[20]

Gilsig filed for divorce from Salomon on September 8, 2010, citing irreconcilable differences, having been separated since 2009.[19][21] In 2013 Gilsig became an American citizen.[4]