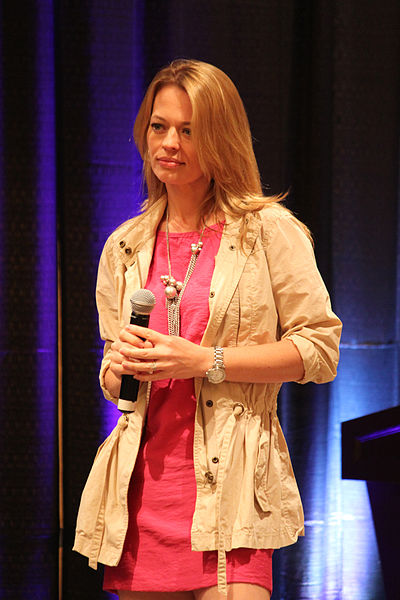 Jeri Lynn Ryan (born Jeri Lynn Zimmermann; February 22, 1968)[1][2] is an American actress best known for her role as the Borg Seven of Nine on Star Trek: Voyager, for which she was nominated four times for a Saturn Award and won in 2001.

Ryan was born in Munich, Germany, the daughter of Gerhard Florian "Jerry" Zimmermann, a master sergeant in the United States Army, and his wife Sharon, a social worker.[3] She has one older brother, Mark. As a "military brat", Ryan grew up on Army posts in Kansas, Maryland, Hawaii, Georgia and Texas.[4] When she was 11, her father retired from the Army and the family settled in Paducah, Kentucky. She graduated from Lone Oak High School in 1986 (as a National Merit Scholar),[5] and then attended Northwestern University, where she was a member of the Alpha Phi sorority.

In 1989 Ryan was chosen as Miss Illinois. She competed in the Miss America 1990 pageant, where she finished as 3rd runner-up, also winning a preliminary swimsuit competition.

She graduated from Northwestern in 1990 with a Bachelor of Arts degree in Theatre.

After college, she pursued acting full-time in Los Angeles. She made her acting debut in Who's the Boss?, and followed that with guest-starring roles in television series such as Melrose Place, Matlock, and The Sentinel, as well as such television films as Co-Ed Call Girl.

Her big break came when she won a regular role as the extraterrestrial investigator Juliet Stuart on the television series Dark Skies. The series was cancelled after one season, but the role had drawn the attention of the science-fiction community.

In 1997 Ryan was chosen for a role on the science fiction series Star Trek: Voyager as Seven of Nine, a Borg drone who had been "liberated", or freed, from the Borg's collective consciousness. When she joined the cast in season four, ratings increased 60%.[5] She appeared in Wes Craven's Dracula 2000.[6] After Voyager ended in 2001, Ryan joined the cast of Boston Public in the role of Veronica "Ronnie" Cooke, a frustrated lawyer who becomes a high school teacher. The series' producer, David E. Kelley, wrote the role specifically for her. The series ended in 2004.

Ryan appeared in the romantic comedy film Down with Love[7] and as Lydia in the independent film Men Cry Bullets.[8] Ryan's first film lead was in the indie comedy The Last Man, as the last woman left on Earth.[9]

In 2005 she had a role in a pilot called Commuters, a suburban version of Desperate Housewives.[10] She also had a recurring role as Charlotte Morgan on The O.C. in 2005;[11] and she guest-starred as Courtney Reece on David E. Kelley's Boston Legal in 2006. Ryan then co-starred in the CBS legal drama Shark as Los Angeles County District Attorney Jessica Devlin alongside series lead James Woods,[12][13] but she did not return for episodes aired after the 2007-2008 Writers Guild of America strike, although she was credited in all four episodes. The series did not air between January 27 and April 29, 2008. CBS cancelled the broadcast of the series after its season-two finale, May 20, 2008.[14]

She guest-starred as defense attorney Patrice La Rue on the April 7, 2009, episode of Law & Order: Special Victims Unit, her first role since giving birth to her daughter Gisele.[15] Ryan next won a seven-episode role on the TNT drama Leverage in season 2 as a grifter named Tara Cole, to fill in while series regular Gina Bellman (Sophie) was on maternity leave.[16]

She was in the Kevin Tancharoen-directed short film Mortal Kombat: Rebirth as Sonya Blade.[17] Although originally a film, it marketed as a web series, with previews scheduled to appear online in June 2010.[18] The web series, Mortal Kombat: Legacy, officially launched in March 2011.[19][20][21][22]

Ryan was a regular in the medical drama series Body of Proof, which premiered on March 29, 2011.[23]

Ryan has also continued to appear in guest roles on genre television series, including the science-fiction series Warehouse 13 as US Marine Major Amanda Lattimer, ex-wife of the series' male lead character Pete Lattimer, in the episode "Queen for a Day". Ryan made a return guest appearance on the TNT drama Leverage in season 4, episode 13 as the grifter Tara Cole, in the episode entitled "The Girls' Night Out Job", which aired December 11, 2011. She also appeared for a multi-episode arc in Season 1 of the sci-fi series Helix, which first aired in 2014.[24]

Ryan at the 2010 Las Vegas Star Trek convention in Nevada.

In 1990, while dealing blackjack at a charity event, the actress met investment banker and future Republican political candidate Jack Ryan. The couple married on June 15, 1991, and had a son, Alex, on August 15, 1994. Throughout the marriage, they took turns commuting between Los Angeles and Chicago for their careers, but divorced on August 27, 1999. Although Ryan mentioned in an interview for Star Trek that the frequent separations had been difficult for the marriage, the reasons for the divorce were kept sealed at their mutual request.[25] A few years after she joined the Voyager cast, Ryan began dating Star Trek: Voyager producer Brannon Braga.[26] Between February and November 2000, they were stalked by Marlon Estacio Pagtakhan, who was convicted for harassment and threats in May 2001.[27][28][29]

When Jack Ryan's campaign for an open United States Senate seat in Illinois began in 2003, the Chicago Tribune newspaper and WLS-TV, the local ABC affiliate, sought to have his records released. Both Jeri and Jack agreed to make their divorce, but not custody, records public, saying their release could be harmful to their son.[30]

On June 18, 2004, Los Angeles Superior Court Judge Robert Schnider agreed to release the custody files.[31] The decision generated much controversy, because it went against both parents' direct request and reversed the decision to seal the papers in the best interest of the child. It was revealed that six years earlier, Jeri had accused Jack Ryan of asking her to perform sexual acts with him in public,[32] and in sex clubs in New York, New Orleans, and Paris.[30][33] Jeri described one as "a bizarre club with cages, whips, and other apparatus hanging from the ceiling."[34] Jack denied these allegations. Although Jeri only made a brief statement,[35] and she refused to comment on the matter during the campaign, the document disclosure led Jack to withdraw his candidacy;[36][37] his main opponent, Barack Obama, then won the 2004 United States Senate election in Illinois.[38]

According to statements she has made in interviews, Ryan's main hobby is gourmet cooking. While starring in Boston Public, she moonlighted on weekends in the kitchen of the Los Angeles restaurant The House.[39] In 2003, Ryan met French chef Christophe Émé at a chef's charity event. The two eventually began a relationship, and Émé moved in with Ryan and her son Alex in their San Fernando Valley home.[40] In February 2005, Ryan, a "lifelong Francophile",[40] opened—in partnership with Émé—the restaurant Ortolan.[41] Located on Third Street in Los Angeles, California, the restaurant served French food with a modern interpretation. The two have appeared on Iron Chef America, where Émé and one sous-chef challenged Iron Chef Masaharu Morimoto and his two sous-chefs. The restaurant is seen in season 2, episode 26 of Boston Legal as Denny Crane (William Shatner) and Alan Shore (James Spader) are discussing the arrival of Courtney Reece (Jeri Ryan) at "her favorite restaurant". Despite its success, the restaurant closed in December 2010.[42]

Report a problem
Write to Jeri Ryan at FanPal • 2021