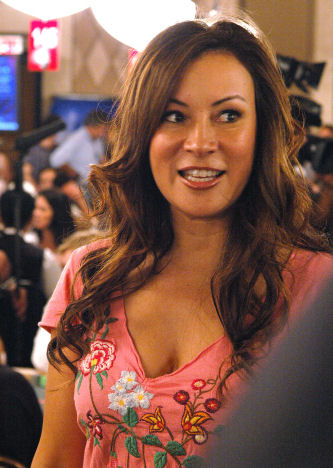 Jennifer Tilly (born Jennifer Ellen Chan; September 16, 1958)[3][4] is an American-Canadian actress, voice actress, and poker player. She is a World Series of Poker Ladies' Event bracelet winner. Her first notable acting role was on the sitcom Shaping Up (1984), which she followed with her film debut in No Small Affair the same year. She is known for her distinctive voice and comedic timing.[5][6][7] She is the older sister of actress Meg Tilly.

Tilly was the recipient of a Theatre World Award in 1993 for her performance in the Off-Broadway play One Shoe Off. Her other stage credits include the Broadway revivals of The Women (2001) and Don't Dress for Dinner (2012).

Tilly was born Jennifer Ellen Chan in Harbor City, Los Angeles. She is the first daughter of Harry Chan, a used car salesman, and Patricia (née Tilly), a Canadian schoolteacher and former stage actress.[11] Her father was of Chinese descent and her mother was of Irish, First Nations and Finnish ancestry.[12][13][14][15] She has an older brother, Steve, and two younger sisters, Meg and Rebecca.[16]

Following her parents' divorce when she was five, Tilly was raised by her mother and stepfather, John Ward, on rural Texada Island, British Columbia. Her mother divorced again when Tilly was 16, and moved to Victoria, where Tilly attended Belmont High School.[17][18]

Tilly holds a Bachelor of Arts degree in Theater from Stephens College in Missouri.[19]

In 1983, Tilly had small roles and had a recurring guest role on Hill Street Blues as Gina Srignoli, a mobster's widow who becomes romantically involved with detective Henry Goldblume. She played Frasier Crane's seductive-but-ditzy date Candi Pearson on an episode of the fourth season of Cheers and appeared as a similar character on the eleventh season of Frasier.

She appeared as Garry's girlfriend on It's Garry Shandling's Show, which aired on Showtime. She was also cast as a high-end prostitute on the short-lived comedy Key West, alongside Fisher Stevens. In 1989, she had a prominent role in the comedy Let It Ride, starring Richard Dreyfuss. Tilly's breakthrough film role was as a singing waitress in The Fabulous Baker Boys in a role that was written specially for her by Steve Kloves. She was nominated for an Academy Award for Best Supporting Actress for her role as a hopelessly bad actress in Woody Allen's Bullets over Broadway but she lost to her co-star Dianne Wiest. In 1994, she also had a small role in The Getaway with Alec Baldwin and Kim Basinger.

She gained additional popularity in recent years for her portrayal of serial killer Tiffany Valentine in several Child's Play films. The character was first introduced in the fourth installment of the franchise, Bride of Chucky (1998), and subsequently appeared in Seed of Chucky (2004), Curse of Chucky (2013), and the most recent film, Cult of Chucky (2017). In Seed of Chucky, she plays a dual role, providing the voice for Tiffany and also playing an exaggerated version of herself. The performance earned her nominations for the Fangoria Chainsaw Award for Best Actress and the MTV Movie Award for Best Scared-As-Shit Performance.[20]

In 2001, she starred as Crystal Allen in the Broadway revival of The Women. In 2002 she played Fanny Minafer in the made-for-TV remake of Orson Welles' The Magnificent Ambersons.

She is a semi-regular cast member on Family Guy, voicing the Griffin family's neighbor, Bonnie Swanson. She has also done voice-over work for the films Monsters, Inc., Stuart Little and Home on the Range, as well as the children's series Hey Arnold!. In Disney's The Haunted Mansion, she portrays Madame Leota (a head in a crystal ball). She has been active in the theatre, winning a Theater World Award for her performance in the off-Broadway play One Shoe Off.

She had a starring role on the sitcom Out of Practice, which starred Henry Winkler and Stockard Channing. The series was cancelled in May 2006. About this time, Tilly started dividing her time between her film career and professional poker. By the end of 2008, she returned to her film and television career. In 2009, Tilly made her Chinese film debut in the Christina Yao film Empire of Silver playing Mrs. Landdeck.

In 2012, she returned to Broadway in Don't Dress for Dinner, garnering an Audience Choice Award nomination for her portrayal of mistress Suzanne. In 2013, she starred in the Wallace Shawn/Andre Gregory collaboration Grasses of a Thousand Colors which premiered at the Royal Court Theatre in London in 2009 and then moved to the Joseph Papp Theater in 2013. She regularly appeared in the comedy revue Celebrity Autobiography.[21]

On June 27, 2005, Tilly won a World Series of Poker bracelet (and $158,625) in the Ladies' No-Limit Texas hold 'em event, beating 600 other players.[24] She followed up this accomplishment on September 1, 2005, by winning the third World Poker Tour Ladies Invitational Tournament held at the Bicycle Casino in Bell Gardens, a suburb of Los Angeles. Tilly has appeared in the GSN Poker Royale series.[25] Tilly played in the Celebrity Poker Showdown which aired June 14, 2006, on Bravo. She was knocked out in third place by Bravo's online poker champion Ida Siconolfi.

When playing poker on television, Tilly often wears low-cut tops with push-up bras that expose lots of cleavage to "look cute", but is quick to add that "if people are really playing poker, they don't care. Nothing looks better to them than a pair of aces. They're not looking at your pair. They're looking at their pair."[26] Tilly appears in the World Series of Poker Tournament of Champions 2007 Edition video game (along with boyfriend, Phil Laak) that was released in 2007 by Activision.[27]

In a television interview in 2005, Tilly stated that at that point in her career she was more interested in pursuing poker than acting.[28] By December 2008, Tilly announced her retirement from poker as a career. In her monthly column in Bluff Magazine, she said: "I love poker but greatness in poker is an elusive dream. There are too many variants. Trying to find validation in poker is like trying to find a virgin in a whorehouse. I'm not giving up poker entirely - gambling is an addiction after all. I'm just going to treat it more like a hobby and less like a career."[29]

Tilly was married to Sam Simon, developer and producer of The Simpsons, from 1984 until 1991.[33] She has been in a relationship with professional poker player Phil Laak since 2004.[2]