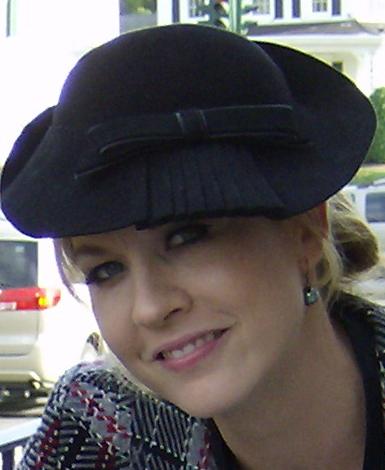 Jennifer Mary "Jenna" Elfman (née Butala; born September 30, 1971) is an American actress, best known for her performances in television comedies. Her first leading role was in the short-lived ABC sitcom Townies in 1996, before making her film debut in the 1997 comedy Grosse Pointe Blank.

Elfman is best known for her leading role as Dharma on the ABC sitcom Dharma & Greg (1997-2002), for which she won Golden Globe Award for Best Actress - Television Series Musical or Comedy in 1999, and was nominated for three Primetime Emmy Award for Outstanding Lead Actress in a Comedy Series. Later, she went to star in the comedy films Krippendorf's Tribe (1998), EDtv (1999), Keeping the Faith (2000), and Looney Tunes: Back in Action (2003).

Elfman made her return to series television with a leading role in the CBS sitcom Courting Alex in 2006, it was cancelled after one season. She went on to star in sitcoms Accidentally on Purpose (2009-10), 1600 Penn (2012-13), Growing Up Fisher (2014), and Imaginary Mary (2017), all were cancelled after single seasons. She had a recurring role in the FX legal drama Damages in 2012, and in 2018 is a series regular on the AMC horror drama Fear the Walking Dead.[1]

Elfman was born Jennifer Mary Butala in Los Angeles, California. She was the youngest of three children born to homemaker Sue (Grace) Butala and Richard Butala, a Hughes Aircraft executive.[2] Her father's younger brother is Tony Butala, lead singer since 1958 of the American vocal trio The Lettermen. She is of Croatian ancestry on her father's side[3] and was raised Roman Catholic.[4]

Elfman attended high school at the Los Angeles County High School for the Arts and then attended college at California State University, Northridge (CSUN).[5] She trained in ballet from age five, but later when the tendon came off her bone, she gave it up.[citation needed] She studied at the Westside School of Ballet, receiving a full scholarship.

Elfman posing during a break from filming The Six Wives of Henry Lefay in New Milford, Connecticut, October 15, 2007

Elfman began her professional career as a dancer, appearing in the music videos for Depeche Mode ("Halo" in 1990), Anthrax (1993's song "Black Lodge"), Chris Isaak (1995's "Somebody's Crying") and toured with the rock band ZZ Top on their 1994 tour as a "Legs Girl". After appearing in television commercials, Elfman was cast in the short-lived 1996 American sitcom entitled Townies on ABC. In 1997 Elfman was cast in Dharma & Greg on ABC, as Dharma Freedom Finkelstein Montgomery. The show ran for five seasons until its cancellation in 2002.

In 2012, Elfman and her husband Bodhi started their podcast, Kicking and Screaming by Jenna and Bodhi Elfman.[6]

In 2013, Elfman appeared in two NBC comedy series (1600 Penn, and Growing Up Fisher) which were cancelled after a single season.[7]

In 2016, Elfman was cast in the ABC comedy series Imaginary Mary. Like 1600 Penn and Growing Up Fisher, the series was cancelled after its first season.[8]

Elfman is a member of the Church of Scientology. Has been seen at the Scientology museum.[11][12]

In 2005, Elfman appeared at the Scientology-backed Citizens Commission on Human Rights' "Psychiatry: An Industry of Death"[13] museum grand opening and she and husband Bodhi are listed on the organization's website as members of the board of advisers from the arts, entertainment and media community.[14]

On May 24, 2006, she was the keynote speaker at the Human Rights Hero Award event in participation with the Scientology-affiliated groups Youth for Human Rights International and Artists for Human Rights (AFHR), an organization formed with the purpose of bringing artists together with the common cause of raising awareness of human rights around the world.

Elfman has participated in a number of fundraising activities, including: donating an hour of her time for auction;[16] donating a print of her lips;[17] participating in a telethon fundraiser;[18] hosting a comedy show;[19] and, asking for charity donations instead of birthday presents.[20]

Elfman has also participated in awareness-raising initiatives including: modelling for a fashion show;[21] reading to schoolchildren as part of the National Education Association Read Across America program; and, hosting a party at her house to raise awareness for a number of causes headed by the Environmental Working Group.

Elfman is on the Board of Directors of the Dizzy Feet Foundation.[22]