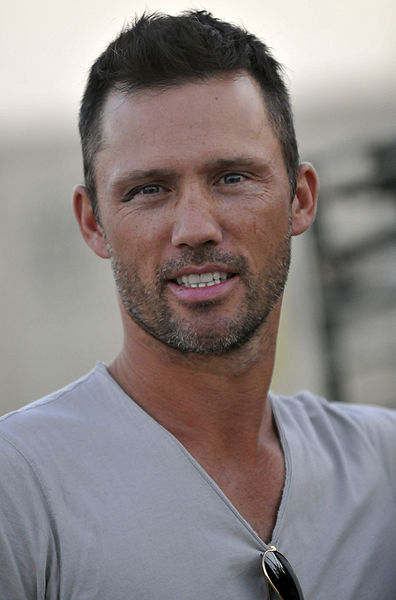 Jeffrey Gage Donovan (born May 11, 1968)[1] is an American actor. He played Michael Westen in the television series Burn Notice, and starred in films such as Hitch, Believe in Me, Changeling and Come Early Morning. He played Robert F. Kennedy in Clint Eastwood's J. Edgar (2011)[2] and his brother John F. Kennedy in Rob Reiner's LBJ. He had a recurring role in the second season of the TV series Fargo (2015).

Donovan was born in Amesbury, Massachusetts,[1] and raised along with two brothers, Michael and Sean, by their mother, Nancy Matthews.[3] Of his childhood, Donovan recalled:[4]

I grew up really poor. We grew up on welfare - a single mom with three boys. We didn't have anything. Christmas would come around, she'd rewrap gifts she'd given us before. We moved about 10 times in my childhood. When you come home from school and the lights don't go on, you think: we're moving! You can't pay electric bills on welfare. We became very frugal.

At Amesbury High School, Donovan was mentored by teacher Patricia Hoyt. She helped him start a drama club[5] and subsequently found him a private scholarship, enabling him to participate in a summer program that helped pave the way for his acting career.[6] He attended Bridgewater State College before transferring to the University of Massachusetts Amherst, where he graduated with a Bachelor of Arts in drama.

While attending university, Donovan was a commercial bus driver at UMass Transit Service, where he operated passenger buses as part of the PVTA.[citation needed] He went on to earn his Master of Fine Arts from New York University's Graduate Acting Program at the Tisch School of the Arts.

Donovan has guest-starred in several television shows, including CSI: Miami, Spin City, Monk, Millennium, Witchblade, The Pretender, Homicide: Life on the Street and Law & Order. In the short-lived TV series Threshold, Donovan played the antihero Dr. Sloan. Donovan also played the recurring role of William Ivers in Crossing Jordan. In 2004, he had his first leading role in the American remake of the British television series Touching Evil with Vera Farmiga on the USA Network.

From 2007 to 2013, Donovan starred in Burn Notice, as Michael Westen, a spy who was burned, seemingly by the CIA or Homeland Security, for reasons unknown to him, and marooned in Miami, Florida. The show follows Westen as he attempts to find out why he was burned and regain his job as a covert intelligence agent, in addition to bringing justice to the good people of Miami. Donovan made his directorial debut with the series' episode, "Made Man" which first aired on June 17, 2010. Donovan also directed a prequel film starring co-star Bruce Campbell, titled Burn Notice: The Fall of Sam Axe, which first aired on USA Network on April 17, 2011. The series lasted for seven seasons, received positive reviews from both fans and critics, and was nominated for four Primetime Emmy Awards.

In 2015, Donovan had a recurring role on Fargo as North Dakota mobster Dodd Gerhardt. In 2016, he began starring as Tarot-reading con artist Charlie Haverford in Shut Eye on Hulu. On January 30, 2018, Shut Eye was canceled after two seasons.[7]

Donovan has also performed on stage in various productions, including Hamlet as the eponymous title character, A View from the Bridge as Marco, An Inspector Calls, and Off-Broadway in Things You Shouldn't Say Past Midnight as Gene, The Glory of Living as Clint, regionally in Toys in the Attic as Julian Berniers, On the Waterfront as Terry, Oedipus as Teiresias and Freedomland as Seth. From October 2008 until spring 2009, Jeffrey starred in the comedy farce Don't Dress for Dinner in Chicago. Donovan has also performed in the radio dramas On the Waterfront (as Terry), Frozen, and Grapes of Wrath.

Donovan has over 20 years of martial arts experience. In college, he earned his black belt in Shotokan karate and competed throughout the state. Later, he studied aikido for over six years and Brazilian jiu-jitsu.[8]

In 2009, Donovan returned to Amesbury High School where he took part in a career day mentorship program with other successful professionals and presented the school with a $100,000 arts scholarship program.[13] The first $10,000 award was given out to a senior that June.[14]

For many years, Donovan has actively supported Life Rolls On (LRO), a foundation empowering people with spinal cord injuries. On October 4, 2009 he served as one of the chairmen for the 6th Annual LRO annual fundraiser called Night by the Ocean at the Kodak Theater.[15] Donovan was named Grand Marshal of the 22nd annual AIDS Walk Miami held on April 17, 2010.[16]

Donovan also supports his friends' charity events. In September 2009, while helping Michael Bolton at the 17th Annual Benefit Concert for Women and Children at Risk in Stamford, Connecticut, Donovan auctioned off a "Burn Notice walk-on-part" plus a kiss. Walk on parts usually raise $2,000-$5,000. With the added kiss, he raised $36,000.[17]

Report a problem
Write to Jeffrey Donovan at FanPal • 2022