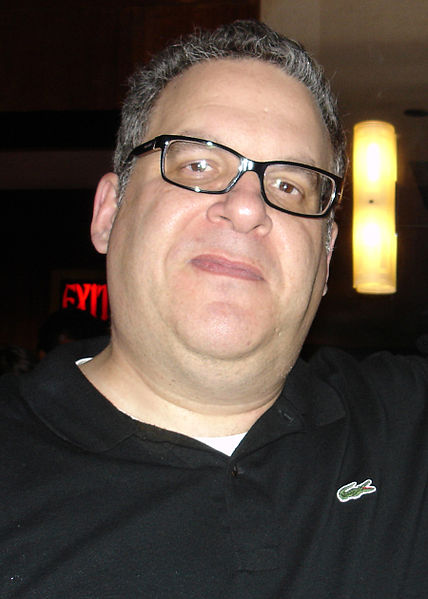 Jeffrey Todd Garlin (born June 5, 1962) is an American comedian, actor, producer, director, and writer. He is widely known for playing Jeff Greene on the HBO show Curb Your Enthusiasm, Mort Meyers on Arrested Development for Fox and Netflix and the patriarch of the titular family in the ABC sitcom The Goldbergs.

He has also appeared in ParaNorman, Wall-E, Toy Story 3 and Safety Not Guaranteed, among other films and has hosted his own podcast on Earwolf since 2013.

Garlin was born in Chicago, Illinois, to Gene[3] and Carole (née Crafton) Garlin. He grew up in Morton Grove, Illinois,[4] where his father had a family plumbing supply business called Bilko and his mother was active in community theater. He has a younger brother, Michael.[5] Garlin is Jewish[6] and attended Hebrew school.[7][8]

Garlin says he has wanted to be a comedian since the age of eight, when he saw Jimmy Durante perform in Chicago.[6] Garlin attended Melzer Elementary School in Morton Grove, Illinois.[9] He enjoyed playing sports at school, but had to stop, because he has Wolff-Parkinson-White syndrome, a heart ailment.[5]

When Garlin was in sixth grade, his father sold his supply business and the family relocated to South Florida.[9] He graduated from Nova High School, Davie, Florida in 1980. He attended Broward Community College, followed by a stint at the University of Miami studying film, but eventually dropped out. He began performing stand-up comedy there.[10]

In 1984, aged 22, Garlin moved back to Chicago to pursue a stand up comedy career. He performed with the comedy troupe The Second City.[11][12] He worked in the box office with Stephen Colbert.[13]

Garlin was hired by comedians Denis Leary (Lock-n-Load) and Jon Stewart (Unleavened) to help develop their specials. He worked as a stage director for their shows and edited the scripts. He worked with Larry David in this same way. He continues to do standup, where he says he improvises a lot on stage, and feels very relaxed, "maybe too relaxed."[5]

Garlin has a variety of television and film appearances to his credit, as an actor and a stand up, including Dr. Katz, Arrested Development, Everybody Loves Raymond, Late Show with David Letterman, Tom Goes to the Mayor, The Life and Times of Tim, The Daily Show, Late Night with Conan O'Brien, and Entourage.[18]

Garlin with the cast of The Goldbergs

From 1997-99, Garlin spent three seasons on NBC's Mad About You in the role of Marvin.[19] He co stars and executive produces the HBO series Curb Your Enthusiasm. In 2013, Garlin signed onto the ABC sitcom The Goldbergs.[20] He had a recurring role on the series Wizards of Waverly Place as Uncle Kelbo, appearing in three episodes over the first three seasons.

Nine years after making an uncredited début as Gut Gut in Spring Break (1983), Garlin earned his first film credit in 1992 in Dolly Parton's comedy Straight Talk.[21] He had a small role in RoboCop 3 as "Donut Jerk" after a member of the casting crew witnessed Garlin eating a doughnut while leaving Krispy Kreme with an additional two dozen doughnuts. He also had cameo appearances in Austin Powers: The Spy Who Shagged Me in 1999.

Other cameo appearances include Run Ronnie Run!, After the Sunset, Fat Albert, and Sleepover. He appeared in Steven Soderbergh's Full Frontal (2002) and with Eddie Murphy in Daddy Day Care (2003). In 2005, he had a small role in Fun with Dick and Jane.

In 2008, Garlin appeared in The Rocker as Stan, and also played Ed Lawson in Strange Wilderness. He lent his voice to the Disney/Pixar film Toy Story 3, as Buttercup. He appeared as Sid, alongside Jennifer Aniston and Gerard Butler, in the 2010 comedy action film The Bounty Hunter. He played Ed Burch in Laggies, released in 2014.

His feature directorial debut, I Want Someone to Eat Cheese With (which he also wrote), premiered to favourable reviews at the 2006 Tribeca Film Festival. It opened in September 2007. The film co starred Sarah Silverman and Bonnie Hunt.[22]

In 2006, Garlin directed This Filthy World, a one man show performed by director John Waters. He was a voice actor in WALL-E, an animated film by Pixar that was released June 27, 2008, as the Captain of the Axiom spaceship.[23] Garlin executive produced the documentary Finding Vivian Maier (2013).[24]

In 2013, Garlin directed his second film, Dealin' with Idiots,[25] which was inspired by his experiences with his two sons in Little League.[20][26] The entire movie was improvised.[24]

On the comedy podcast network Earwolf[37] Garlin hosted a show, called By The Way, In Conversation with Jeff Garlin,[38] which consisted of unscripted talks rather than formal interviews. The debut episode featured Garlin's Curb Your Enthusiasm co-star Larry David. The twice monthly instalments were recorded in front of a live audience at Largo at the Coronet in Los Angeles.[37] The last episode of the podcast was released in February 2015.[39]

In March 2018, Garlin was one of the actors who voiced the audiobook A Day in the Life of Marlon Bundo.[40]

Garlin is an avid fan of the Chicago Cubs. In this image, he is seen in Wrigleyville before Game Four of the 2016 World Series.

Having grown up around Chicago, Garlin is a fan of the Chicago Cubs.[42]

Garlin is a practitioner of transcendental meditation, which he does twice a day.[43] He says that it has helped him with the symptoms of ADHD.[44]

Garlin had surgery in Oklahoma City when he was in his late 20s to correct Wolff-Parkinson-White syndrome, a heart condition, which is an accessory electrical conduction pathway in the heart that results in tachycardia.[5] Garlin said he was an early recipient (#72) of the surgery, which millions of people have now had done.

In February 2000, before filming began on Curb Your Enthusiasm, he had a stroke, when he was 37 years old. During the early episodes of Season One, he had noticeably slurred speech, although his speech later improved. He also has type II diabetes, which he controls with diet and exercise.[5]

Garlin has written about his issues with food and has discussed his weight issues publicly.[43] In an interview in October 2011, Garlin said: "I think people look at fat people as having a lack of willpower when willpower has nothing to do with it. I didn’t change my life until I approached everything like an addict. I haven’t had sweets in almost three years because I know if I have one cookie, just like if an alcoholic has his first drink, I’m off to the races and I’m back eating sugar again."[44]

Report a problem
Write to Jeff Garlin at FanPal • 2021