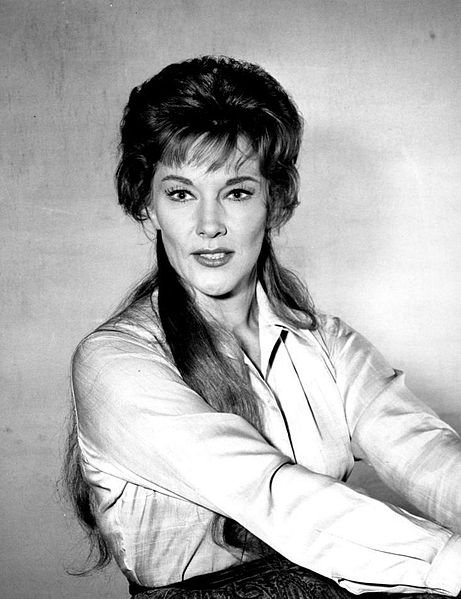 Wilma Jeanne Cooper (October 25, 1928 - May 8, 2013) was an American actress, best known for her role as Katherine Chancellor on the CBS soap opera The Young and the Restless (1973-2013). At the time of her death, she was eighth on the all-time list of longest-serving soap opera actors in the United States. She was the mother of three children, the eldest being actor Corbin Bernsen.[citation needed]

Cooper was born in Taft, California,[1] to Albert Troy Cooper, and his wife, the former Sildeth Evelyn Moore. She was the youngest of three siblings. The family lived in Kern County for several years, first in Taft until 1942 and then moving to Bakersfield. Her mother died August 21, 1944, and her father died April 11, 1986.[2]

Cooper began her career in the 1950s, appearing as a supporting player in films with stars like Maureen O'Hara, Glenn Ford, Tony Curtis, and Henry Fonda.[1] Her first film role was as Myra in the 1953 western film, The Redhead from Wyoming. She later appeared in small roles in The Man from the Alamo, Over-Exposed, 5 Steps to Danger, Rock All Night, House of Women, 13 West Street, The Intruder, Black Zoo, The Glory Guys, Tony Rome, The Boston Strangler and Kansas City Bomber.

Cooper was a fixture on episodic television throughout the 1950s and 1970s.[3] In 1956, she was cast as Mrs. Hinton in "The Rabbi Davis Story" of the religious anthology series, Crossroads. That same year, she portrayed Louise Douglas in "Girl Bandit" of Broderick Crawford's syndicated crime drama, Highway Patrol. She also appeared in the Wagon Train episode titled "The Whipping"and in the Cheyenne episode titled "Top Hand".

Cooper played Ann Dix in the 1955 episode "I Am Joaquin" of the syndicated western anthology series, Death Valley Days, hosted by Stanley Andrews. In the story line, Ann searches with ultimate success for eight years for the return of her young daughter whom the Mexican bandit Joaquin Murrieta (Cliff Fields) left at a Roman Catholic church after he boarded a ship and stabbed to death the girl's father, Capt. Stephen Dix, played by John Damler (1919-1984).[4]

In 1957, she starred in one of the early episodes of two different western series, NBC's Tales of Wells Fargo, in the role of the woman bandit Belle Starr, and on ABC’s Maverick; in 1959, she portrayed Duchess in a second Tales of Wells Fargo episode, "Clay Allison". In 1958, she was cast in the episode "Wheel of Fortune" of the NBC western series, Jefferson Drum, starring Jeff Richards as a newspaper publisher. Also in 1958, Cooper appeared as Lucy in "Sundown at Bitter Creek" of the CBS western anthology series, Dick Powell's Zane Grey Theater. In 1960, she again played Belle Starr in an episode of the TV series "Bronco" titled "Shadow of Jesse James".[citation needed]

In 1962, Cooper earned her first Emmy nomination for her performance in Ben Casey. After a turn as a regular on NBC's Bracken's World.[3] She was also cast in The Twilight Zone, Hawaii Five-O, Mannix, Ironside, Storefront Lawyers, The Silent Force, Touched by an Angel, Gunsmoke, The Untouchables, and many other series.

In 1965, Cooper appeared in the ABC network's western television series, The Big Valley, as Elaine Baxter Jason, a mercantile store owner and an old friend of series character Victoria Barkley (Barbara Stanwyck). In another episode she appears as the money-hungry aunt of Heath (Lee Majors) . Her husband was portrayed in the episode by John Anderson, who years later became known as MacGyver's grandfather, Harry Jackson.[citation needed]

The Young and the Restless

Cooper is best known for her role as Katherine Chancellor on the daytime soap opera The Young and the Restless. Her character has broken ground in the daytime medium; Katherine has endured several bouts with alcoholism, ischemic stroke, and the loss of many men in her life (four late husbands, and a child given away after birth).[3]

In 1984, Katherine (and Cooper) also had a facelift on national television (Cooper had pitched the idea of having a live facelift to CBS executives, who agreed to write the facelift into the show for Katherine Chancellor).[1][5][6] For many years, the story of Katherine's bitter rivalry with character Jill Foster Abbott has been a mainstay of the show (in real life, Cooper and Jill's portrayer, Jess Walton, were close friends). It was revealed in 2003 that Jill was Katherine's daughter born out of wedlock,[7] but developments in 2009 cast doubt upon that assertion and the long bitter enemies were found not to be mother and daughter after all.

Cooper's character, Katherine, was thought to have died in a November 2008 episode. It was, however, her look-alike, Marge, who died, and Katherine had experienced memory issues due to the car accident that took Marge's life.[citation needed]

Cooper had to take a medical leave in October 2011 and her part on the soap was temporarily recast with veteran actress Michael Learned. However, the next month, she confirmed she was returning to the set. She returned as part of the show on December 23, 2011.[citation needed]

She filmed her last scene on the show in March on the same day as the Young and the Restless 40th anniversary and this scene aired on May 3, 2013, five days before her death.[citation needed]

A tribute episode of The Young and the Restless in honor of Jeanne Cooper made up of clips, cast memories and interviews was shown on May 28 on the CBS network. Her character, Katherine, died offscreen a few months later after a long, worldwide trip.[citation needed]

Cooper married television producer Harry Bernsen, Jr., and they were together for 23 years before divorcing. In Jeanne Cooper's book (released on July 31, 2012), she makes it known that after their divorce, she and ex-husband Harry Bernsen very rarely saw each other (only when family functions dictated) and they were not close or even friends before his death on May 31, 2008. The Bernsens had three children, all of whom are actors: Corbin Bernsen of L.A. Law fame (born September 7, 1954), whose mother Cooper portrayed twice on that series; Collin Bernsen, born March 30, 1958; and Caren Bernsen,[7] born August 17, 1960.

In 2013, shortly after a round of promotion for the Y&R 40th anniversary, Cooper became ill due to an infection. Cooper died on May 8, 2013 in a Los Angeles hospital.[8][9][10] In addition to infection, Cooper had been a heavy smoker most of her adult life and suffered from Chronic obstructive pulmonary disease. Her final Y&R scene was filmed Tuesday, March 26, 2013 (the exact date of Y&R's 40th anniversary) and aired on Friday, May 3, 2013.[11] “Mom passed this morning”, her son, Corbin Bernsen, revealed on Twitter the day of her death. “She was in peace and without fear.”[12]

Report a problem
Biography of Jeanne Cooper at FanPal • 2020