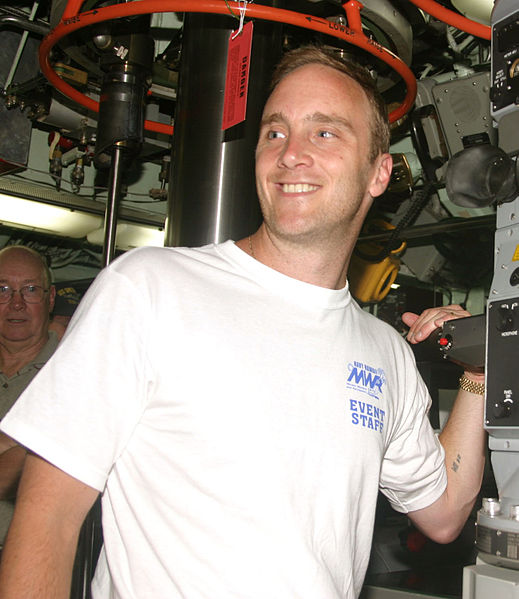 Mohr hosts his own podcast Mohr Stories on the SModcast Network and, since September 2015, hosted Jay Mohr Sports, a daily midday sports radio talk show on Fox Sports Radio. Mohr left Fox Sports Radio in January 2016 to pursue acting ventures. He was nominated for a Primetime Emmy Award as the inaugural host and executive producer of Last Comic Standing (2003-2006).

Mohr was born in Verona, New Jersey to Iva Jean (née Ferguson), a nurse, and Jon Wood Mohr, a marketing executive.[1][2] He has two sisters, Julia and Virginia. He has Scottish, German, English, and Welsh ancestry.[3][4] Mohr was raised Presbyterian, but later converted to Roman Catholicism.[5][6][7]
Read more...

Mohr appeared as a featured player for the 1993-94 and 1994-95 seasons of Saturday Night Live. His memoir, Gasping for Airtime: Two Years in the Trenches of Saturday Night Live (Hyperion Books, 2004), details this tumultuous period of his life, including his battle with chronic panic attacks.[8] He later credited his SNL co-star Sarah Silverman with saving his life by helping him treat the problem.

Mohr had a recurring role in the first season of The Jeff Foxworthy Show as Jeff Foxworthy's brother, Wayne. Mohr's first major film role was in 1996 when he played the conniving Bob Sugar, a sleazy sports agent in Jerry Maguire, followed in 1997 by a starring role in Picture Perfect. In 1999, Mohr starred in the television series Action, in which he played sleazy film producer Peter Dragon. He was the voice-over artist for Fox Sports Net's Beyond the Glory. Mohr appeared in additional movies including Suicide Kings, Are We There Yet?, Small Soldiers, Go, Pay It Forward, and The Groomsmen. Mohr was offered a late night talk show job by Michael Eisner, but he declined, instead convincing Eisner to let him host a talk show on ESPN, Mohr Sports, which ran briefly in 2001 before being cancelled. The talk show job Mohr passed was then offered to Jimmy Kimmel and became Jimmy Kimmel Live!.[9]

In 2003 and 2004, Mohr created, hosted, and was executive producer of NBC's Last Comic Standing reality television program. The show aired for three seasons, but was cancelled near the end of the third season due to poor ratings, only to be renewed later. Mohr was very vocal toward NBC concerning its cancellation[10] and did not return for the show's fourth season in 2006. Mohr was replaced with new host Anthony Clark, but was credited as a consultant. On the season finale of Last Comic Standing 4, Mohr performed as a guest comedian. His recurring role on the TV series Ghost Whisperer developed into a regular role. He appeared in "My Own Private Practice Guy", a 2003 episode of the sitcom Scrubs, and in three episodes of The West Wing in 2004 in the recurring role of Taylor Reid. Parts of Mohr's stand up was featured in Comedy Central's animated series Shorties Watchin' Shorties.

Mohr starred as newly divorced father Gary Brooks, the title character, for two seasons on the CBS sitcom Gary Unmarried. Paula Marshall played his ex-wife. In January 2010 he took the role as Billy in Clint Eastwood's thriller film Hereafter.[11] He also guest-starred on NBC's Outlaw in 2010.[12]

In June 2004, Mohr's first book, Gasping for Airtime: Two Years in the Trenches of Saturday Night Live, was published by Hyperion and chronicled his two years working on Saturday Night Live. In May 2010, publisher Simon & Schuster released Mohr's second book, No Wonder My Parents Drank: Tales from a Stand-Up Dad.

Mohr's album Happy. And A Lot was nominated for the Grammy Award for Best Comedy Album at the 58th Annual Grammy Awards.[18] The material was written by his wife Nikki Cox.[19]

In 2016, Mohr became the host of the Los Angeles Rams pregame show airing Saturday evenings after college football on KABC-TV.[20] He was replaced as the host in November 2016 with no explanation.[citation needed]

Mohr has a son, Jackson,[21] from his six-year marriage to former model Nicole Chamberlain.

Report a problem
Write to Jay Mohr at FanPal • 2020