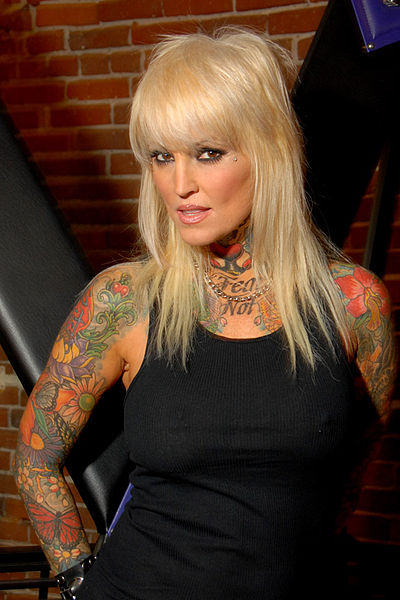 Janine Marie Lindemulder (born November 14, 1968), also known as Janine Marie James, is an American exotic dancer and adult film actress, best known for her work in American pornographic films (typically credited as just Janine) during the mid-1990s and since a 2004 comeback.[2] Lindemulder has appeared in several music videos for bands including blink-182 as well as appearing on the band's Enema of the State album cover.

Janine Lindemulder modeled for Penthouse magazine, making her first appearance in the December 1987 issue, as the Pet of the Month.[3] She appeared several more times in Penthouse over the next ten years, and was chosen as Pet of the Year Runner-Up for 1990.[4]

Lindemulder attempted to branch out into mainstream films early in her career. Her first role came in the 1988 Italian film titled Bersaglio sull'autostrada.[5] Known as Moving Target in English-speaking countries, she was credited as Janine Linde; the film also starred Linda Blair of The Exorcist fame. She went on to act in other lower-tier mainstream films, including Spring Break USA and Caged Fury. Both films achieved minimal success.[6] Her appearance in Penthouse led to a role in a video released by that company, titled Penthouse Satin & Lace, that featured various models from the magazine.[citation needed] This feature opened the door for her eventual debut in pornographic films.[7]

Lindemulder made her adult film debut in the 1992 feature Andrew Blake's Hidden Obsessions. She was featured in two more adult movies before joining Vivid Video as an exclusive "contract girl" (who are collectively referred to as the Vivid Girls).[8] Under the terms of her original Vivid contract, Lindemulder only performed sex scenes with other women. Her first Vivid release was titled Parlor Games, and she would go on to be featured in over fifty other titles for the company.

During her initial tenure with Vivid, Lindemulder continued to branch out into other forms of entertainment. She formed half of the exotic dancing duo Blondage, along with fellow adult film performer Julia Ann; the duo even headlined several videos for Vivid.[9]

In 1997, she received a part in the Howard Stern film Private Parts, as the wife of a camp director. She also appeared on Stern's television and radio shows as a featured guest. Lindemulder was the cover model for blink-182's album Enema of the State, and appeared in their video for the song "What's My Age Again?" as a nurse. She also appeared in several other music videos.[citation needed]

In 1999, Lindemulder announced that she was leaving the adult film industry to pursue a career as a kindergarten teacher.[10] She added that another reason she was retiring was to focus more on raising her child.[10] Her retirement lasted until April 2004, when she announced that she would be making a comeback - now, performing with men and women.[2] She signed with her former company, Vivid Video, and starred in eight new films. Her first film scene with a male was with Nick Manning in Maneater.[11] After her comeback deal with Vivid expired, Lindemulder signed with Vivid rival Digital Playground and starred in a handful of features for them, including Pirates in 2005.[12]

Lindemulder is a relative of adult entertainer and figure model Kelly Madison.[15] She is of Dutch, French, German and Native American descent.[16]

Janine Lindemulder married to Grant S. Motshagen in 1988 but ended their marriage relationship in 1996. They had a son together named, Grant Tyler Motshagen was born on July 12, 1991.[19]

Lindemulder married West Coast Choppers founder Jesse James on October 20, 2002. Their marriage was documented in the Discovery Channel special Motorcycle Mania 3. The presentation showed a wide range of their relationship: from the marriage ceremony, to Lindemulder throwing a vase at James and being arrested for domestic abuse.[20] Lindemulder and James, who had one daughter together, Sunny James, on January 1, 2004, and divorced in 2004.[21][22]

In July 2011, James was awarded full custody of Sunny. Two days later, Lindemulder was arrested at her Texas home on harassment charges for calling James more than 25 times in the span of a few days. She had previously been arrested on similar charges of sending threatening emails and voicemails to James.[28]

Lindemulder was arrested in May 2003 for assaulting husband Jesse James. James filed for a temporary restraining order and legal separation from Janine Lindemulder in May 2003, after she attacked him in their Seal Beach, California house. Janine became angry when she arrived back at the house and discovered Jesse loading her possessions into a truck. According to court documents, James said, "She began screaming and yelling at me...and punching me. She punched me in the face several times." Jesse was unable to defend himself because his right arm had recently undergone surgery.[29] According to court documents,[citation needed] by the time the police arrived, Lindemulder had already hit James in the back of the head with a flowerpot, and attacked him with a metal sculpture. James also claimed that Lindemulder punched him in the eye on February 13, 2003 - and attempted to run him over with a vehicle in May of that year.

In December 2008, Lindemulder began serving a six-month federal prison sentence. The judge also ordered that she live in a residential community corrections center for up to six months after her release from prison, that she complete one year of supervised release, and that she repay the federal government $294,000 in back taxes.[32] Lindemulder was incarcerated at the Federal Correctional Complex, Victorville, in Adelanto, California. She was released, after serving four months, on July 13, 2009.[35][36] She was planning to blog from prison by writing letters to her webmaster and complete her GED.[36] She stated in a December 8, 2009 phone interview on the Howard Stern Show that she had not engaged in sex while in prison, as she "didn't want to risk ."[37]