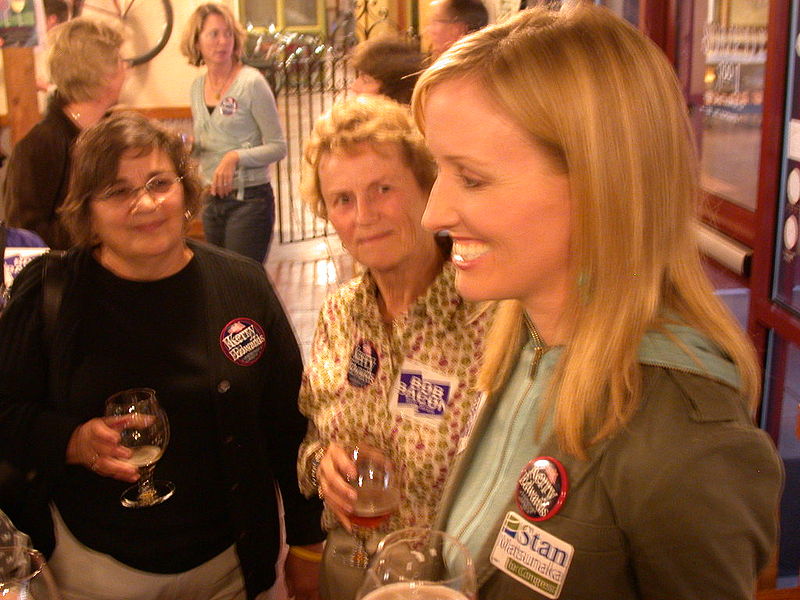 Janel Wallace Moloney (born October 3, 1969) is an American actress. She is best known for her role as Donna Moss on the television series The West Wing, a role for which she received nominations for Primetime Emmy Award for Outstanding Supporting Actress in a Drama Series in 2002 and 2004. From 2014 to 2017, she starred on the acclaimed HBO drama, The Leftovers.

Born in Woodland Hills, California, Moloney is the niece of actress Christine Ebersole, and attended the acting conservatory at SUNY Purchase. During the 2004 U.S. Presidential campaign, she was an active supporter of John Kerry's presidential campaign and made public appearances on its behalf. Moloney has two children with composer Marcelo Zarvos.[1]
Read more...

Her early work included television guest roles on ER, Sports Night, The Adventures of Brisco County, Jr., and Murder, She Wrote.[2] Starting in 1999, Moloney had a recurring role on The West Wing as Donna Moss, assistant and eventual love interest to Deputy White House Chief of Staff Josh Lyman (Bradley Whitford).[3][4] Moloney was originally credited only as a guest star, but she appeared in every episode of the first season. From the second season onward, Moloney was listed in the main credits. Moloney has received two Emmy Award nominations, one in 2002 and one in 2004, for Outstanding Supporting Actress in a Drama.[5][6]

Moloney appeared in the television film Bang Bang You're Dead with Thomas Cavanagh and Randy Harrison, which was first broadcast on October 13, 2002 on Showtime.[7] She played the part of Amber Frey in the made-for-TV movie Amber Frey: Witness for the Prosecution, broadcast May 25, 2005 on CBS.[8] In 2007, Moloney played Dana Chase, who has a relationship with Tommy Caffee (Jason Clarke) in six episodes of the 2nd season of Brotherhood.[9]

In 2007, Moloney made her Off-Broadway stage debut as Theresa in the Playwrights Horizons production 100 Saints You Should Know, written by Kate Fodor and directed by Ethan McSweeny.[14] She appeared in the Off-Broadway play Love, Loss, and What I Wore in September through October 2, 2011.[15]

Moloney starred in the 2010 feature film Armless, as Anna.[16] She made a brief appearance as Earlene in the 1995 Walter Hill directed western Wild Bill, and appears in the 2013 film Concussion.