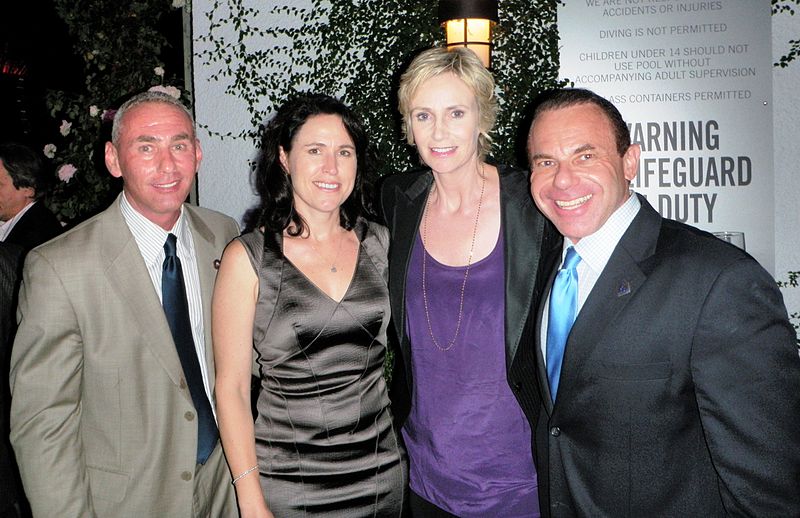 Jane Marie Lynch (born July 14, 1960)[1] is an American actress, author, singer, and comedian. She is best known for her role as Sue Sylvester in the musical television series Glee. She also gained fame in Christopher Guest's improv mockumentary pictures such as Best in Show.[2][3][4]

Lynch's television cameos include an appearance in the Nickelodeon situation comedy iCarly and the Showtime dark comedy series Weeds. Lynch had a recurring role in the Warner Bros. situation comedy Two and a Half Men from 2004 to 2014 and was nominated for a Primetime Emmy Award for her performance in 2010. She has also had other notable roles in numerous mainstream comedies, such as Talladega Nights: The Ballad of Ricky Bobby, The 40-Year-Old Virgin, Role Models and The Three Stooges.

On September 4, 2013, Lynch received the 2,505th star on the Hollywood Walk of Fame in the category of television located at 6640 Hollywood Blvd. Lynch has lent her voice to multiple animated films, including Space Chimps, Ice Age: Dawn of the Dinosaurs, Shrek Forever After and Wreck-It Ralph. Since 2013, she has hosted the NBC game show Hollywood Game Night, for which she has won two Emmy Awards. She has also hosted Earth Live for National Geographic.

Lynch was born in Evergreen Park, Illinois,[5] and raised in Dolton, Illinois, the daughter of a banker father, Frank Lynch, and a homemaker-secretary mother, Eileen (née Carney).[6][7][8] Her father was of Irish descent, his parents having come from Swinford County Mayo,[9][10] and her mother was of Irish and Swedish ancestry.[11] She was raised in a Catholic family[12] and attended Thornridge High School.[6] She received her Bachelor's degree in theater from Illinois State University and her MFA in theater from Cornell University.
Read more...

Lynch spent 15 years in Chicago, acting in the Steppenwolf Theatre Company and, at the time of her audition, was one of only two women picked to join The Second City comedy troupe.[6][13] She then continued to hone her comical and improvisational skills at Annoyance Theater, playing Carol Brady in the theater's The Real Live Brady Bunch. Andy Richter played Mike Brady in the New York shows. He and Lynch became very good friends.[14]

Lynch got her start in films in 1988, playing a small role in the film Vice Versa. In 1993, she had a secondary role as a doctor alongside Harrison Ford in The Fugitive.[15]

Audiences and critics took notice of Lynch for her turn in Judd Apatow's The 40-Year-Old Virgin. She told Fresh Air's Terry Gross that the role was originally intended for a man but also that, at the urging of Steve Carell's wife Nancy Walls, was offered to Lynch instead.[16] From there, she took supporting roles in a series of films including Role Models, Talladega Nights: The Ballad of Ricky Bobby, Alvin & the Chipmunks, Walk Hard: The Dewey Cox Story, Space Chimps, The Rocker, The Hammer, Another Cinderella Story, Ice Age: Dawn of the Dinosaurs, Wreck-It Ralph, and Spring Breakdown.[17]

In Adventures of Power, a critically acclaimed comedy about air-drumming released in 2008, Lynch reunited with Michael McKean, her former co-star from For Your Consideration, in the role of Aunt Joanie and starring alongside Ari Gold, Adrian Grenier, Chiu Chi Ling, and Shoshannah Stern. In a role similar to that of her contributions as Sue Sylvester on the Fox musical comedy-drama series Glee, Lynch's role as the encouraging Aunt Joanie to Power, a young musician who plays the air drums because he never had access to musical instruments, promotes the initiative to support music education.[18]

In Julie and Julia, she portrayed Dorothy McWilliams, Julia Child's sister. Entertainment Weekly dedicated an article on its website to the possibility of her performance receiving an Academy Award nomination.[19][20] However, she was not nominated.

In 2008 she narrated Out & Proud in Chicago, a documentary which tells about LGBT life in Chicago from the Civil War to 2008 through the stories of 20 everyday Chicagoans, from age 30 to age 80.[21]

Jane Lynch at the 69th Annual Peabody Awards for Glee

Beginning in 2009, Lynch appeared as a regular cast member of the Fox series Glee. The role echoed previous guest appearances in The X-Files and Veronica Mars, being her third time cast as a harsh high school teacher. She won glowing reviews for her role as the aggressive cheerleading coach, Sue Sylvester. Mary McNamara of the Los Angeles Times wrote, "Lynch alone makes Glee worth watching."[22] Before her work with Glee, she was a series regular on the Starz comedy Party Down. Though the series was renewed for a second season, Lynch would not be returning, due to her work on Glee.[23]

Even in Glee's early days, Lynch continued to pursue other projects. Lynch hosted Saturday Night Live on October 9, 2010; the news of her hosting was accidentally broken to her by her Glee boss, Ryan Murphy, by text message.[24] Lynch had also guest-starred on the Nickelodeon comedy iCarly as Pam Puckett, Sam Puckett's mother, in the episode "iSam's Mom."

Beginning on July 11, 2013, Lynch hosted the NBC game show Hollywood Game Night. The show had two teams made up of members of the public (civilians) and celebrities competing in various party games, with a chance for the civilians to take home up to $25,000.[25]

Lynch was the co-host of the NBC special New Year's Eve with Carson Daly on December 31, 2013, alongside Carson Daly, host of The Voice.

In February 21, 2017, Lynch appeared on The Price Is Right as a Celebrity Charity Week contestant.

In March 2013, Lynch was announced as executive producer of comedy web series Dropping the Soap.[26] Lynch starred in the series and was nominated for the Primetime Emmy Award for Outstanding Actress in a Short Form Comedy or Drama Series.[27] The series premiered on Dekkoo.com and was made available on digital platforms including Amazon Video.[28]

Lynch wrote and starred in the award-winning play Oh Sister, My Sister. Originally produced in 1998, the play kicked off the Lesbians in Theater program at the Los Angeles Gay and Lesbian Center in 2004.[30]

She starred in Comcast's XFinity ads, mainly with two different laptops and two different colored Persian cats. She also stars in LG Corp.'s Text Ed campaign to educate drivers about the dangers of texting while driving.[31]

Lynch's first experience hosting an awards show was in 2010 when she hosted the 2010 VH1 DoSomething Awards.[32] It was announced that she will be hosting the 2011 VH1 DoSomething Awards, airing on VH1 on August 18.[33] Lynch hosted the 63rd Primetime Emmy Awards on September 18, 2011, only the third woman in Emmy history to host the awards show solo.[34] According to the September 19 edition of The Hollywood Reporter, Lynch hosting the Emmys did not help ratings, as viewing was down 8% year over year and eight million fewer people watched the Emmys than watched Michael Vick's return to Atlanta on Sunday Night Football on NBC (21.5 million for Eagles-Falcons, 13.5 million for the Emmys).[35]

An autobiography written by Lynch, titled Happy Accidents, was published in the fall of 2011 by Hyperion Voice. Lynch was inspired to write the book after reflecting upon the successes of her past year and wishing she could have told her more anxious, younger self to not worry as much.[36] The memoir also includes detail about her years as an alcoholic and her success in battling this addiction.[37] Lynch is openly lesbian and married Lara Embry in 2010.[38] A self-proclaimed animal lover, Lynch has two dogs and a cat.[39] She has recorded a PSA for PETA encouraging the adoption of shelter animals, and she sponsors an annual adoption event at the Rose Bowl in Pasadena.[40][41] She was the commencement speaker for Smith College's class of 2012 where she received an honorary Doctorate in Fine Arts.

In March 2012, Lynch was featured with Martin Sheen, Jamie Lee Curtis, Chris Colfer and Brad Pitt in a performance of Dustin Lance Black's play, '8' - a staged re-enactment of the federal trial that overturned California's Prop 8 ban on same-sex marriage - as Maggie Gallagher.[42] The production was held at the Wilshire Ebell Theatre and broadcast on YouTube to raise money for the American Foundation for Equal Rights.[43][44]

Lynch made her Broadway debut as Miss Hannigan in Annie for a limited engagement lasting from May 15 to July 14, 2013. She took the place of Katie Finneran.[45]

In 2014, Lynch joined the Ban Bossy campaign as a spokesperson advocating leadership roles for girls.[46]

In 2015, Lynch debuted See Jane Sing, a cabaret show in which she sings along with Kate Flannery from The Office and Tim Davis from ABC's Boy Band, accompanied by the Tony Guerrero Quintet. The show continues to tour around the country. In 2016, Lynch released A Swingin' Little Christmas, a nostalgic Christmas album featuring the See Jane Sing ensemble and released on Lynch's own KitschTone Records label. The album received substantial airplay around the country and landed on the Billboard AC Chart's Top 10. In 2017, Lynch recorded a Christmas single with actor Dick Van Dyke. The song was composed and produced by Tony Guerrero and was released by KitschTone Records.

Lynch is openly lesbian; in 2005, she was named one of Power Up's "10 Amazing Gay Women in Showbiz." Lynch married clinical psychologist Lara Embry on May 31, 2010, in Sunderland, Massachusetts, whom she first met a year earlier at a fundraiser in San Francisco.[47][48][49] In June 2013, Lynch announced that she and Embry were divorcing after three years of marriage.[50] The divorce was finalized in January 2014.[51]

Lynch is deaf in her right ear. On July 19, 2013, she speculated to Craig Ferguson on The Late Late Show that the deafness in that ear was most likely caused by having had a high fever as an infant.[52]