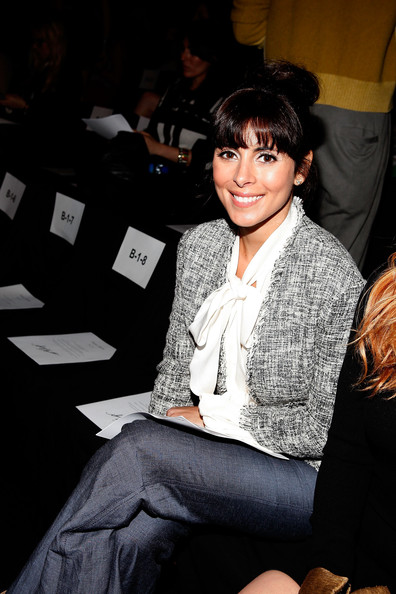 Jamie-Lynn Sigler (born May 15, 1981)[1] is an American actress and singer. She is best known for her role as Meadow Soprano on the HBO series The Sopranos.

Sigler was born in Jericho, New York,[1] the daughter of Steve and Connie Sigler. She has a brother, Brian, and Adam, who died in November 2014.[1] Her father was the founder of the Men's Senior Baseball League and is Sephardic Jewish (of Greek-Jewish and Romanian-Jewish descent). Her Cuban mother was raised Catholic and converted to Judaism upon marrying Sigler's father.[2] Sigler began acting and singing at the age of seven. She went to Hebrew school and had a bat mitzvah.[3] She attended Jericho High School.[4] She also studied at the Cultural Arts Playhouse which, at the time, was located in Old Bethpage.[4]
Read more...

In 1997, she was cast as Meadow Soprano, daughter of New Jersey mob boss Tony Soprano.[5] The show premiered in 1999 and became a huge success, catapulting Sigler to fame as a TV actress. She continued to play the role through the series finale in 2007.[6][7]

In 2000, while filming Campfire Stories in Hamburg, New Jersey, Sigler was paralyzed from the waist down for several days by Lyme disease.[8] Sigler played the title role in Cinderella on tour and at The Theatre at Madison Square Garden in 2001.[9] She then spent five months on Broadway from October 2002 through February 2003 playing Belle in Beauty and the Beast. She has continued to appear in theatrical roles.

In 2004, she starred as "Hollywood Madam" Heidi Fleiss in the USA television movie Call Me: The Rise and Fall of Heidi Fleiss. In that same year, she had her first starring feature film role, Extreme Dating, an independent film. In 2005, Sigler starred in Love Wrecked and the following year in Homie Spumoni, when she played the role of Alli, the girlfriend of Renato/Leroy (Donald Faison) directed by Mike Cerron.[10]

In 2008, she appeared as herself in 13 episodes of the fifth and sixth season of the HBO series Entourage. In the fifth season, she appeared in the episodes "First Class Jerk", "Playing With Fire" and "Return to Queens Blvd", as the love interest of the character Sal 'Turtle' Assante, portrayed by Jerry Ferrara. She returned as a recurring guest star for season six of the series, after becoming Ferrara's real-life girlfriend.[11] On November 17, 2008, Sigler guest-starred as Jillian on the TV series How I Met Your Mother in the episode "Woooo!"[12] On the December 6, 2008 airing of Saturday Night Live, she appeared as the checkout girl for the Digital Short music video "Jizz in My Pants" by The Lonely Island.[13]

In 2009, she starred in the psychological thriller film Beneath the Dark, which originally had a working title of Wake.[14] The same year, she appeared on ABC's Ugly Betty in a five-episode arc.[15] Beginning in 2012, she appeared as a main character in the short-lived series, Guys with Kids.

In 2001, she released a pop album called Here to Heaven, which featured the single "Cry Baby". The album was a commercial failure. In 2007, Sigler said she was "embarrassed" by the album and regretted releasing it.[16] In 2012, she collaborated with Romeo Santos on the single "You" and appeared in its music video.[17]

She appeared in FHM and was featured in The Girls of FHM 2004.

In 2008, Sigler visited Israel through the Birthright Israel program and was moved by the trip, calling Israel "one of the most beautiful, inspiring places I've ever been to". She said that the trip gave her a greater understanding to preserve her Jewish identity.[21] Also in 2008, Sigler began a relationship with actor Jerry Ferrara, whom she met while guest-starring on Entourage as a love interest of Ferrara's character, Turtle.[22] They split up in 2009.[23] She then dated football player Mark Sanchez.[24]

In January 2016, Sigler revealed that she was diagnosed with multiple sclerosis when she was 20 years old.[32]