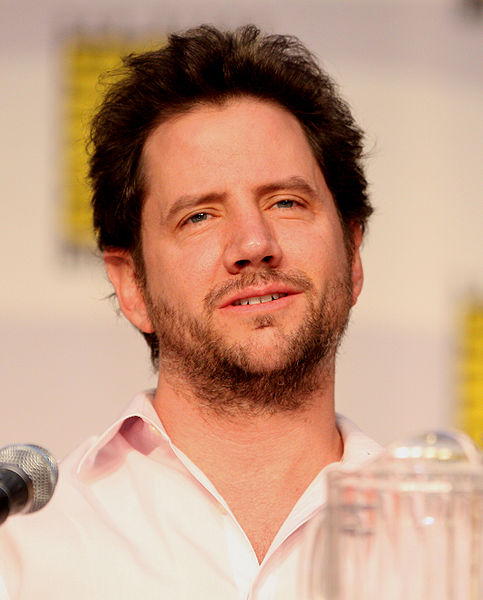 James Harvey Kennedy (born May 25, 1970) is an American stand-up comedian, television producer, screenwriter, and actor, He is best known for playing Randy Meeks in the Scream franchise and playing various characters in The Jamie Kennedy Experiment on The WB.

Kennedy was born in Upper Darby Township, a suburb of Philadelphia, Pennsylvania. Kennedy was raised Roman Catholic.[1][2][3] He attended and graduated from Monsignor Bonner High School in 1988. After high school, Kennedy began his career as a Hollywood extra. Meanwhile, he worked on voice impersonations.
Read more...

When Kennedy first arrived in Los Angeles, he became a professional Hollywood extra. During his first night in L.A., he was reading a Joan Rivers autobiography in a diner when the waiter explained to him that he had been in a dozen movies as an extra. Kennedy asked, "If you've been in so many movies, why are you a waiter?" The waiter responded, "I have to keep my day job."[citation needed]

After a few years of struggling, Kennedy was unable to find an agent and worked as a host at Red Lobster. He auditioned for over 80 commercials and could not book one. He then took a job as a telemarketer, and learned that he had a talent in selling things. Kennedy then thought that if he could sell anything, "why not sell myself?", becoming his own agent.[citation needed]

Kennedy created a false persona, screen agent "Marty Power", to attract the attention of real agents and managers over the phone, who would later book his performances. He came to prominence in the late 1990s for playing Randy Meeks in the Scream film series.[4] His lead role as Tim Avery in Son of the Mask earned him a Golden Raspberry Award nomination for Worst Actor.[5]

Kennedy formed a production company called Wannabe Producers, alongside Josh Etting,[citation needed] through which he has produced the shows The Jamie Kennedy Experiment, Blowin' Up, The Starlet, and Living with Fran created by David Garrett. Following Malibu's Most Wanted, in which he both wrote and starred, Kennedy co-wrote the MTV show Blowin' Up (2006) featuring his friend Stu Stone.

Kennedy lent his voice to the videogame ESPN NFL 2K5 as a celebrity adversary with his own football team, the Upper Darby Cheesesteaks. He is also unlockable as a free agent tight end in season mode. His stint as Activision's emcee at E3 2007, however, drew much criticism not only for his ignorance of the industry, but also for performing drunk as he insulted the audience.[6]

While working on his film Malibu's Most Wanted, Kennedy wrote an autobiography entitled, Wannabe: A Hollywood Experiment. The book chronicles his life in Hollywood as he attempts to become a star. It gives background on his life and family, and quickly dives into his adventures. It tells of such things as Kennedy's living conditions in the Hollywood slums, his dilapidated car, and his kidney issues.[citation needed]

A performer of stand-up comedy, he is also known for his sketch performances on his television reality show, The Jamie Kennedy Experiment, which became the WB Network's highest-ranking new show in 2002, but which was cancelled in April 2004 due to falling viewership.[7] In 2006, Jizzy Entertainment released Unwashed: The Stand-Up Special. In 2008, Kennedy released the documentary Heckler, about the plight of stand-up comics versus their often-aggressive audiences.[8] In 2007, he appeared in Criminal Minds as a cannibal satanist serial killer.

From 2008-2010, Kennedy played psychology professor Eli James in the CBS drama Ghost Whisperer. From 2009-2013, he was in the TV series, The Cleveland Show, playing Roberta Tubbs' boyfriend.[9]

He also stars in the Nicktoon Fanboy & Chum Chum as Kyle, an insecure boy wizard who loathes the fun-loving Fanboy and Chum Chum, but who secretly yearns for their friendship. In April 2010, sources reported that Kennedy would very likely return to the Scream franchise to star in the fourth installment;[10] however, according to Scream screenwriter Kevin Williamson, plans were never made for him to rejoin the franchise, attributing the misinformation to a fabrication by Kennedy.[11]

On December 31, 2012 Kennedy hosted and produced First Night 2013 with Jamie Kennedy, a New Year's Eve television special widely considered one of the worst shows of all time. His film Lost & Found in Armenia, in which he plays an American tourist who ends up in an Armenian village, accused of being a Turkish spy, later opened to select theatres on June 7, 2013. His latest film, Buddy Hutchins, in which Kennedy plays a down-on-his-luck recovering alcoholic, is set for a 2015 VOD release.[12] In 2015, he portrayed Frump in the Colton Tran adventure mystery film Gloom and Beach Patrol Alex in Allegra Pictures' horror film The Sand.[13] In 2015, he also starred as Travis Welker in Tremors 5[14] and as Rob in Rivers 9.[15]