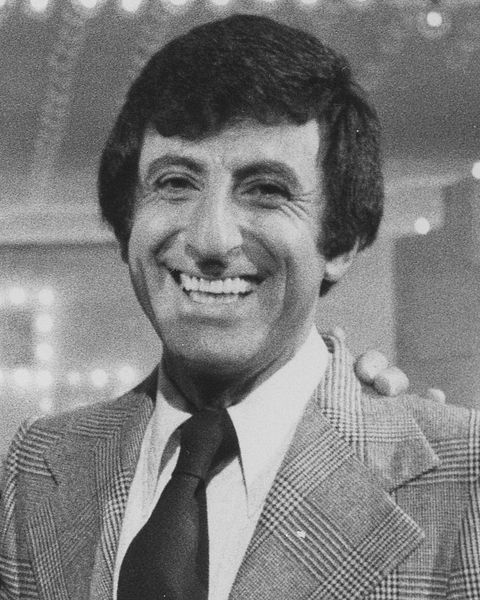 Jamie Farr (born Jameel Joseph Farah; July 1, 1934)[1] is an American television, film, comedian and theatre actor. He is of Lebanese descent. He is known for playing a cross-dressing corporal (later sergeant) from Toledo, Ohio, bucking for a Section 8 discharge, in the role of Maxwell Q. Klinger in the CBS television sitcom M*A*S*H. As of December 31, 2016, following the death of William Christopher, Farr is currently the oldest surviving cast member of M*A*S*H.

Farr was born in Toledo, Ohio, to Lebanese-American parents Jamelia M. (née Abodeely), a seamstress, and Samuel N. Farah, a grocer.[2][3] He and his family attended Saint George Antiochian Orthodox Church in Toledo.[4]

Farr's first acting success occurred at age 11, when he won two dollars in a local acting contest. After Woodward High School, where he was one of the standouts among his class, Farr attended the Pasadena Playhouse, where a Metro-Goldwyn-Mayer talent scout discovered him, offering him a screen test for Blackboard Jungle. He won the role of the mentally challenged student, Santini. With the encouragement of his Toledo mentor, Danny Thomas, he decided to become an actor.[5]

Farr’s first film roles were in 1955 in Blackboard Jungle (credited as Jameel Farah) and as a fruit vendor in Kismet (uncredited). After this, he was drafted by the United States Selective Service into the United States Army, undergoing his basic training with the 6th Infantry Division, Fort Ord, California, he served for two years, with service in Japan and Korea, making him one of the only two members of the M*A*S*H cast to have served in the United States Armed Forces in Korea (Alan Alda).

Although Farr was off to a promising start, roles were infrequent for the young actor, and he was cast as a delivery person, a post office clerk, an army store clerk, an airlines reservations agent, and as an employee at a chinchilla ranch, all small roles or bit parts. In 1958, Warner Brothers cast him as the co-pilot of a TB-25 in the Andy Griffith military comedy No Time for Sergeants, which also brought the young TV comic Don Knotts to motion pictures. Farr appeared as Thaddaeus in the 1965 film The Greatest Story Ever Told, along with minor roles in Who’s Minding the Mint? and With Six You Get Eggroll.

Farr got a new acting role on television when, in the late 1950s, he became a regular on The Red Skelton Show before becoming a second banana with Harvey Korman on The Danny Kaye Show. Farr also appeared on The Dick Van Dyke Show and was a regular on the gangster-comedy series The Chicago Teddy Bears (featuring Huntz Hall). In 1964 he appeared in an episode of Hazel as a soon-to-be father, who was an Italian restaurant owner. Farr also worked in TV commercials, including a memorable spot for Wonder Bread (as a vendor who says, "If it isn’t fresh, I’m outa business!").

In October 1972, he was hired for one day’s work as Corporal Maxwell Klinger on the M*A*S*H episode "Chief Surgeon Who?" His character wore dresses to try to convince the army that he was crazy and deserved a Section 8 discharge. Comedy writer and playwright Larry Gelbart has said that comedian Lenny Bruce’s attempt to be released from military service in World War II by dressing in a WAVES uniform was the original inspiration for the character of Klinger on the sitcom. He was asked back for a dozen episodes in the second season and he became a regular in the fourth. Eventually, his character gave up wearing women’s clothing after taking over the Company Clerk's position after the discharge of Radar O'Reilly. Like most of the characters on M*A*S*H, Corporal Klinger matured as the years passed. He gradually progressed from being a cross-dressing visual joke, and became a more sensitive and resourceful character. Klinger's colorful side emerged in new ways, as he used the Toledo wheeler-dealer skills he learned on the streets, to circumvent Army bureaucracy on the 4077's behalf.

His favorite episodes are "Officer of the Day" and "Big Mac".[6]

Farr and co-stars Harry Morgan and William Christopher spent two years starring in AfterMASH, the sequel that explored how civilian life treated their characters. While working on M*A*S*H, Farr also appeared in The Cannonball Run, Cannonball Run II and Speed Zone, making him the only actor to have appeared in all three Cannonball Run films.

Farr was a regular judge on The Gong Show in the late 1970s. He also appeared as a panelist on several other game shows including: The $25,000 Pyramid, Super Password, Body Language, Match Game-Hollywood Squares Hour, Wordplay, The $1.98 Beauty Show, The Magnificent Marble Machine, Tattletales and others.

He appeared in several made-for-TV movies such as Murder Can Hurt You, Return of the Rebels, and Combat Academy; he also guest-starred in Kolchak: The Night Stalker as a teacher, Mr. Burton, as well as a second-season episode of Emergency!.

Farr endorsed the U.S. Mars bar in commercials during the 1980s and received a star on the Hollywood Walk of Fame in 1985.

In the 1990s, Farr (and Nathan Lane) played the role of Nathan Detroit in a Broadway revival of Guys and Dolls. Farr is still active in regional theater and guest-stars occasionally on television.

Since 1984, he has hosted an annual women's professional golf tournament on the LPGA tour, the Jamie Farr Toledo Classic, presented by Kroger, Owens Corning and O-I in Sylvania, Ohio. The tournament has raised over $6.5 million for local children's charities.

In 1996–97 Farr went on a national tour with The Odd Couple, playing Oscar Madison, playing opposite his old friend William Christopher in the role of Felix Ungar. The two had appeared in several movies before they were eventually cast together in M*A*S*H.

On Memorial Day 2007, Farr hosted a multi-episode presentation of M*A*S*H on the Hallmark Channel. The featured episodes showcased Farr's performances on the show, with Farr providing commentary during commercial intermissions.

In 2007, Farr played Adam Johnson in Hallmark original movie A Grandpa for Christmas. The TV movie starred Ernest Borgnine in the role of Bert O'Riley.

Farr, Chuck Woolery, and Bob Eubanks were rotating hosts of the $250,000 Game Show Spectacular at the Las Vegas Hilton until the show ended in April 2008.[7]

After his role in the 1955 film Blackboard Jungle, he entered the United States Army for two years, serving overseas in Japan and Korea. His service in Korea was after the hostilities had ended.[9] In his M*A*S*H role as Max Klinger, he can be seen wearing his actual U.S. Army-issued dog tags.

The park in Toledo where Farr used to hang out when he was younger was renamed "Jamie Farr Park" in his honor on July 5, 1998. About the park, he said, "I wanted to be an actor, a famous actor, and I wanted my hometown of Toledo, Ohio, to be proud of me." Farr spoke to about four hundred admirers and was quoted in the New York Post: "Jamie Farr Park is certainly a highlight of my life and career."[10]

Further exemplifying Farr's love of Toledo was his frequent mention of Tony Packo's hot dogs, a Toledo staple, on M*A*S*H. He also was shown in many episodes as a Toledo Mud Hens fan.

Since 2000, Farr has frequently donated to the Republican National Committee.[11]

Farr has been married to Joy Ann Richards since 1963 and has two children, Jonas and Yvonne. He has a grandson named Dorian.[12]

Since the early 1990s, Farr has battled severe rheumatoid arthritis.

In 2003, Farr and his wife wrote a children's story called "Hababy's Christmas Eve",[13] which retells the First Christmas from the point of view of the animals.

Report a problem
Write to Jamie Farr at FanPal • 2021