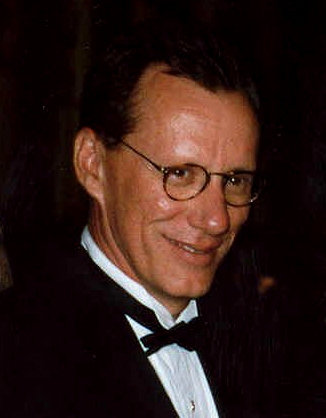 James Howard Woods (born April 18, 1947) is an American actor and producer. He is known primarily for playing villainous roles in film.

His most well known roles are Videodrome, Once Upon a Time in America, Casino, and Contact. Additionally, Woods has also been nominated for two Academy Awards, one in the Best Actor category for Salvador and the other in the Best Supporting Actor category for Ghosts of Mississippi. He is the recipient of three Emmy Awards for the television movies Promise and My Name Is Bill W. and the animated series Hercules. Promise additionally brought him a Golden Globe Award.

On television, he is known for portraying the lead character in Shark (2006-08) and for voice-acting as himself on eight episodes of Family Guy, as well as on one episode of The Simpsons. He has also voice acted as Mike Toreno in Grand Theft Auto: San Andreas and Hades in the Hercules film and TV series, and the Kingdom Hearts series.

Woods was born in Vernal, Utah, on April 18, 1947[1] and had a brother ten years younger.[2] His father, Gail Peyton Woods, was an army intelligence officer who died in 1960[3] after routine surgery. His mother, Martha A. (née Smith), operated a pre-school after her husband's death[4] and later married Thomas E. Dixon.[5] Woods grew up in Warwick, Rhode Island, where he attended Pilgrim High School, from which he graduated in 1965. He is of part Irish descent and was raised Catholic, briefly serving as an altar boy.[6][7]

He ultimately chose to pursue his undergraduate studies at Massachusetts Institute of Technology, where he majored in political science.[8] (Woods stated on Inside the Actors Studio that he'd originally planned a career as an eye surgeon.) While at MIT, Woods pledged to the Theta Delta Chi fraternity. He was also an active member of the student theatre group "Dramashop", where he both acted in and directed a number of plays. He dropped out of MIT in 1969, before graduating, to pursue a career in acting.[9]

Woods has said that he owes his acting career to Tim Affleck (father of actors Ben and Casey Affleck), who was a stage manager at the Theatre Company of Boston while Woods was a student there.[10]

Woods appeared in thirty-six plays before making his Broadway debut in 1970 at the Lyceum Theatre, in the first American production of Frank McMahon's Borstal Boy. He got the part by pretending he was British. He returned to Broadway the following year to portray David Darst in Daniel Berrigan's The Trial of the Catonsville Nine. In 1971, he played Bob Rettie in the American premiere of Michael Weller's Moonchildren at the Arena Stage in Washington, D.C. The production moved to Broadway the following year and Woods won a Theatre World Award for his performance. He returned to Broadway in 1973 to portray Steven Cooper in the original production of Jean Kerr's Finishing Touches.[11]

Woods at an AIDS Project Los Angeles benefit in September 1990

A prominent Hollywood character actor, Woods has appeared in over 130 films and television series as of 2013[update], beginning with his first television appearance All the Way Home in 1971 and his film debut The Visitors in 1972. He is known for his dark, intense characters and villains. Early examples include his portrayals of a sadistic murderer in 1979's The Onion Field,[8] and of serial killer Carl Panzram in 1994's Killer: A Journal of Murder. Woods appeared in an episode of The Rockford Files, playing a son whose parents were murdered. In 1984, he played Max, a domineering gangster, in Sergio Leone's epic Once Upon a Time in America, which Woods has regarded as one of his favorite roles.[12] He was first recognized by the Oscars when he was nominated for the Academy Award for Best Actor for the Oliver Stone drama Salvador (1986), portraying real-life journalist Rick Boyle as he chronicles events in El Salvador. Woods earned another Oscar nomination, the Academy Award for Best Supporting Actor for his role of the infamous white supremacist Byron De La Beckwith in Ghosts of Mississippi (1996).[8] In 1995, he took the role of Lester Diamond in Martin Scorsese's Casino. That same year, he portrayed H. R. Haldeman in Nixon, the biopic of Richard M. Nixon, directed by Oliver Stone. In 1999, he appeared in The General's Daughter. In one of his most prominent television roles, Woods starred in the CBS legal drama series Shark, which ran for two seasons between 2006 and 2008. He played an infamous defense lawyer who, after growing disillusioned when his client commits a murder, becomes a successful prosecutor with the Los Angeles County District Attorney's office.

Woods was offered a leading role in the low-budget film Reservoir Dogs, but his agent rejected the script without showing it to the actor. When Woods learned of this some time later, he fired his agents (CAA), replacing them with ICM.[13][14] In 2006, Woods starred in End Game. He makes a cameo appearance as himself in the first episode of the third season of Entourage. In 2011, Woods appeared as Richard S. Fuld, Jr., Chairman and CEO of Lehman Brothers, in HBO's Too Big to Fail, for which he gained an Emmy Award[15] nomination for Outstanding Supporting Actor in a Mini-series or Movie.[16]

Woods has lent his voice talents to many animated television shows and feature films. He garnered critical praise for his voice work as Hades in the 1997 Disney film Hercules[17] and he won a Daytime Emmy Award in 2000 for the role in the follow-up television series (for the 1999 season). He also voiced Phillium Benedict, the twisted former headmaster who attempts to abolish summer vacation in the 2001 film, Recess: School's Out. He also appeared as a fictional version of himself in the episode of The Simpsons entitled "Homer and Apu" and in eight episodes of Family Guy, which is set in Woods' home state of Rhode Island. Other references in Family Guy include the local high school, James Woods Regional High School, and a forest named James Woods mentioned in the episode "The Fat Guy Strangler". In 2004, Woods voiced Mike Toreno in Grand Theft Auto: San Andreas, followed by Jallak in the 2005 animated film Ark.

In 1980, Woods married costume designer Kathryn Morrison-Pahoa. The couple divorced in 1983.[18] In 1989 Woods married 26-year-old equestrian and boutique owner Sarah Owens, but they divorced four months later.[19] He has not since remarried nor does he have children.

During a press interview for Kingdom Hearts II, Woods noted that he is an avid video game player.[20] He is a dealer of antiques in Rhode Island.[21] On December 14, 2015, while Woods was driving alone westbound through an ice storm on Interstate 70 in Glenwood Canyon, Colorado, a driver who was speeding lost control and crashed into five other cars. Woods swerved his Jeep Grand Cherokee to avoid the accident and collided with a retaining wall, but slid backwards into a guard rail 100 feet (30 m) above the Colorado River. Woods suffered a minor concussion from the accident.[22][23]

Woods is an avid poker player, playing in cash games and many tournaments. He played in the WPT's Hollywood Home Game series in 2004 for the American Stroke Association charity. As of 2018[update], he has over 80 tournament cashes to his credit,[24] including a seventh place at the 2015 World Series of Poker in the $3000 No Limit Shootout event and a fifth place in the $1,500 Dealers Choice event at the 2018 WSOP.[24]

In 1988, Woods sued Sean Young for $2 million, accusing her of stalking him after they appeared together in the film The Boost.[25] Young later countered that Woods had overreacted after she had spurned his advances on set.[26] The suit was settled out of court in August 1989[27][28] including a payment of $227,000 to Young to cover her legal costs.[29]

On July 26, 2006, his younger brother Michael Jeffrey Woods died from cardiac arrest at the age of 49. Woods sued Kent Hospital in Warwick, Rhode Island, alleging negligence. The suit was settled in 2009.[30][31]

On July 30, 2015, he sued a Twitter user for $10 million over an allegedly libelous tweet.[32] In October 2015, Woods lost his legal bid to learn who was behind the Twitter account who accused him of being a "Cocaine Addict".[33] However, on February 2, 2016, Judge Mel Recana gave the go ahead to pursue the case further. It was believed that this would force Twitter to reveal the identity of the anonymous user.[34] On October 21, 2016, attorney Lisa Bloom revealed that the anonymous user had died, to which Woods said he hoped they had "died in agony".[35][36]

Woods has stated that he was a member of the Democratic Party up until the impeachment of Bill Clinton, commenting that "every single Democrat without exception stood behind a convicted perjurer. That was the end."[37]

Woods's name was in an advertisement in the Los Angeles Times (August 17, 2006) that condemned Hamas and Hezbollah and supported Israel in the 2006 Lebanon War.[38]

Early in the 2016 presidential race, Woods endorsed Carly Fiorina for the Republican nomination.[39] In November 2015, he shifted his endorsement to Senator Ted Cruz.[40]

On July 4, 2018, The Gersh Agency, Woods' long-time talent agency, notified him by email that they would no longer represent him. Woods stated that the agency dropped him due to his outspoken conservative views.[41][42][43]

In recent years, Woods has become known for frequently espousing his far-right conservative political views on his Twitter page, which reached one million followers in November 2017. In September 2018, the Associated Press reported that Twitter blocked his account over a hoax tweet purporting to be from the Democratic party telling men not to vote.[44][45]

In August 2017, Woods expressed his disgust over what he said was the "pathological" hatred which Donald Trump was being subjected to, which was retweeted by Trump.[46] Woods has promoted conspiracy theories on Twitter; in 2017, he used the platform to echo baseless claims that George Soros was behind a violent far-right rally in Charlottesville, Virginia,[47] and in 2018 he suggested that a series of mail bombs sent to Trump critics was a staged "political stunt," although he later deleted that tweet.[48]

Woods was raised Roman Catholic and stated on September 23, 2015, that he is involved in his faith.[49] He has criticized Pope Francis for tolerating what he called "pro-abortion hospitality".[50]

In September 2017, Amber Tamblyn wrote an open letter to Woods accusing him of predatory behavior towards her when she was 16. Woods denied the story.[51][52] The same month, actress Katie Aselton said that she also had "a James Woods story" from when she was 19 years old, asking "how many of us are there?"[53] In November 2017, actress Elizabeth Perkins, at a #MeToo rally, accused Woods of sexual misconduct.[54]