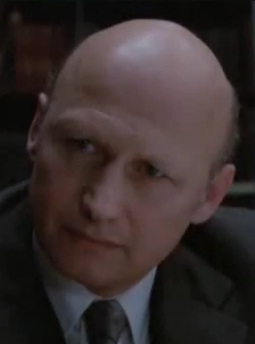 James Stewart Tolkan (born June 20, 1931) is an American actor, known for his work in films such as Serpico, Top Gun and the Back to the Future franchise.

Tolkan is known for his role in the 1985 film Back to the Future as the strict Hill Valley High School principal, Stanford S. Strickland; the character refers to Marty McFly, his father, and Biff Tannen derisively as "slackers". He would reprise the role in the 1989 sequel Back to the Future Part II, in which unnamed gang members make a drive-by assault on him in a dystopian 1985; he also refers to these criminals as "slackers" as he shoots back. In 1990, he played the part of Mr. Strickland's grandfather Chief Marshal James Strickland in Back to the Future Part III. Tolkan would again reprise his role as Strickland in addition to playing his character's ancestors and descendants in the 1991 animated series spin-off.

Other well-known roles include an FBI agent in WarGames and Stinger, the no-nonsense commanding officer of USS Enterprise's embarked Carrier Air Wing in the 1986 box-office hit Top Gun. He portrayed the role of cold and determined District Attorney Polito in Sidney Lumet's Prince of the City. He also appeared in the 1987 film Masters of the Universe as Detective Lubic. He had a dual role in the Woody Allen comedy Love and Death, playing both Napoleon and a look-alike.[5] He also appeared as Big Boy Caprice's accountant "Numbers" in the 1990 Warren Beatty film Dick Tracy. He appeared in Serpico (1973) in a small but notable role as a cop who loudly accuses Officer Serpico of having a gay encounter with another cop in the men's room.

Tolkan has also made guest appearances on many TV shows, including Naked City, Remington Steele, Miami Vice and The Fresh Prince of Bel-Air.[6]

A member of the repertory cast of A Nero Wolfe Mystery (2001-02), he played more than a dozen varied roles in the A&E TV series and also directed two episodes[5] ("Die Like a Dog" and "The Next Witness").

On August 28, 1971, Tolkan married Parmelee Welles, a staffer at the American Place Theater in New York.[1]