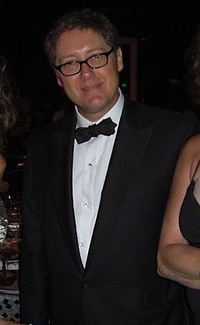 His best-known television roles are those of attorney Alan Shore in The Practice and its spin-off Boston Legal (for which he won three Emmy Awards), and Robert California in the comedy-mockumentary The Office. He currently stars as high-profile criminal-turned-FBI-informant Raymond "Red" Reddington in the NBC crime drama The Blacklist, for which he has earned two Golden Globe Award nominations.

Spader was born in Boston, Massachusetts, and is the youngest of three children. His parents, Jean (née Fraser) and Stoddard Greenwood "Todd" Spader, were both teachers.[1][2][3] Spader grew up in a liberal and progressive home, saying regarding his mother and two sisters, "I was always around dominant and influential women, and that left a great impression".[4] During his early education, he attended multiple private schools, including The Pike School, where his mother taught art, and the Brooks School in North Andover, Massachusetts, where his father taught.[4] He later transferred to Phillips Academy before dropping out at the age of seventeen and moving to New York City to pursue his acting career.[5][1] On his way to becoming a full-time actor, Spader undertook jobs such as bartending, teaching yoga, driving a meat truck, loading railroad cars, and being a stable boy.[5]
Read more...

Spader at the San Diego Comic-Con International to promote Avengers: Age of Ultron

Spader's first major film role was in the film Endless Love (1981), and his first starring role was in Tuff Turf (1985). However, he did not rise to stardom until 1986, when he played the rich, arrogant playboy Steff in Pretty in Pink. He co-starred in Mannequin (1987) and the film adaptation of Less Than Zero (1987), in which he played a drug dealer named Rip. Supporting roles in films such as Baby Boom (1987) and Wall Street (1987) followed until his breakthrough in Sex, Lies, and Videotape (1989), in which he played a sexual voyeur who complicates the lives of three Baton Rouge, Louisiana residents. For this performance, he received the Best Actor Award at the Cannes Film Festival.[6]

Spader's roles in the early 1990s included a young, affluent widower opposite Susan Sarandon in the romantic drama White Palace (1990), Rob Lowe in the Noir drama Bad Influence (1990), John Cusack's best friend in the drama True Colors (1991), and a poker-playing drifter in The Music of Chance (1993). In 1994, he starred as Egyptologist Daniel Jackson in the sci-fi film Stargate. In 1996, he played car accident fetishist James Ballard in the controversial Canadian film Crash and assassin Lee Woods in 2 Days in the Valley. In 1997, Spader guest starred in the Seinfeld episode "The Apology", as an angry recovering alcoholic who refuses to apologize to George for making fun of him. In 2000, he played a drug-addicted detective tracking down a serial killer in The Watcher. In 2002, he starred as a sadistic boss in Secretary.

From 2004 to 2008, Spader starred as Alan Shore in the series Boston Legal, in which he reprised his role from the television series The Practice. Longtime writer-producer David E. Kelley said he received a lot of push back from the powers that be when he first tried to cast Spader in the role."I was told that no one would ever welcome James Spader into their living room," Kelley recalled at a TV Game Changers panel presented by the Hollywood Foreign Press Association. "People will watch him in the movies, but they will never let him in their own home."[7]

In October 2006, Spader narrated "China Revealed", the first episode of Discovery Channel's documentary series Discovery Atlas. He has also done the voice-over in several television commercials for Acura.[10] He starred in Race, a play written and directed by David Mamet, which opened on December 6, 2009 at the Ethel Barrymore Theatre on Broadway.[11] The show closed on August 21, 2010 after 297 performances.[12] In March 2011, he was named to star in the film By Virtue Fall, written and to be directed by Sheldon Turner. As of June 2011[update], the movie was in pre-production.[13]

Spader guest starred as Robert California in "Search Committee", the season 7 finale of The Office. On June 27, 2011, it was announced that he would join the cast on a permanent basis.[14] He planned to stay only through the eighth season, and while the original plan was just to do the guest appearance, executive producer Paul Lieberstein said: "those two scenes became a season".[15]

Spader stars in the NBC series The Blacklist, which premiered on NBC September 23, 2013. He portrays Raymond "Red" Reddington, one of the FBI's most wanted fugitives. He also played villainous robot Ultron in Avengers: Age of Ultron (2015).

Spader has admitted to having strong obsessive-compulsive issues.[17]