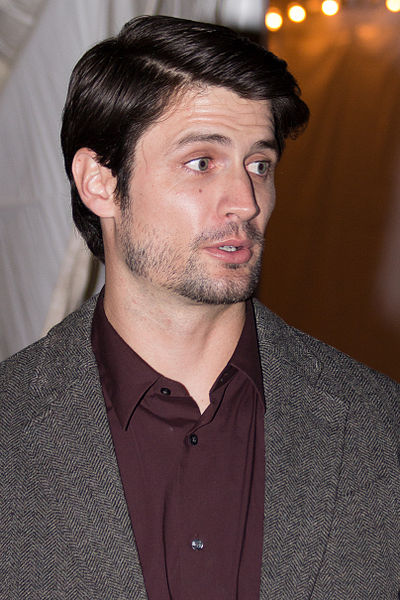 James Martin Lafferty (born July 25, 1985) is an American actor, director and producer. He is best known for his portrayal of Nathan Scott on The CW teen drama television series One Tree Hill from 2003 to 2012.

Lafferty was born in Hemet, California to Angelica and Jeffrey Lafferty, who own a local construction company.[1] He has a younger brother, actor Stuart Lafferty.

Having worked as an uncredited extra on television shows including Beverly Hills, 90210[2] and Dr. Quinn, Medicine Woman,[3] Lafferty received his first significant acting role in a school play when he was ten years old. Lafferty attended Hemet High School (where he played on the school's basketball team) until 2003, after which he enrolled at California State University, Long Beach. At age eighteen, he moved to Wilmington, North Carolina, having been cast as Nathan Scott in One Tree Hill.

In 1997, at age twelve, Lafferty made his small-screen acting debut with a voice-over role in the made-for-television film Annabelle's Wish. Lafferty has since made guest appearances on television series' such as Once and Again, Get Real, and Boston Public. In 2002, Lafferty starred in the ESPN made-for-television film A Season on the Brink, an adaptation of the book of the same name by John Feinstein. The film centered on the 1985-86 season of Indiana University's college basketball team.

In 2003, Lafferty was cast in his breakout role of Nathan Scott on The WB/The CW teen drama series One Tree Hill. The series follows two estranged half-brothers, Nathan and Lucas Scott, who are put on the same basketball team, jeopardizing Nathan's position as the star player. In May 2011, The CW renewed the series for a ninth and final season, for which Lafferty chose to return on a recurring basis rather than in a full-time starring role.[4] Over the course of the later seasons, Lafferty directed four episodes. He received four Teen Choice Award nominations throughout his time on the series.

In February 2008, Lafferty was cast in the straight-to-DVD sequel to the cult film Donnie Darko.[5][6] Titled S. Darko, the film was released in May 2009, and received mostly negative reviews from critics.[7] In April 2011, Lafferty was confirmed to star alongside One Tree Hill castmate Stephen Colletti and brother Stuart Lafferty in a planned adventurous reality television series entitled Wild Life: A New Generation of Wild, for which he was an executive producer. A pilot episode was filmed, however the series failed to find a network.[8] In 2013, Lafferty was cast in the NBC crime thriller series Crisis, as Mr Nash. This was followed by landing the lead role of Jimmy Adams in the independent movie Waffle Street, alongside Danny Glover, and being cast in a recurring role during the first season of WGN America's slave drama Underground.[9] In August 2015, Lafferty directed an episode of the second season of E! drama series The Royals, and returned to direct a few more episodes during season three.[10]

Lafferty currently resides in Los Angeles, California. An ardent basketball player, Lafferty was part of the New Orleans basketball team at the 2008 NBA All-Star Celebrity Game alongside Ne-Yo, Terrell Owens, Seth Gilliam, and Master P. The team defeated the Hornets 51-50.[11] He is a supporting partner of the Wilmington Sea Dawgs. From 2003 to 2008, Lafferty hosted an annual charity basketball event in Wilmington. In 2009, he announced that he was canceling the event, stating: "As a result of constant harassment and gross invasions of privacy via email and telephone, targeting myself, my friends and even my family, I no longer feel comfortable holding a fundraiser in such an intimate setting with fans."[12]