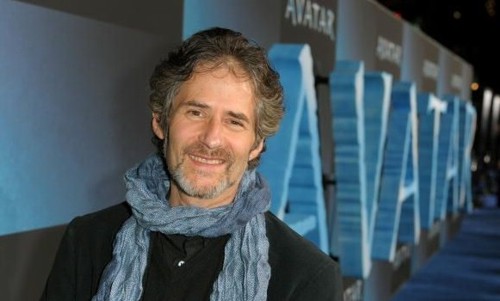 James Roy Horner (August 14, 1953 - June 22, 2015) was an American composer, conductor and orchestrator of film scores, writing over 100. He was known for the integration of choral and electronic elements, and for his frequent use of motifs associated with Celtic music.[1][2]

Horner's first major score was in 1979 for The Lady in Red, but he did not establish himself as an eminent film composer until his work on the 1982 film Star Trek II: The Wrath of Khan.[3] His score for James Cameron's Titanic is the best-selling orchestral film soundtrack of all time.[4][5] He also wrote the score for the highest-grossing film of all time, Cameron's Avatar.[6]

Horner, who was an avid pilot, died at the age of 61 in a single-fatality crash while flying his Short Tucano turboprop aircraft.[7]

His father, Harry Horner, was born in Holice, Bohemia, then a part of Austria-Hungary. He immigrated to the United States in 1935 and worked as a set designer and art director.[12][13] His mother, Joan Ruth (née Frankel), was born into a prominent Canadian family. His brother Christopher is a writer and documentary filmmaker.[11]

James Horner started playing piano at the age of five. He also played violin. He spent his early years in London, where he attended the Royal College of Music. He returned to America, where he attended Verde Valley School in Sedona, Arizona, and later received his bachelor's degree in music from the University of Southern California. After earning a master's degree, he started work on his doctorate at the University of California, Los Angeles (UCLA), where he studied with Paul Chihara, among others. After several scoring assignments with the American Film Institute in the 1970s, he finished teaching a course in music theory at UCLA, then turned to film scoring.[14] Horner was also an avid pilot, and owned several small airplanes.[15][16]

Horner's first credit as a feature-film composer was for B-movie director and producer Roger Corman's Battle Beyond the Stars.[17][18] As his work gained notice in Hollywood, Horner was invited to take on larger projects. One of his first major scores was for 1979's The Lady in Red.[19]

Horner's big break came in 1982 when he was asked to score Star Trek II: The Wrath of Khan. It established him as an A-list Hollywood composer. Director Nicholas Meyer quipped that Horner was hired because the studio could no longer afford the first Trek movie's composer, Jerry Goldsmith; but that by the time Meyer returned to the franchise with Star Trek VI: The Undiscovered Country, the studio could not afford Horner either.[20]

In 1987, Horner's original score for Aliens brought him his first Academy Award nomination.[22] "Somewhere Out There," which he co-composed and co-wrote with Barry Mann and Cynthia Weil for An American Tail, was also nominated that year for Best Original Song.[23]

Horner scored six films in 1995, including his commercially successful and critically acclaimed works for Braveheart and Apollo 13, both of which received Academy Award nominations.

Horner's biggest critical and financial success came in 1997 with his score for James Cameron's Titanic. At the 70th Academy Awards, Horner received the Oscar for Best Original Dramatic Score, and shared the Oscar for Best Original Song with co-writer Will Jennings for "My Heart Will Go On". The film's score and song also won three Grammy Awards and two Golden Globe Awards.[24][25] (Ten years earlier, Horner had vowed never to work with Cameron again, referring to the highly stressful scoring sessions for Aliens as "a nightmare".[26])

After Titanic, Horner continued to compose for major productions, including The Perfect Storm, A Beautiful Mind, Enemy at the Gates, The Mask of Zorro, The Legend of Zorro, House of Sand and Fog and Bicentennial Man.[10] He also worked on smaller projects such as Iris, Radio and Bobby Jones: Stroke of Genius. He received his eighth and ninth Academy Award nominations for A Beautiful Mind (2001) and House of Sand and Fog (2003), but lost on both occasions to composer Howard Shore.

Horner composed the 2006-2011 theme for the CBS Evening News, which was introduced during the debut of anchor Katie Couric on September 5, 2006.[27] He wrote various treatments of the theme, explaining, "One night the show might begin with the Iranians obtaining a nuclear device, and another it might be something about a flower show... The tone needs to match the news."[28]

Horner collaborated again with James Cameron on his 2009 film Avatar, which became the highest-grossing film of all time, surpassing Cameron's own Titanic.[23] Horner worked exclusively on Avatar for over two years. He said, "Avatar has been the most difficult film I have worked on, and the biggest job I have undertaken... I work from four in the morning to about ten at night, and that's been my way of life since March.[timeframe?] That's the world I'm in now, and it makes you feel estranged from everything. I'll have to recover from that and get my head out of ."[29]

Avatar brought Horner his tenth Academy Award nomination, as well as nominations for the Golden Globe Award, British Academy Film Award and Grammy Award, all of which he lost to Michael Giacchino for Up.[30]

After Avatar, Horner wrote the score for the 2010 version of The Karate Kid, replacing Atli Örvarsson.[31] In 2011, he scored Cristiada (also known as For Greater Glory), which was released a year later; and Black Gold. In 2012 he scored The Amazing Spider-Man, starring Andrew Garfield. In an interview on his website, Horner revealed why he didn't return to compose the second movie; that he didn't like how the movie resulted in comparison to the first movie, and even called the movie "dreadful."[32] Upon his departure, he was replaced by Hans Zimmer.

In early 2015, after a three-year hiatus, Horner wrote the music for the adventure film Wolf Totem, his fourth collaboration with director Jean-Jacques Annaud.[33]

At the time of his death, Horner had scored two films yet to be released:[34]

In July 2015, a month after his death, it was discovered Horner had also written the score for the 2016 remake of The Magnificent Seven, planning it as a surprise.[36]

Horner's scores are also heard in trailers for other films. The climax of Bishop's Countdown, from his score for Aliens, ranks as the 5th most commonly used soundtrack cue in trailers.[37]

Horner also wrote the theme music for the Horsemen P-51 Aerobatic Team, and appears in "The Horsemen Cometh", a documentary about the team and the P-51 Mustang fighter plane. The theme is heard at the team's airshow performances.

In 2014, Horner wrote Pas de Deux, a double concerto for violin and cello. Commissioned to mark 175th season of the Royal Liverpool Philharmonic Orchestra, the work was premiered on November 12, 2014 by Mari and Håkon Samuelsen, with the orchestra conducted by Vasily Petrenko.[38] Horner also composed Collage, a concerto for four horns, premiered on March 27, 2015 at London's Royal Festival Hall by the London Philharmonic Orchestra conducted by Jaime Martín, with soloists David Pyatt, John Ryan, James Thatcher and Richard Watkins.[39]

Horner was criticized for reusing passages from his earlier compositions, and for featuring brief excerpts and reworked themes from classical composers.[5] For example, his scores from Star Trek II: The Wrath of Khan and Star Trek III: The Search for Spock include excerpts from Prokofiev's Alexander Nevsky and Romeo and Juliet;[40][41] the famous action ostinato from Aliens is originally from Wolfen;[42] the heroic theme from Willow is based on that of Robert Schumann's Rhenish Symphony; Field of Dreams includes cues from the "Saturday Night Waltz" portion of Aaron Copland's soundtrack to Our Town, and the climactic battle scene in Glory includes excerpts from Wagner and Orff.[43] Some critics felt these propensities made Horner's compositions inauthentic or unoriginal.[44][45][46] In a 1997 issue of Film Score Monthly, an editorial review of Titanic said Horner was "skilled in the adaptation of existing music into films with just enough variation to avoid legal troubles".[5]

Horner was killed on June 22, 2015 when his Short Tucano turboprop aircraft,[47] registration number N206PZ, crashed into the Los Padres National Forest near Ventucopa, California.[16] Horner was the only occupant of the aircraft[48] when it took off after fueling at Camarillo Airport.[49] Three days later, on June 25, the Ventura County Medical Examiner's Office ruled the crash an accident.[50] He is survived by his wife, Sara Elizabeth Horner (née Nelson), and two daughters.

Contemporaries and collaborators around the world paid their respects to Horner, including composers Hans Zimmer, Paul Williams and Alan Menken, and directors Ron Howard[51] and James Cameron. Horner was reported to have been committed to the Avatar franchise; Cameron said he and Horner "were looking forward to our next gig."[52] Horner's assistant, Sylvia Patrycja, wrote on her Facebook page, "We have lost an amazing person with a huge heart and unbelievable talent died doing what he loved."[53] Many celebrities, including Russell Crowe, Diane Warren and Celine Dion, also gave their condolences.[54] Dion, who sang "My Heart Will Go On", one of Horner's most popular compositions and considered Dion's signature song,[55] wrote on her website that she and husband René Angélil were "shaken by the tragic death" of their friend and "will always remember his kindness and great talent that changed career."[56] Leona Lewis, who recorded Horner's "I See You" for Avatar, said working with him "was one of the biggest moments of my life."[57]

Post-accident investigation by the National Transportation Safety Board (NTSB) revealed that the leading cause of the accident was Horner's inability to maintain clearance from terrain during low-level airwork.[58] During the flight, Horner contacted the Southern California Air Route Traffic Control Center, from whom he received advisories while flying over the Chumash Wilderness area.[58] The NTSB interviewed two witnesses of the flight, who were in their homes when Horner flew over them; one said that the plane was flying at between 500 and 750 feet (150 and 230 m). FAA radar data showed that the plane had made multiple low-altitude turns and performed rapid altitude change maneuvers, flying low through Quatal Canyon and skimming mountain ridgelines by less than 100 feet (30 m).[59]

In addition to Horner's failing to maintain clearance, the NTSB determined there were other key factors that led to the accident. Foremost among these was Horner's use of prescription medications for high cholesterol and headaches, and toxicology testing found butalbital, codeine, and ethanol in Horner's body (although the ethanol may have been produced by microbial activity after his death).[59]

In October 2013, Horner received the Max Steiner Award at the Hollywood in Vienna Gala, an award given for extraordinary achievement in the field of film music.[63]

Report a problem
Biography of James Horner at FanPal • 2020