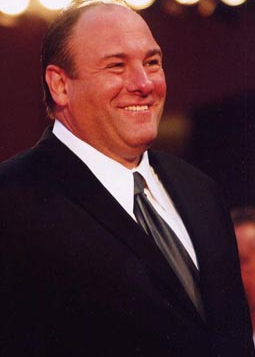 His notable film roles include mob henchman Virgil in True Romance (1993), Lt. Bobby Dougherty in Crimson Tide (1995), and Mayor of New York in The Taking of Pelham 123 (2009). Other roles are enforcer and stuntman Bear in Get Shorty (1995) and impulsive "Wild Thing" Carol in Where the Wild Things Are (2009). For his performance as Albert in Enough Said (2013), Gandolfini posthumously received much critical praise and several accolades, including a Screen Actors Guild Award nomination and the Boston Society of Film Critics Award for Best Supporting Actor.

In 2007, Gandolfini produced Alive Day Memories: Home from Iraq, a documentary in which he interviewed injured Iraq War veterans and in 2010, Wartorn: 1861-2010 examining the impact of posttraumatic stress disorder on soldiers and families throughout several wars in American history from 1861 to 2010.

Gandolfini was born in Westwood, New Jersey.[2] His mother, Santa (née Penna), was a high school lunch lady of Italian ancestry who was born in the United States and raised in Naples.[3][4] His Italian-born father, James Joseph Gandolfini Sr., was a native of Borgo Val di Taro who worked as a bricklayer and cement mason and later the head janitor at Paramus Catholic High School in New Jersey.[3][5][6] James Sr. earned a Purple Heart in World War II.[7] Gandolfini's parents were devout Roman Catholics and spoke Italian at home. Due to the influence of his parents, he developed a strong sense of Italian American identity and visited Italy regularly.[5][8] He had two sisters.[9][10]

Gandolfini grew up in Park Ridge, New Jersey and graduated from Park Ridge High School in 1979, where he played basketball, acted in school plays,[11] and was awarded the title "Class Flirt" in his senior yearbook. He earned a Bachelor of Arts degree in Communications from Rutgers University in 1982, where he worked as a bouncer at an on-campus pub.[12] He also worked as a bartender and club manager in Manhattan prior to his acting career.[12] He was introduced to acting as a young man living in New York City, when he accompanied his friend Roger Bart to a Meisner technique acting class,[13] where he studied for two years under Kathryn Gately at The Gately Poole Conservatory.[14]

Gandolfini performed in a 1992 Broadway production of On the Waterfront for six weeks. One of his earlier film roles was that of Virgil, a brutal mob enforcer, in the romantic thriller True Romance (1993), for which he said one of his major inspirations was an old friend of his who was a hitman.[15] In the film Terminal Velocity (1994), Gandolfini played Ben Pinkwater, a seemingly mild-mannered insurance man who turns out to be a violent Russian mobster. In 1995 he was in the box office hit Crimson Tide. In that same year in Get Shorty (1995), he appeared as a bearded ex-stuntman with a Southern accent, and in The Juror (1996), he played a mob enforcer with a conscience.[3]

Gandolfini received widespread acclaim for his performance as Tony Soprano, the lead character in the HBO drama The Sopranos, a New Jersey mob boss and family man whose constant existential questioning includes regular psychiatric appointments. The show debuted in 1999 and was broadcast until 2007. For his depiction of Soprano, Gandolfini won three Emmys for "Best Actor in a Drama" and Entertainment Weekly listed him as the 42nd Greatest TV Icon of All Time.[16] In addition to the awards that he won, Gandolfini received numerous nominations and two SAG Awards for being a member of the series' ensemble.[17]

In 2007 Gandolfini produced a documentary with HBO focused on injured Iraq War veterans and their devotion to America while surveying the physical and emotional costs of war. Gandolfini interviewed ten surviving soldiers, who revealed their thoughts about the challenges they face reintegrating into society and family life. They also reflected on their memories of the day when they narrowly escaped death and what life may have been like in other circumstances.[citation needed]

That same year, Gandolfini returned to HBO as the executive producer of the Emmy-nominated documentary special, Alive Day Memories: Home From Iraq, his first project after The Sopranos and the first production for his company Attaboy Films, which was opened in 2006 with producing partner Alexandra Ryan. He returned to the stage in 2009, appearing in Broadway's God of Carnage with Marcia Gay Harden, Hope Davis, and Jeff Daniels. He received a Tony Award nomination in the category of Best Performance by a Leading Actor in a Play for his role in the play, but lost to Geoffrey Rush, who played the lead in Exit the King. He played the Mayor of New York in the 2009 remake of The Taking of Pelham 123.

In 2010 Gandolfini produced another documentary with HBO, which analyzed the effects of posttraumatic stress disorder throughout American history, from 1861 to 2010. It featured interviews with American military officials on their views of PTSD and how they are trying to help soldiers affected by it. Letters from soldiers of the American Civil War and World War I who were affected by PTSD are examined, along with interviews with soldiers affected by PTSD and their families.[citation needed]

Gandolfini was executive producer of the HBO film about Ernest Hemingway and his relationship with Martha Gellhorn, titled Hemingway & Gellhorn (2012).[18] Gandolfini reunited with The Sopranos creator David Chase for Not Fade Away (2012), a music-driven production set in 1960s New Jersey, and the latter's feature film debut.[19][20]

Two films which he completed before his death on June 19, 2013, were released posthumously. The first was Enough Said, a romantic comedy which he co-starred with Julia Louis-Dreyfus. The film was met with positive reviews, particularly for Gandolfini's performance.[21] He received posthumous Best Supporting Actor awards from the Boston Society of Film Critics and the Chicago Film Critics Association as well as multiple nominations, including a nomination for the Screen Actors Guild Award for Outstanding Performance by a Male Actor in a Supporting Role.

His final film performance was in The Drop, a crime drama in which he co-starred with Tom Hardy and Noomi Rapace. Released September 12, 2014, the film was met with positive reviews for Gandolfini's performance.[22]

Gandolfini is credited as an executive producer on the HBO miniseries The Night Of which premiered in 2016. Gandolfini was set to star in the miniseries when it was pitched to HBO in 2013, but they ultimately decided not to go ahead with the show. HBO reversed their decision a few months later, and the show was green-lit, with Gandolfini still set to star, however he died before filming began. Actor John Turturro assumed the role intended for Gandolfini.

Gandolfini maintained ties with his Park Ridge, New Jersey hometown by supporting its Octoberwoman Foundation for Breast Cancer Research. He lived in New York City and owned a lot on the Lake Manitoba Narrows.[23] Gandolfini had lived on a 34-acre (14 ha) property in Chester Township, New Jersey.[24] In 2009 he purchased a home in the hills of Tewksbury Township, New Jersey.[25] GQ's Brett Martin said about Gandolfini: "In interviews, which the actor did his very best to avoid, the actor would often fall back on some version of 'I'm just a dumb, fat guy from Jersey.'"[26]

Gandolfini and his first wife, Marcy Wudarski, divorced in December 2002. They have a son named Michael (born 2000).[27] On August 30, 2008, after two years of dating, Gandolfini married former model and actress Deborah Lin in her hometown of Honolulu, Hawaii.[28] Their daughter, Liliana Ruth Gandolfini, was born in Los Angeles, California in October 2012.[29]

Gandolfini died suddenly at the age of 51 in Rome, on June 19, 2013. He was expected to travel to Sicily a few days later to receive an award at the Taormina Film Fest. After he and his family had spent a day of sightseeing in sweltering heat, his 13-year-old son Michael discovered him unconscious at around 10 pm local time, on the bathroom floor at the Boscolo Exedra Hotel in the Piazza della Repubblica. Michael called reception, who in turn called emergency paramedics. Gandolfini reportedly arrived at the hospital at 10:40 pm and was pronounced dead at 11 pm.[30] An autopsy confirmed that he had died of a heart attack.[31]

While word of his death spread, politicians such as John McCain and Chris Christie took to the Internet to respond.[32][33][34] Christie ordered all New Jersey State buildings to fly flags at half staff on June 24, to honor Gandolfini when his body was returned to the United States.[35] The people of Gandolfini's hometown started a Facebook page to discuss plans to honor him,[citation needed] including naming a street after him and renaming the Little Theater at Park Ridge High School after him, where he did his first performances.[36]

The day after Gandolfini's death, Bruce Springsteen and the E Street Band, which has long featured Sopranos co-star Steven Van Zandt on guitar, dedicated a performance of their classic album Born to Run (1975) by doing a rendition for Gandolfini.[37]

Gandolfini's funeral service was held on June 27, 2013, at the Episcopal Cathedral of Saint John the Divine in Morningside Heights, Manhattan. He was cremated, and his ashes were given to his family.

TV Guide published a special tribute to Gandolfini in their July 1, 2013, issue following his death, devoting the entire back cover of that issue to his image. In it, columnist Matt Roush cited Gandolfini's work as Tony Soprano as an influence on subsequent cable TV protagonists, saying: "Without Tony, there's no Vic Mackey of The Shield, no Al Swearengen of Deadwood, no Don Draper of Mad Men (whose creator, Matthew Weiner, honed his craft as a writer on The Sopranos)." Similar testimonials were given by his costars and colleagues, including Edie Falco, who expressed shock and devastation at his death;[40] Sopranos creator David Chase, who praised him as a "genius";[41] Bryan Cranston, who stated that his Breaking Bad character Walter White would not have existed without Tony Soprano;[42] and Gandolfini's The Mexican, True Romance and Killing Them Softly co-star Brad Pitt, who expressed admiration for Gandolfini as a "ferocious actor, a gentle soul and a genuinely funny man".[43]

Three months after his death, it was reported that in Gandolfini's last will and testament, dated December 19, 2012 and filed July 2, 2013 in Manhattan Surrogate's Court, he left a substantial portion of his estimated $70 million estate to his two sisters, widow, and daughter. The will did not state any inheritance for his only son, Michael, because Gandolfini provided for him a separate trust funded by a life insurance policy.[44] In December 2013, following an online petition campaign started by Gandolfini's high school classmate, Lori Fredrics, his hometown renamed its Park Avenue to James Gandolfini Way at a public ceremony attended by several of his former Sopranos co-stars.[45]

In 2014, Gandolfini was posthumously inducted into the New Jersey Hall of Fame.