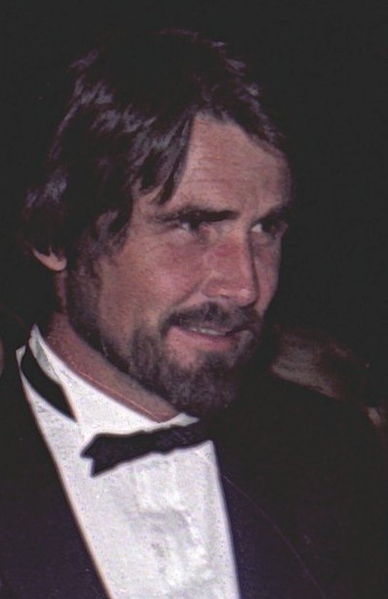 James Brolin (/ˈbroʊlɪn/; born Craig Kenneth Bruderlin, July 18, 1940) is an American actor, producer, and director, best known for his roles in film and television, including sitcoms and soap operas. He is the father of actor Josh Brolin and husband of Barbra Streisand. Brolin has won two Golden Globes and an Emmy. He received a star on the Hollywood Walk of Fame on August 10, 2016.

Brolin was born in Westwood, Los Angeles, California.[1][2] The eldest of two brothers and two sisters, he was the son of Helen Sue (née Mansur), a housewife, and Henry Hurst Bruderlin, a building contractor.[3][4] As a young child, he was apparently more interested in animals and airplanes, which he began building and flying when he was 10, than in acting. As a teenaged filmgoer in the mid-1950s, he was particularly fascinated with actor James Dean, and he began shooting 8 mm films.[1] When his parents invited a director over to his family's house for dinner before auditioning, he met another fellow actor and classmate, Ryan O'Neal, who was about a year younger than Brolin. The two clicked and later enrolled in University High School located in West Los Angeles. However, Brolin's own acting exposed his stifling shyness. His assurance grew when O'Neal invited him to a casting agency. Brolin graduated from high school in 1958, and his family was already encouraging him to become an actor like O'Neal.
Read more...

Brolin attended Santa Monica City College and studied drama at the University of California at Los Angeles before getting a contract with 20th Century Fox in 1960. At Fox, he started out as a contract player in Sandra Dee movies.[5] Brolin appeared on an episode of Bus Stop in 1961. The part led to parts in other television productions such as Voyage to the Bottom of the Sea; Margie; Love, American Style; Twelve O'Clock High; and The Long, Hot Summer. He made three guest appearances on the popular 1960s series Batman, alongside Adam West and Burt Ward, as well as roles in The Virginian, and Owen Marshall: Counselor at Law alongside Arthur Hill and Lee Majors. He also had a recurring role on the short-lived television series The Monroes.

At the age of 20, he changed his surname from "Bruderlin" to "Brolin" to become James Brolin. While in school struggling to make it big, he met actor Clint Eastwood. Brolin also had small roles in several films including Take Her, She's Mine (1963), Dear Brigitte (1965), Von Ryan's Express (1965), and Fantastic Voyage (1966). The following year, his first big role was in The Cape Town Affair (1967), but it did not receive any success at the box office. Brolin was ultimately fired by 20th Century Fox.

During the 1970s, the 6 ft 4 inch Brolin began appearing in leading roles in films, including Skyjacked (1972)[6] and Westworld (1973). By the mid 1970s, he was a regular leading man in films, starring in Gable and Lombard (1976), The Car (1977), Capricorn One (1978, in which he costarred with Elliott Gould, Streisand's ex-husband), The Amityville Horror (1979), Night of the Juggler (1980), and High Risk (1981). When Roger Moore expressed his desire to leave the role of James Bond, Brolin screen tested for the role in the next film Octopussy (1983) and was tentatively given the part. Ultimately, however, Moore decided to continue in the series.

In 1985, Brolin parodied his near-hiring as James Bond in the film Pee-Wee's Big Adventure. In a film within the film, he merged the characters of Bond and Pee-Wee Herman, the "real" version of whom was played by Paul Reubens. He is referred to as "PW" and the role of Pee-Wee Herman's girlfriend "Dottie" is played by Morgan Fairchild.

In 1968, Brolin transferred to Universal Studios, where he auditioned for a co-starring role opposite seasoned actor Robert Young in the popular medical drama Marcus Welby, M.D. (1969-1976). The series was one of the top-rated television shows of the day. Brolin became widely known for his portrayal of youthful, skilled assistant physician Dr. Steven Kiley. The chemistry between Young & Brolin clicked, and even came to attract young women for its medical interest throughout the show's run. In its first season in 1970, Brolin won the Emmy Award for Outstanding Performance by an Actor in a Supporting Role, and was subsequently nominated three more times. He was also nominated for Golden Globes three times for Best Supporting Actor, and won twice between 1971 and 1973. Brolin also starred in the television films Short Walk to Daylight (1972) and Trapped (1973). He and his first wife Jane also appeared on several episodes of the 1970s game show Tattletales.

In 1983, Brolin returned to television to star in another series and teamed with producer Aaron Spelling's prime-time soap opera, Hotel, for ABC.[7] On Hotel Brolin played Peter McDermott, a hotel manager.[8]

For Hotel Brolin was nominated twice for Golden Globes between 1983 and 1984 for Best Performance By an Actor in a TV Series, but did not win either time. He would eventually serve as a director on the show, as well. On one episode of Hotel, he invited his future wife Jan Smithers to guest-star on the show as the writers suggested that they develop a storyline for them, as Brolin was going through a difficult divorce at the time. By 1988, after 5 seasons, Hotel was about to close its doors for good and the show was cancelled. That same year, his co-star, Cook had died of an allergic reaction to penicillin, and Brolin along with the rest of his cast attended his funeral.

Actress Connie Sellecca said of Brolin's on-screen chemistry with her on Hotel, "I remember instantly feeling comfortable with Jim, and that's the thing that Jim has as to women, most women, they need to feel safe, and Jim gets that." She also said, "To have him in a different role and have that confidence, it was a wonderful experience." After the show's cancellation, Sellecca continues to be good friends with Brolin. In 1992, her mentor was in attendance at her wedding to John Tesh.

As the new decade approached, Brolin starred in both Angel Falls for CBS and Extreme for ABC, although neither matched the popularity of his earlier series.

In 1997, Brolin's luck changed with the syndicated television series Pensacola: Wings of Gold. He played the role of Lt. Col. Bill "Raven" Kelly, whose job was to teach young Marines in a special unit, before being promoted to work with a group of talented Marine fighter pilots. Brolin served as an executive producer and director on the series. In 2000, however, the show was cancelled after 66 episodes due to low ratings.

In 1997, he also hosted Beyond Belief: Fact or Fiction, a television series that shows five stories which have to do with the paranormal and supernatural. Jonathan Frakes took his place after the first season of the show.

In 1997, Brolin guest-starred on Roseanne. In Part 1 ("Lanford's Elite"), Roseanne & Jackie go to a luncheon at the Lanford Country Club, where they meet the son of their old boss Edgar Wellman Jr. (Brolin) of the Wellman Plastics factory. It appears that the factory is in need of financial help and Roseanne's money could save the factory. In Part 2 ("Some Enchanted Merger"), once the Wellman Plastics buyout is completed, Roseanne is at a loss for what to do when a mutual attraction springs between herself and Wellman.

Brolin has had a number of supporting roles in major cinema releases since 2000. These include (amongst others) the role of General Ralph Landry, outgoing director of the Office of National Drug Control Policy in Steven Soderbergh's Oscar-winning Traffic (2000); as Jack Barnes in Steven Spielberg's Catch Me If You Can (2002); a minor role in the 2003 comedy A Guy Thing; as philandering husband Robert Hatch in the 2006 comedy The Alibi (released in the UK as Lies and Alibis); as Jack Jennings in the 2007 film The American Standards; as TV network anchor Frank Harris in Richard Shepard's The Hunting Party (2007); and as Brian in Joel Hopkins' 2008 film Last Chance Harvey with Emma Thompson and Dustin Hoffman.

In 2002, Brolin played Governor Robert Ritchie of Florida, the Republican opponent of President Jed Bartlet, on the TV series The West Wing.

In late 2003, Brolin portrayed Ronald Reagan in the television film The Reagans. The film was originally meant to air on CBS, but after creative differences, scripts controversies, and rising costs, CBS passed on the film, and it aired on cable channel Showtime, also owned by Viacom. The role earned Brolin his fifth Emmy Award nomination, as well as his fifth Golden Globe nomination.

He also appeared in a 2009 episode of Psych, titled "High Noon-ish", in which he played the sheriff of a tourist-attracting "Wild West" town. The episode was in part a parody of the 1973 film Westworld, in which he had starred.

Brolin has played Richard Castle's mysterious father in two episodes of ABC's Castle, in 2013 and 2014.[9] He appeared in the NBC sitcom Community as William Winger, Jeff Winger's estranged father.

He is currently playing the role of John, the family patriarch, in the CBS comedy Life in Pieces.[10]

Brolin has been married three times and has three children.

In 1996, Brolin met Barbra Streisand through a friend, and they married on July 1, 1998. The couple reside in Malibu, California. Brolin is the stepfather of Streisand's only child, Jason Gould.