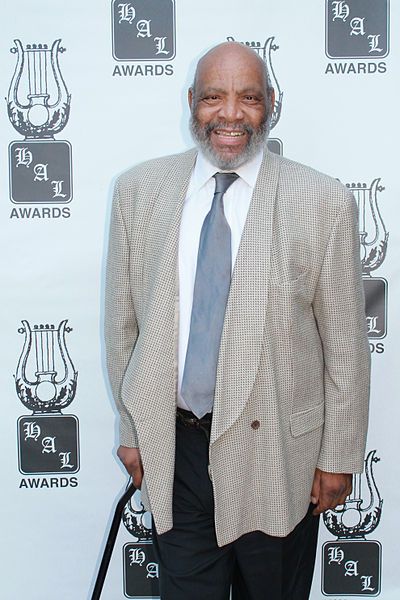 James LaRue Avery (November 27, 1945 - December 31, 2013) was an American actor and poet. A prolific television actor, he is best remembered for his portrayal of patriarch "Uncle Phil" Banks in the sitcom The Fresh Prince of Bel-Air. His voice acting work was mostly in animated series.

Avery was born in Pughsville, Virginia (now part of Suffolk, Virginia) on November 27, 1945, and raised in Atlantic City, New Jersey.[1][2] He served in the Vietnam War as a member of the U.S. Navy from 1968 to 1969, after graduating high school.[3] Later on, he moved to San Diego, California, where he began to write poetry and TV scripts for PBS.[3]

He won an Emmy for production during his tenure there and then received a scholarship to UC San Diego, where he attended Thurgood Marshall College (then Third College), earning a Bachelor of Arts degree in drama and literature in 1976.[4]

Avery began his career in the 1980s with appearances in television series such as Showtime sitcom Brothers as Bubba Dean, Amen, FM and L.A. Law. In the 1990s, he achieved prominence for his role as Phillip Banks (Uncle Phil) in The Fresh Prince of Bel-Air, a character that was ranked #34 in TV Guide's "50 Greatest TV Dads of All Time." He played the lead role of Alonzo Sparks in the comedy series Sparks that lasted for two seasons. Other notable roles in television included Dr. Crippen in The Closer, Charles Haysbert in The Division and Michael Kelso's commanding officer at the police academy late in the series run of That '70s Show.

Among his most notable voice credits are the voices of Shredder in the original Teenage Mutant Ninja Turtles animated series and James Rhodes/War Machine in the 1990s Iron Man series.[5] He also provided the voice of Junkyard Dog in Hulk Hogan's Rock 'n' Wrestling (1985-86), Turbo in Rambo and the Forces of Freedom (1986) and Haroud Hazi Bin in Aladdin (1994).

Avery was the commencement speaker for his alma mater, UC San Diego's Thurgood Marshall College in 2007, and again in 2012.[6]

In 1988, Avery married Barbara.[7] He had no children of his own, but was a stepfather to his wife's son, Kevin Waters.[citation needed]

Janet Hubert, who portrayed his original on-screen wife Vivian on The Fresh Prince of Bel-Air, said after his death, "RIP James, all the world is a stage, and we are all merely players in this production called LIFE."[11] Will Smith commented on Avery's death by saying, "Some of my greatest lessons in Acting, Living and being a respectable human being came through James Avery. Every young man needs an Uncle Phil. Rest in Peace."[12] Joseph Marcell called Avery a "gentle giant".[9]

Avery's remains were later cremated and scattered near the Pacific Ocean.

Report a problem
Biography of James Avery at FanPal • 2020