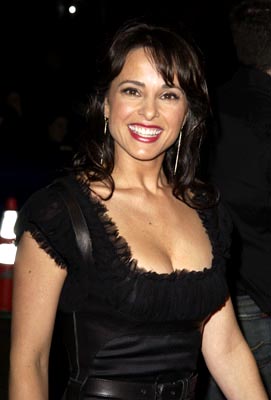 Obradors was born in the San Fernando Valley, the daughter of Argentine immigrants Angie, a church worker, and Albert Obradors, an office cleaning business owner. Before becoming an actress, Jaqueline was a cashier at Hughes Market in Canoga Park, California.[2]
Read more...

She is best known for playing supporting roles in Six Days, Seven Nights (as Angelica) and A Man Apart, and for her role as Detective Rita Ortiz on the ABC crime drama NYPD Blue (2001-2005). In 2001, Obradors voiced Audrey in Disney's Atlantis: The Lost Empire and its sequel, Atlantis: Milo's Return. In 2003's A Man Apart, she played Stacy Vetter, the murdered wife of Vin Diesel's character DEA Agent Sean Vetter. She appeared on Freddie as Sofia, Freddie's sister, during the 2005-2006 television season. She appeared in one episode of George Lopez as Angie's sister, Gloria. In 2010, she played the recurring role of Paloma Reynosa on NCIS.