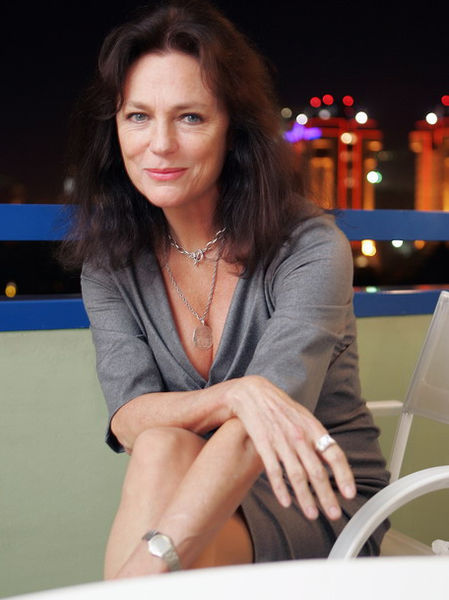 Winifred Jacqueline Fraser Bisset (/ˈbɪsɪt/ BISS-it; born 13 September 1944) is an English actress. She began her film career in 1965, first coming to prominence in 1968 with roles in The Detective, Bullitt, and The Sweet Ride, for which she received a most promising newcomer Golden Globe nomination. In the 1970s, she starred in Airport (1970), Day for Night (1973) which won the Academy Award for Best Foreign Language Film, Murder on the Orient Express (1974), The Deep (1977), and Who Is Killing the Great Chefs of Europe? (1978), which earned her a Golden Globe nomination as Best Actress in a Comedy.

Bisset was born Winifred Jacqueline Fraser Bisset[1] in Weybridge, Surrey, England, the daughter of Max Fraser Bisset, a general practitioner, and Arlette Alexander, a lawyer-turned-housewife.[2] Her mother was of French and English descent and her father was of Scottish descent;[3][4] Bisset's mother cycled from Paris and boarded a British troop transport in order to escape the Germans during the Second World War.[5]

Bisset grew up in Tilehurst, near Reading in Berkshire, in a 17th-century country cottage, where she now lives part of the year[6][7] She has a brother, Max. Her mother taught her to speak French fluently, and she was educated at the Lycée Français in London. She had taken ballet lessons as a child, and began taking acting lessons while working as a fashion model to pay for them. When Bisset was a teenager, her mother was diagnosed with disseminating sclerosis.[8]

Bisset first appeared uncredited as a prospective model in the 1965 film The Knack ...and How to Get It, directed by Richard Lester.

She made her official debut the following year in Roman Polanski's Cul-de-sac (1966), credited as "Jackie Bisset". She had a tiny part as a dancer in Drop Dead Darling (1966).

In 1967, Bisset had her first noticeable part in the Albert Finney/Audrey Hepburn vehicle Two for the Road, as a woman in whom Finney's character is romantically interested. It was made by 20th Century Fox.

Bisset had a more sizeable role in the James Bond satire, Casino Royale, as Miss Goodthighs.

Fox then cast Bisset in her first lead part in The Cape Town Affair, opposite James Brolin, filmed in South Africa.

She gained mainstream recognition in 1968 when she replaced Mia Farrow for the role of Norma MacIver in The Detective, opposite Frank Sinatra. The film was made at Fox, whose executives had been impressed by Bisset's performance in Two for the Road.

In the same year, she co-starred with Michael Sarrazin in Fox's The Sweet Ride, which brought her a Golden Globe nomination for Most Promising Newcomer. She capped her year as Steve McQueen's girlfriend in the police drama Bullitt, which was among the top five highest-grossing films of the year.

In 1969, Bisset had the star role in the sex comedy The First Time. In the same year she appeared in Secret World.

She was one of the many stars in the 1970 disaster film Airport; her role was that of a pregnant stewardess carrying Dean Martin's love child. It was a huge hit.

She had another starring part in The Grasshopper (1970), which was little seen, and was in The Mephisto Waltz (1971) with Alan Alda.

Bisset had the lead in a comedy Stand Up and Be Counted (1972). More popular was The Life and Times of Judge Roy Bean (1972), where she played the daughter of Paul Newman's title character.

She played the female lead in The Thief Who Came to Dinner (1973) with Ryan O'Neal, stepping in for a pregnant Charlotte Rampling.

Bisset went to France to appear in François Truffaut's Day for Night (1973), where she earned the respect of European critics and moviegoers as a serious actress. She stayed in that country to make Le Magnifique (1973) with Jean-Paul Belmondo, a hit in France but little seen in English-speaking countries.

Bisset was one of many stars in the British whodunnit Murder on the Orient Express (1974), an enormous success. In Britain she starred in the remake of The Spiral Staircase (1975).

Bisset went to Germany for End of the Game (1975) directed by Maximillian Schell. In Italy, she co-starred with Marcello Mastroianni in Luigi Comencini's The Sunday Woman in 1975.

The Deep and career peak

In 1977, Bisset gained wide publicity in America with her movie The Deep. Swimming underwater wearing only a T-shirt for a top helped make the film a box office success, leading producer Peter Guber to quip, "That T-shirt made me a rich man!"[10] and led many to credit her with popularising the wet T-shirt contest.[11] At the time, Newsweek declared her "the most beautiful film actress of all time". In 1978, a UK production titled Secrets Bisset had made in 1971 was released in the United States. The movie featured the only extensive nude scenes of Bisset's career and the producers cashed in on her fame.

Bisset at the 1989 Academy Awards

By 1978, she was a household name. In that year she earned a Golden Globe nomination for Best Actress (Comedy) for her performance in Who Is Killing the Great Chefs of Europe?, and starred opposite Anthony Quinn in The Greek Tycoon, playing a role based on Jackie Onassis.

After making Together? (1979) in Italy, she appeared in some all-star films, When Time Ran Out (1980), with Paul Newman, among others, and Inchon (1980) with Laurence Olivier. Both were big flops.

One of her well-known roles was in Class (1983), where she played Rob Lowe's attractive mother who has an affair with her son's prep school roommate (Andrew McCarthy).

She earned another Golden Globe nomination for her role in John Huston's Under the Volcano (1984) opposite Albert Finney.

Bisset has appeared in many made-for-TV movies since the mid-1980s, starting with the cable adaptation of Anna Karenina with Christopher Reeve in 1985. One of her later TV movies, in 2003, was America's Prince: The John F. Kennedy Jr. Story, in which she portrayed Jacqueline Bouvier Kennedy Onassis. Bisset's other television work includes the Biblical epics Jesus (1999) and In the Beginning (2000), and the miniseries Joan of Arc, which earned her an Emmy nomination for Best Supporting Actress.

In 1996, Bisset was nominated for a César Award for her role in the French film La Cérémonie. She appeared in the 16th-century period drama Dangerous Beauty (1998) as Catherine McCormack's mother, a retired Venetian courtesan, and had the leading role in the 2001 independent feature The Sleepy Time Gal, which premiered on the Sundance Channel and was cited by the Village Voice in its annual survey of the year's best undistributed films. In 2005, she was seen in the Domino Harvey biographical film Domino with Keira Knightley, directed by Tony Scott, in which Bisset played a fictionalized version of Paulene Stone (renamed "Sophie Wynn") whom she actually knew from her time as a model in London.

Bisset at the 2017 Cannes Film Festival

In 2006, Bisset had a recurring role on the TV series Nip/Tuck as the ruthless extortionist James. She starred in the lead role of Boaz Yakin's Death in Love which premiered at the 2008 Sundance Film Festival. Later that year, she starred in the Hallmark television film An Old Fashioned Thanksgiving. She finished filming The Last Film Festival in 2010, which was the final screen appearance of Dennis Hopper.

In 2010, Bisset was awarded the Légion d'honneur insignia, with French President Nicolas Sarkozy calling her "a movie icon".[12]

She returned to the UK to film Stephen Poliakoff's 1930s jazz drama series, Dancing on the Edge, which started on BBC2 in 2013.[13] For her work, she won the Golden Globe for Golden Globe Award for Best Supporting Actress - Series, Miniseries or Television Film. In 2015, she co-starred with Drew Barrymore and Toni Collette in the film Miss You Already.

In 2017, she played a recurring role in the TV series Counterpart.[14]

Bisset has never married, though she has had lengthy romances with French-Canadian actor Michael Sarrazin,[15] Moroccan real estate magnate Victor Drai,[16] Russian dancer/actor Alexander Godunov,[16] Swiss actor Vincent Pérez,[17] and Turkish martial arts instructor Emin Boztepe.[18] "There are so many misunderstandings in life. I once caused a scandal by saying I lived with two men. I didn't mean it in a sexual sense. We were just like any people sharing an apartment."[19]

Boztepe and Perez were 18 and 20 years her junior, respectively. Bisset has said,

I remember reading an article that referred to Emin as a "toy boy" and thinking "What on earth is that?" That phrase is one of the most insulting things - it's so rude and comes from pure jealousy I think. He was younger than me, but he was so much a man that calling him a toy boy was ludicrous! And I was so embarrassed for him because it was highly inappropriate. It's also disrespectful to talk about women as cougars. It's very derogatory and silly and all part of this negative kind of thinking that I try very hard to ignore. But they do say that sexually, a man is at his height at 18 and a woman at 35, so that's nature's way. I just think that people are attracted to what they want and need for however long it works.[20]