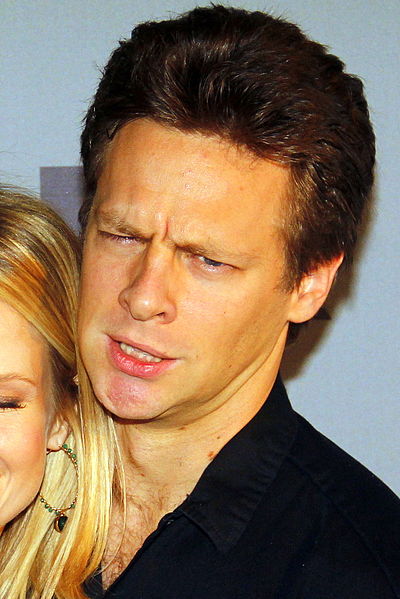 Jacob Pitts (born November 20, 1979) is an American actor. His most notable performance was in the 2004 film EuroTrip as Cooper Harris and as Bill "Hoosier" Smith in HBO's 2010 miniseries The Pacific. He appeared in the play Where Do We Live at the Vineyard Theatre in May 2004. Pitts has also appeared in TV shows such as Law & Order in 2000 where he played John Telford, and Ed where he played Johnny Malone.[2] Pitts also had a starring role as U.S. Marshal Tim Gutterson on the FX television drama Justified (2010-15).

Pitts grew up in Weston, Connecticut. In high school he was involved in the theater production company, and took part in productions while he was in school, including a performance as the Mysterious Man in Into The Woods.[1]
Read more...

Pitts began his career when he made his TV debut in 1999, and he appeared in an episode of Comedy Central's sitcom Strangers with Candy. He then went on to the New York Broadway stage in 2000, when he played Fleance from the Shakespearean play Macbeth.[1] After his Broadway production, he was cast to appear in an episode each of Law & Order and Sex and the City. In 2004, he played a role in Eurotrip, and in 2008 was cast in 21.[3]

In 2006, Pitts discussed his career motivations during an interview with Damien Echols:

Echols: What is your inspiration for acting? Why do you do it?

Pitts: Money. Very, very occasionally a piece of writing comes along that I personally connect with, that really twists something in me, that I will have nothing but the most fervent dedication to. In that case, I do it just for the gratification of being involved with the piece, just to say I was there. But like I said, that's about .01% of the time. Not that I'm complaining-- when it's otherwise, I'm very well overpaid.[4]

In 2008, Pitts was presented the Best Ensemble Award at the ShoWest Convention in the United States for his part in 21. The award was also presented to Jim Sturgess, Kevin Spacey, Kate Bosworth, Laurence Fishburne, Aaron Yoo, Liza Lapira, and Josh Gad for their parts in the movie.[5]