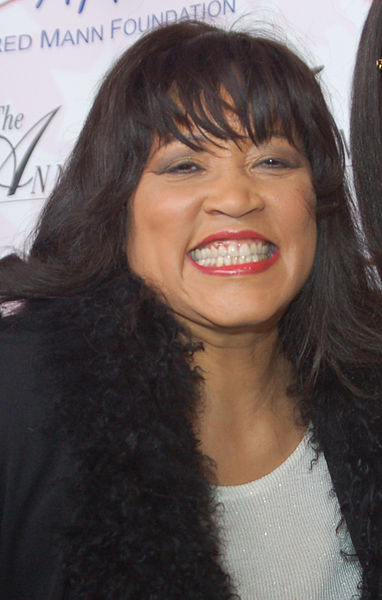 Jacqueline Yvonne Harry (born August 14, 1956), better known by her mononymous stage name Jackée, is an American actress, singer, comedian, director, and television personality.[1] She is best known for her roles as Sandra Clark, the sexy nemesis of Mary Jenkins (played by Marla Gibbs), on the NBC TV series 227 (1985-90), and as Lisa Landry on the ABC/The WB sitcom Sister, Sister (1994-99). She is noted for being the first and currently only African-American to win an Emmy Award for Outstanding Supporting Actress in a Comedy Series.

Harry was born in Winston-Salem, North Carolina, in 1956, and raised in Harlem, New York,[2] to an Afro-Trinidadian mother and African-American father. Harry began studying acting at the High School of the Performing Arts in Midtown Manhattan in New York City.[2] Harry graduated from Long Island University with a Bachelor of Arts in education. She worked as an American History teacher at Brooklyn Technical High School for two years before beginning a career on the New York stage.[3][4][5]
Read more...

In 1978, Harry made her Broadway debut in A Broadway Musical.[5] Throughout the 1980s she starred in numerous productions both on and off Broadway, and in national touring productions. In 1994, Harry made her return to the theater by starring as Billie Holiday in the play Lady Day at Emerson's Bar and Grill. Following that stage production, she fulfilled the role of "madam who runs a bordello" in the Broadway musical The Boys from Syracuse. In the mid-2000s, she appeared in stage productions of The Sunshine Boys, Damn Yankees, and A Christmas Carol. She also toured nationally in JD Lawrence's The Clean Up Woman.[6]

In 1983, Harry made her acting debut in Another World as Lily Mason, a role she continued until 1986.[5] In 2003, she was a surprise guest on the Another World Reunion that SOAPnet coordinated and aired.[citation needed] In 1985, Harry began a co-starring role as Sandra Clark, on the NBC sitcom 227.[5][7] Her mother, Flossie, celebrated her getting the role but died before the show started airing. During the series run, Harry and Marla Gibbs began feuding privately over who was the series' lead. They have since reconciled and collaborated on a number of projects.[8] Her performance on 227 inspired NBC producers to create a television pilot for her entitled Jackée. Although the pilot episode was a success with audiences, the series did not last and the episode is now shown as an episode of 227.

After leaving 227 in 1989, Harry starred opposite Oprah Winfrey in The Women of Brewster Place, an adaptation of Gloria Naylor's novel of the same name.[9] In 1990, she headlined an NBC comedy pilot from Witt/Thomas titled We'll Take Manhattan; it aired as a summer special that year, but did not make it to series. In late 1991, she joined the cast of The Royal Family after the star, Redd Foxx, unexpectedly died.[10] She starred opposite two-time 227 guest-star Della Reese. In 1992, she starred as the assistant coach in Ladybugs.[11] Harry served as a guest panelist on the 2000 revival of To Tell the Truth and appeared on the second season of VH1's Celebrity Fit Club 2 in 2005.[12][13] From 1994 until 1999, Harry played Lisa Landry, the adoptive mother of Tia Mowry's character, on the sitcom Sister, Sister.[14]

She had a recurring role as Vanessa on the UPN/The CW series Everybody Hates Chris and had a recurring role on the BET Series Let's Stay Together.[11][15] She is starring in Byron Allen's syndicated sitcom The First Family, which also features Marla Gibbs in a recurring role. On April 12, 2013, it was announced that she was cast in the episodes "Girl Meets Crazy Hat" and the pilot of Disney sitcom Girl Meets World. Later, she also appeared in "Girl Meets Demolition". That same year, she also joined Gibbs in the movie Forbidden Woman. In 2014, she made a guest appearance on Instant Mom as her character Lisa Landry.[16] She appeared in the 2 Broke Girls episode "And the Sax Problem" in 2016, as Earl's ex and lounge owner.