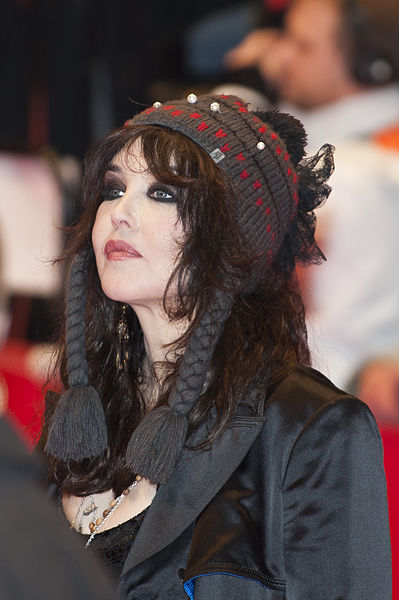 Isabelle Yasmina Adjani (born 27 June 1955) is a French film actress and singer. She is one of the most acclaimed French actresses of all time and is the only actress or actor in history to win five César Awards; she won Best Actress for Possession (1981), One Deadly Summer (1983), Camille Claudel (1988), La Reine Margot (1994), and Skirt Day (2009). She was made a Chevalier of the Legion of Honour in 2010, and a Commander of the Order of Arts and Letters in 2014.

Adjani's performance as Adèle Hugo in the 1975 film The Story of Adele H. earned her the first of two nominations for the Academy Award for Best Actress. Her second nomination—for Camille Claudel—made her the first French actress to receive two nominations, both for foreign-language films. She won Best Actress at the 1981 Cannes Film Festival for her performances in Possession and Quartet, and, later, she won the Silver Bear for Best Actress at the 1989 Berlin Film Festival for Camille Claudel. Her other notable film performances include The Tenant (1976), Nosferatu the Vampyre (1979), Subway (1985), Diabolique (1996), and French Women (2014).

Isabelle Yasmina Adjani was born on 27 June 1955 in the 17th arrondissement of Paris, to Mohammed Cherif Adjani, an Algerian Kabyle father from Constantine and Emma "Gusti" Augusta Schweinberger, a German Catholic mother from Bavaria.[2][3][4][5][6][7]

"Gusti" met Adjani's father, Mohammed Adjani, near the end of World War II, when he was in the French Army. They married and she returned with him to Paris, not speaking a word of French.[8][9] She asked him to take Cherif as his first name as it sounded more "American".[10]

Isabelle grew up bilingual, speaking French and German fluently,[11][12][13] in Gennevilliers, a northwestern suburb of Paris, where her father worked in a garage.[14] After winning a school recitation contest, Adjani began acting by the age of 12 in amateur theater. She successfully passed her baccalauréat and was auditing classes at the University of Vincennes in 1976.[3]

At the age of 14, Adjani starred in her first motion picture, Le Petit Bougnat (1970).[15] She first gained fame as a classical actress at the Comédie-Française, which she joined in 1972. She was praised for her interpretation of Agnès, the main female role in Molière's L'École des femmes. She soon left the theatre to pursue a film career.

After minor roles in several films, she enjoyed modest success in the 1974 film La Gifle (The Slap), which François Truffaut saw. He immediately cast her in her first major role in his The Story of Adèle H. (1975) which he had finished writing five years prior. Critics praised her performance,[3] with the American critic Pauline Kael describing her acting talents as "prodigious".[16]

Adjani at the 35th César Awards

Only 19 when she made the film, Adjani was nominated for the Best Actress Oscar, making her the youngest best actress nominee at the time (a record she held for over 30 years). She quickly received offers for roles in Hollywood films, such as Walter Hill's 1978 crime thriller The Driver. She had previously turned down the chance to star in films like The Other Side of Midnight. She had described Hollywood as a "city of fiction" and said, "I'm not an American. I didn't grow up with that will to win an award." Truffaut on the other hand said, "France is too small for her. I think Isabelle is made for American cinema."[3] She agreed to make The Driver because she was an admirer of Hill's first film Hard Times. Adjani said:

I think he is wonderful, very much in the tradition of Howard Hawks, lean and spare. The story is contemporary but also very stylized, and the roles that Ryan and I play are like Bogart and Bacall. We are both gamblers in our souls and we do not show our emotions or say a lot. For us, talk is cheap. I am really quite a mysterious girl in this film, with no name and no background. And I must say that it is restful not to have a life behind me; this way, I don't have to dig deep to play the part. All I know is that life for me is gambling and I am a loser. I have what people call a poker face.[17]

The film was seen more than 1.1 million times in Adjani's native France but did not do as well in the US.[18]

She played Lucy in the German director Werner Herzog's 1979 remake of Nosferatu which was well-received critically and performed well at box offices in Europe.[19] Roger Ebert loved the film, calling Herzog's casting of Adjani one of his "masterstrokes" in the film. He wrote that she "is used here not only for her facial perfection but for her curious quality of seeming to exist on an ethereal plane."[20] The cast and the crew filmed both English- and German-language versions simultaneously upon request of 20th Century Fox, the American distributor,[21] as Kinski and Ganz could act more confidently in their native language.

In 1981, she received a double Cannes Film Festival's Best Actress award for her roles in the Merchant Ivory film Quartet, based on the novel by Jean Rhys, and in the horror film Possession (1981). The following year, she received her first César Award for Possession, in which she had portrayed a woman having a nervous breakdown. In 1983, she won her second César for her depiction of a vengeful woman in the French blockbuster One Deadly Summer. That same year, Adjani released the French pop album Pull marine, written and produced by Serge Gainsbourg. She starred in a music video for the hit title song, "Pull Marine", which was directed by Luc Besson.

In 1988, she co-produced and starred in a biopic of the sculptor Camille Claudel. She received her third César and second Oscar nomination for her role in the film, becoming the first French actress to receive two Oscar nominations. The film was also nominated for the Academy Award for Best Foreign Language Film.

She received her fourth César for the 1994 film Queen Margot, an ensemble epic directed by Patrice Chéreau. She received her fifth César for Skirt Day (2009), the most that any actress has received. The film features her as a middle school teacher in a troubled French suburb who takes her class hostage when she accidentally fires off a gun she found on one of her students. It was premiered on the French Arte channel on 20 March 2009, attaining a record 2.2 million viewers) and then in movie theaters on 25 March 2009.[22]

In 1979, she had a son, Barnabé Saïd-Nuytten, with the cinematographer Bruno Nuytten,[11] whom she later hired to direct her project Camille Claudel, a biopic of the sculptor who was best known as the lover of Rodin.[14]

Adjani was later engaged to the composer Jean-Michel Jarre; they broke up in 2004.[23]

She has been vocal against anti-immigrant and anti-Algerian sentiment in France.[14]

In 2009, Adjani criticized statements by Pope Benedict XVI claiming that condoms are not an effective method of AIDS prevention.[24]

In addition to specific awards for particular films, Adjani was made a Chevalier de la Légion d'honneur on 14 July 2010 for her artistic contributions.[25]