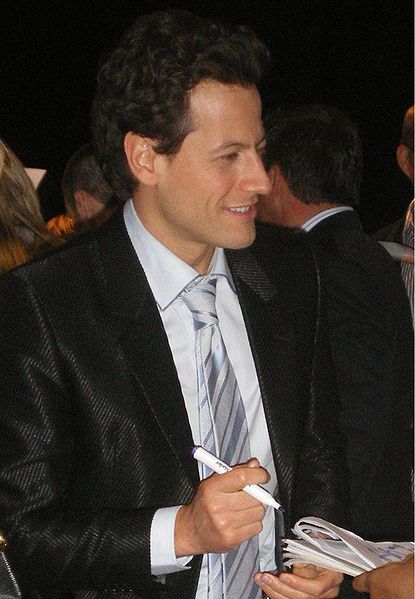 Gruffudd was born on 6 October 1973 in Llwydcoed, Aberdare, Wales,[1] the eldest of three siblings. Gruffudd's parents, Peter and Gillian (née James) Gruffudd, were both teachers.[2]

His father was headmaster at two Welsh comprehensive schools in South Wales, first at Ysgol Gyfun Llanhari (in Llanharry, Rhondda Cynon Taf) then later at Ysgol Gyfun Rhydfelen (in Rhydfelin). He has a brother, Alun,[3] two years younger, and a sister, Siwan, who is seven years his junior.[4] The Gruffudd siblings were raised in a Protestant non-conformist household.[5]

The Welsh name "Ioan", is an equivalent of "John", and "Gruffudd" corresponds to the anglicised "Griffith".

He was an accomplished oboist in his teens,[6] achieving a Grade 8 level in the ABRSM music examinations[7] and playing in the South Glamorgan Youth Orchestra for several years,[8] but gave it up once acting took up most of his time. He won prizes for his high baritone singing while at school, including one at the National Eisteddfod.[7] He has said, "As a Welshman, I grew up in a culture of singing and performing with music, and I think it was through this performing that I got my confidence as an actor."[9]

Gruffudd's parents are committed Christians, and in his early 20s he was a member of the London Church of Christ, but his mother later came to London to "sort head out".[10] In June 2007, he said that he "wouldn't describe myself as a deeply religious man".[11]

Gruffudd started his acting career at the age of 13 in a Welsh television film, Austin (1986), and later moved on to the Welsh language soap opera Pobol y Cwm (People of the Valley) from 1987 to 1994. He also played football with the Pobol y Cwm football team Cwmderi FC alongside co-stars Hywel Emrys, Gwyn Elfyn and Ieuan Rhys. During this time, he was also active on stage, in school performances, and in the 1991 Urdd Eisteddfod production of Cwlwm.[12]

In 1992, aged 18, he began attending the Royal Academy of Dramatic Art (RADA) in London. However, he was only given small parts in the Academy's productions, and feeling isolated and directionless, almost dropped out several times. However, in 1995 in his final year, he was cast in Ibsen's Hedda Gabler as George (Jörgen) Tesman, the husband of Hedda, the lead character. This performance led to him being offered the lead role in the 1996 TV remake of Poldark.[6][13]

After playing Oscar Wilde's lover John Gray in 1997's Wilde he took his first role as Fifth Officer Harold Lowe in the blockbuster film Titanic. He later landed the role of Horatio Hornblower in Hornblower, the Meridian production of the C. S. Forester novels (1998-2003), shown on ITV1 and A&E. He has said: "It was quite something for an unknown actor to get the lead. So I will always be grateful to Hornblower. ... I would love to play this character through every stage of his life. I think it would be unique to have an actor playing him from the very early days as a midshipman, through till he's an Admiral. So, I would love to play this character till he perishes."[9]

His television work includes playing the character Pip in the BBC TV production of Charles Dickens' Great Expectations (1999), Lt. John Feeley in BBC One's Warriors (1999) and architect Philip Bosinney in ITV's adaptation of The Forsyte Saga (2002). He has starred in the films 102 Dalmatians (2000), Black Hawk Down (2001) and King Arthur (2004).

In 2007, he starred in the historical drama Amazing Grace as William Wilberforce, the British abolitionist, receiving critical acclaim for the role. Gruffudd has also portrayed characters of both Marvel Comics and DC Comics, having appeared as Mister Fantastic (Reed Richards) in Marvel's Fantastic Four (2005) and Fantastic Four: Rise of the Silver Surfer (2007), and provided the voice of Mister Miracle in DC's Justice League Unlimited (2004-06).

In 2008, he appeared in the Julia Roberts-Ryan Reynolds film, Fireflies in the Garden. In 2008, he also appeared in The Secret of Moonacre. In 2009, he starred alongside Josh Brolin in W., a biopic about the life of US President George W Bush, in which Gruffudd played Tony Blair.[14] In 2011, he played the financier of a cave dive in Sanctum.

Gruffudd débuted his new male lead of Dr Andrew Earlham, a respected surgeon and widowed father of a teenage son, on 11 September 2017, in ITV's new 6-part thriller miniseries, Liar. Dr Earlham's world—personally and professionally—is torn asunder when his son's schoolteacher, Laura Neilson (Joanne Froggatt) accuses him of raping her after their first date, the details of which she cannot remember. Liar also began airing in the US on SundanceTV on 25 September 2017.

Apart from television and film work, he starred in the music video of Westlife's version of "Uptown Girl" (2001) alongside Claudia Schiffer. On 7 July 2007 he was a presenter at the UK leg of Live Earth at Wembley Stadium, London.[15]

Gruffudd is a native Welsh speaker. He was inducted into the Gorsedd Beirdd Ynys Prydain (the Bardic Order of Great Britain) at the highest rank of druid in the National Eisteddfod at Meifod, mid-Wales, on 4 August 2003, with the bardic name "Ioan".[2][16]

In July 2008 he featured in a promotional trailer in Welsh for BBC Wales, alongside fellow Welshmen Matthew Rhys and Gethin Jones, publicising BBC coverage of the 2008 National Eisteddfod of Wales in Cardiff.[17] In early 2014, Gruffudd was among the stars of Wales in a short film from the BBC to mark the centenary of the birth of Welsh poet Dylan Thomas.[18]

Gruffudd lives with his wife, actress Alice Evans, in Los Angeles. The couple met during the production of 102 Dalmatians, while she was engaged and living with Olivier Picasso (a grandson of Pablo Picasso), and married on 14 September 2007 in Mexico.[19] One of Gruffudd's best men and speechmakers at the wedding was fellow Welsh actor Matthew Rhys, his long-time friend and former flatmate of eight years.[3] Both are patrons of Trust PA, a UK spinal injuries charity.[20]

Gruffudd enjoys being in Los Angeles because "it's the easiest place in the world to drive, and it's a real pleasure to do that in my black Jag XK8. I've gone all out."[6] Gruffudd has also said that "There's a physicality and confidence to Americans; they're very present. That's something I enjoy being around because it rubs off on you. Although an actor friend of mine visited recently and said, 'It's no wonder they write such terrible scripts these days, there's no pain! Everything's so nice you can't be bothered'."[6]

Some information in this table was obtained from "Ioan Gruffudd CV". Hamilton Hodell Talent Management. Archived from the original on 16 December 2007. Retrieved 15 May 2008.

Report a problem
Write to Ioan Gruffudd at FanPal • 2020