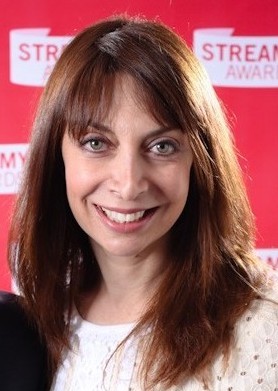 Illeana Hesselberg (born July 25, 1965), most commonly known as Illeana Douglas,[1] is an American actress, director, screenwriter, and producer. Douglas has had a long-ranging diverse career as a character actor with a specialty in comedy. Notable works include work in a 2001 episode of Six Feet Under - for which she received a Primetime Emmy nomination as Outstanding Guest Actress in a Drama Series and won the Best Guest Actress in a Drama Series award from OFTA, the Online Film & Television Association - and her work in the TV series Action opposite Jay Mohr - for which she won a Satellite Award for Best Actress - Television Series Musical or Comedy. She can currently be seen on Turner Classic Movies where she hosts specials focused on unheralded women directors from film history.[2][3]

Douglas was born in Quincy, Massachusetts, the daughter of Joan Douglas (née Georgescu),[1][4] a schoolteacher, and Gregory Douglas, a painter.[5] Douglas' father was the son of Hollywood actor Melvyn Douglas and his wife, the artist Rosalind Hightower.[6] Douglas had two older brothers, the late Stefan Gregor Hesselberg,[4][7] a technician in the histology laboratory at the Massachusetts Institute of Technology who also trained racehorses in Verona, Italy, and Erik Hesselberg, a journalist.[1]

Douglas grew up in Connecticut, in the Old Saybrook area, but said that really she grew up all over, in Massachusetts where her father lived, Connecticut where her mother lived, and New York, where her extended family lived. During her childhood she spent time going back and forth between relatives during the summer.[8] Douglas said that her parents were heavily influenced by the 1970s hippie culture—her father especially by the movie Easy Rider. They had a loose parenting style and did not pressure her to go to college. Comedy albums were really big in her family. The family would put on dramatic interpretations and performances.[9]

Douglas' mother's side is Catholic,[9] Italian and Romanian[10] from Astoria, Queens. Her maternal grandmother worked in the restaurant at Gertz' department store in Astoria and her maternal grandfather was a welder.[8] Douglas said that her maternal grandmother, a former Rockette, had really wanted to be an actor. She instilled in Douglas a love for the movies, which they attended together frequently when she was a child.[9]

As a child she would visit her paternal grandfather, the actor Melvyn Douglas, in his apartment in Manhattan on the Upper West Side as well as his home in the Hollywood Hills section of Los Angeles on Senalda Road off Outpost Drive.[6][8] Douglas said her summers with Melvyn Douglas were about experiencing with him his love of theater and elocution as well as reading, art, and history.[9]

Douglas has said that her grandfather's performance in Being There was influential on her own career.[6][11] In the 1940s, Douglas' grandfather and Peter Sellers both served in the military during WWII and met in Burma. In the 1960s, the two men reconnected in London and talked about their time together in the war.[11] During high school, Douglas visited the set while they were shooting on location in Asheville, North Carolina and got to meet Sellers, whose work she admired greatly. It was the first time she was on a film set.[9]

Douglas notes the contrast between her working-class Italian roots and the glamorous Hollywood world of her paternal side of her family. Famous people like Myrna Loy, Gore Vidal, Gloria Steinem, politicians, writers, and others were always around in a salon-type world. Douglas said it took her a long time to figure out the contrasting diversity, to put both halves together. She identifies more with the Italian side of her family, that she developed more of their "rhythms and ways" because she spent so much time with them in Queens.[8]

After graduating from high school, Douglas moved to New York City.[8] Obsessed with the movies from her childhood, Douglas wanted to be in show business.[9] She stayed with relatives in various temporary arrangements. Douglas attended American Academy of Dramatic Arts, where she was a contemporary of Elias Koteas and Lou Mustillo. Mustillo and Douglas were not asked back to school after their first year.[8]

When she was 18 years old, Douglas went to work for Steve Rubell at the Morgans Hotel. While there, Douglas decided to reinvent herself and began attending Neighborhood Playhouse School of the Theatre, where she studied with the acting teacher Richard Pinter.[8] While she was working in a sketch comedy group called Manhattan Punchline, one of the troupe members suggested she try stand-up comedy.[9] Douglas decided to give it a try, working briefly at Stand Up New York. She found the writing and acting easy, but the performing very difficult. She did not like the graphic comedy style then in vogue, and didn't like the lifestyle.[8][9]

Douglas got a job working for a well-known publicist, Peggy Siegal. Through this job, she tried to get her headshot to the casting director who worked with Martin Scorsese, but was not successful; however, Scorsese was editing his film Last Temptation of Christ down the hall from Siegal's offices. The editors needed a sound effect to convey Mary Magdalene screaming, and asked her to help out. Through this happenstance, Douglas met Scorsese, his editor, Thelma Schoonmaker, as well as filmmaker Michael Powell, and provided many ADR of crowd sounds. The group bonded over discussion of old films, which was a long-standing interest. Soon Scorsese and Douglas began a long-term relationship.[12]

Soon afterwards, she got her first movie role: a small part in the Scorsese segment of New York Stories.[13] Douglas said that Lorraine Bracco took Douglas under her wing during the shooting of Goodfellas, helping her find an agent. It was then that Douglas became Scorsese's girlfriend.[12]

Douglas appeared in Scorsese's Cape Fear (1991) - one of four Scorsese films in which she has appeared. After Cape Fear, she had several film roles where her segment was eventually cut, including in Household Saints, Jungle Fever, and Quiz Show. "It was kind of depressing," she commented.[12]

Douglas did a low-budget movie called Grief that got into Sundance, which led to her meeting director Allison Anders.[12]

Douglas had her first starring role as singer-songwriter Denise Waverly in Anders' 1996 film, Grace of My Heart.[14] and supporting roles in To Die For (1995) and Ghost World (2001).[15] Douglas, a huge music fan, was fascinated by the Brill Building-era and its personalities. Douglas drew parallels to the Connecticut of her youth and the many contradictions of her childhood and was based in a collaborative effort between herself and Anders that was very meaningful.[12]

Douglas said that when she worked on 1995's To Die For, the director Gus Van Sant taught her about the technical aspects of filmmaking, like camera blocking, film lenses, and modulating a performance for film.[12] It was also a movie where she felt that the Meisner technique she learned at the Neighborhood Playhouse started to connect for her.[8]

In 2016, Douglas appeared opposite Sean Astin in the independent feature film, Unleashed.[16]

On television, Douglas appeared in a memorable role as one of Garry Shandling's love interest towards the end of the series, The Larry Sanders Show, in 1998.[17] In 1999, she had a starring role opposite Jay Mohr in the series Action. She played a television executive who started out as a prostitute who had Mohr as a regular customer.[18]

She guest starred on Seinfeld, Frasier and The Drew Carey Show, and has played a public defender on several episodes of Law & Order: Special Victims Unit in 2002 and 2003. She appeared in two episodes of the HBO TV series Six Feet Under, both of which earned Emmy nominations for Guest Actress in a Drama. She appeared as Mrs. Ari's sister Marci in the Season 7 finale of Entourage.

In 2006, she starred in the Lifetime TV film Not Like Everyone Else and played herself in Pittsburgh opposite Jeff Goldblum. In 2007, Douglas was added to the cast of Ugly Betty, playing Sheila, an editor for MODE magazine.[19]

Douglas spent time in Sweden shooting a TV show called Welcome to Sweden, which is produced by Amy Poehler and stars Lena Olin and Will Ferrell. A co-Swedish/American production that will air on Swedish TV but will be sold on Netflix.[8]

Douglas has written and directed a comedy short The Perfect Woman (1993) (a satire about what men really want from women), the documentary Everybody Just Stay Calm—Stories in Independent Filmmaking (1994), and the satire Boy Crazy, Girl Crazier (1995). She has been the producer for several projects including Illeanarama, a collection of her short films for the Sundance Channel.

From 2008 to 2012, Douglas starred in a web series sponsored by IKEA called Easy to Assemble, where she plays herself as an actor-in-recovery-from-acting who goes to work at IKEA.[20] Douglas said that she has a great deal of autonomy from sponsor Ikea, whose only condition was that the show be suitable for children and families.[21] It was canceled after 4 seasons.[22][23]

In 2015, Douglas is producing and mentoring women filmmakers a web-series for Jill Soloway called The Skinny.[22]

Douglas worked on a Turner Classic Movies series called Friday Night Spotlight, a prime-time show featuring a month-long festival of movies programmed by special guests. The season that she worked on focused on the theme "Second Looks".[24] Douglas said that curating, writing, and working on this series allowed her to use her movie knowledge while making it funny, entertaining, and informative.[8]

In 2015, in association with the advocacy group, Women in Film, Douglas presented a month-long series on the TCM cable channel called "Trailblazing Women," an initiative to highlight women's contributions to the art of cinema. Douglas became involved in the project when she found out that the American Film Institute's list of 100 greatest American movies didn't include any movies directed by women.[25] The series was also in response to active discussions about the gender imbalance in Hollywood. The series will present work by female pioneers like Dorothy Arzner, Alice Guy-Blaché, Agnès Varda, Lina Wertmüller, as well as interviews with Allison Anders, Amy Heckerling, Julie Dash, and others.[26] The series will be a multi-year event, with the first year's focus on women directors from the 1920s to the present. Each night is themed, with programming topics from foreign films to African-American filmmakers.[27]

In 2015 Douglas published a memoir called I Blame Dennis Hopper which was released through Flatiron Books. In the memoir, Douglas tells about her life via her love for the movies and her exposure to Hollywood through her paternal grandfather Melvyn Douglas.[27] Not long after the book's release, she began a podcast with the same title.[32]

From 1989 until 1997, Douglas was the companion of director Martin Scorsese.[33] On 16 May 1998, she married producer and writer Jonathan Axelrod, the stepson of producer George Axelrod; they divorced in 2001.[33][34][35] Douglas said that the period after her divorce was difficult both emotionally and financially, and that she relocated from living in Los Angeles to the New York area, where she took classes at her former school, the Neighborhood Playhouse, and worked in theater. She also began writing and directing.[8]

Douglas is a vegetarian.[29] She was named after Princess Ileana of Romania.[15]

Report a problem
Write to Illeana Douglas at FanPal • 2021