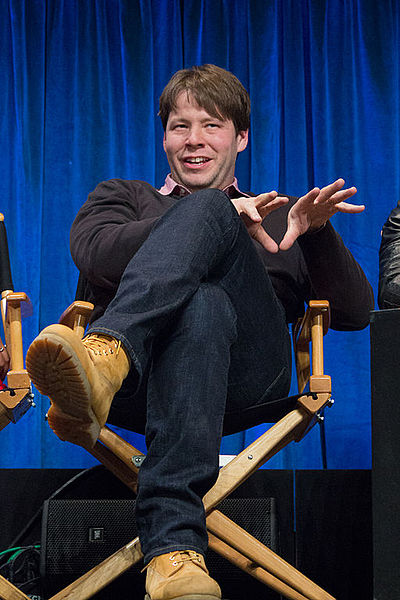 Barinholtz was born in the Rogers Park area of Chicago, Illinois, and was raised in its Lake View neighborhood,[1] the son of Peggy and Alan Barinholtz, an attorney.[2] Barinholtz has described his parents as "liberal people with great senses of humor," and has said that he was raised in a "very funny home."[3] Barinholtz is Jewish,[4] and attended Bernard Zell Anshe Emet Day School, before attending The Latin School of Chicago for high school. He had planned on becoming a politician,[3] but decided to move to Los Angeles, California, to be an actor instead. He worked at a telemarketing company and as a busboy before starting a career in comedy.[5]

Barinholtz also attended Boston University and after dropping out, he worked for the Chicago Transit Authority before starting his comedy career.[1] In a 2013 interview, he said he dropped out of school because he hated it and was doing poorly.[5]

In a 2012 phone interview, Barinholtz said he was inspired to pursue a career in comedy after attending a comedy show at The Vic Theatre and seeing several other comedians.[1] Afterwards, he started taking comedy classes at The Second City, ImprovOlympic and Annoyance Theatre, and was not successful at first, but chose to stick with it.[5] His younger brother Jon Barinholtz is also an actor and comedian.

Barinholtz spent two years in Amsterdam with the famed comedy troupe Boom Chicago, along with Jordan Peele, Josh Meyers and Nicole Parker. Barinholtz hosted the 'Worst of Boom Night' during a 10-year anniversary of the improv troupe Boom Chicago, where they performed their worst material from previous shows.

He has appeared in the films The Adventures of Big Handsome Guy and His Little Friend (2005), Love, Fear and Rabbits (2005) and Down (2001). Barinholtz currently lives in Los Angeles. Barinholtz is a founding member of The Lindbergh Babies, an improv group directed by Del Close, who worked with John Belushi, Bill Murray, Mike Myers and Chris Farley.

In 2012, Barinholtz joined the cast of the third season of the HBO series Eastbound & Down, playing the role of Ivan Dochenko, Kenny Powers' Russian rival.

He starred alongside Seth Rogen in the 2014 comedy Neighbors, as well as its 2016 sequel. Also in 2016, Barinholtz played prison guard Griggs in the DC Comics film Suicide Squad.

Barinholtz appeared in a regular role as nurse Morgan Tookers on the Hulu comedy series The Mindy Project. He was also a writer and story editor on the series. He also has a role in Friends from College, a Netflix original.

Barinholtz officially joined the cast of MADtv in 2002 as a feature performer for the eighth season. He was later promoted to a repertory performer status the following season. Barinholtz would often pair up with fellow cast member Josh Meyers in various sketches for the eighth and ninth seasons similar to the Mike Myers/Dana Carvey and Jimmy Fallon/Horatio Sanz duos on Saturday Night Live. Barinholtz also paired up with fellow cast member Bobby Lee in some of his sketches in the later seasons. Some of his famous characters included Abercrombie & Fitch model Dutch and Principal Lankenstein from the Coach Hines sketches.

In 2007, he decided not to renew his contract for the 13th season of MADtv. His contract, like most other MADtv cast members, was for five seasons which was up for renewal at the conclusion of the show's 12th season. Barinholtz has commented that he started getting "restless" and did not see eye to eye with some of the MADtv bosses about how decisions were being made.[5]

He has frequently worked with comedian Dave Stassen, with whom he also went to high school.[1] They co-wrote a SPIKE pilot in which Barinholtz also starred, Mega Winner,[8] and the 2016 film Central Intelligence.[9]

In 2012, Barinholtz began working as a writer on The Mindy Project and was cast as Nurse Morgan Tookers.

Barinholtz is married to Erica Hanson, with whom he has three daughters.[10][11]

Barinholtz was shooting his film Blockers when he suffered an accident during a fall stunt. The accident left him with two fractured cervical vertebrae in his neck.

Report a problem
Write to Ike Barinholtz at FanPal • 2021