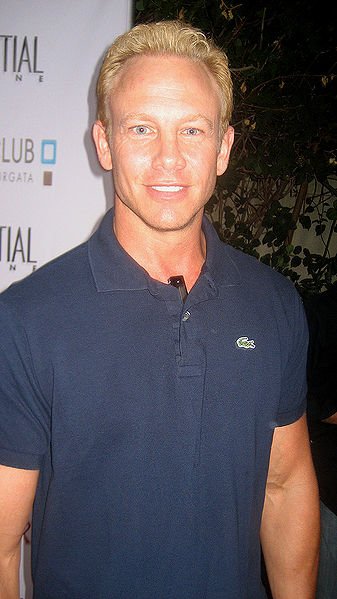 Ian Andrew Ziering (/ˈaɪən ˈzɪərɪŋ/; born March 30, 1964) is an American actor and voice actor best known for his role as Steve Sanders on the television series Beverly Hills, 90210, which he played from 1990 to 2000. He is also the voice of Vinnie on Biker Mice from Mars. Since 2013, he has starred as Fin Shepard in the Sharknado film series.

Ian Ziering was born in Newark, New Jersey, the son of Muriel and Paul M. Ziering, an educator and saxophonist.[1][2][3] He grew up in West Orange, New Jersey and has two older brothers, Jeff and Barry. Ziering was raised Jewish (his family is from Russia and Austria).[4][5] He graduated from West Orange High School in 1982, and from William Paterson University in 1988.[6]
Read more...

In 1990, Ziering was chosen as Steve Sanders on the hit series Beverly Hills, 90210. Sanders was a high school student and friend of Brandon Walsh, one of the series' other central characters. He is one of only four series regulars to appear on the show for its entire duration.

In 1998, Ziering was cast as the voice Dr. Niko "Nick" Tatopoulos in Godzilla: The Series, which was a direct follow-up to the 1998 Hollywood Godzilla re-imagining. Ziering replaced Matthew Broderick, who played Nick Tatopolous in the movie.[7]

He was a celebrity dancer on Season 4 of Dancing with the Stars.[8] His professional dance partner was Cheryl Burke, who won the competition in Season 2 with partner Drew Lachey and also Season 3 with partner Emmitt Smith. He made it to the semi-final round of Season 4, and received a perfect score (three 10s) from the judges for one of his two dances in the semi-finals. However, it was not enough to reach the finals: he and Cheryl were eliminated during the results show the next day, May 15, 2007. The experience of working with Ziering made Burke want to "slit her wrists" she said in 2016.[9] She later apologized, not to Ziering but for making a thoughtless reference to suicide. Ziering did not comment publicly on Burke's comments beyond re-tweeting a message from a different former co-worker that praised him as a great person to be around.

Ian has also appeared in the television series JAG, What I Like About You, The Doctors as Erich Aldrich and Guiding Light as Cameron Stewart. He also had a role in the videogame Freelancer as the protagonist, Edison Trent.

On June 18, 2007, Variety reported that Ziering had auditioned the previous week for the opportunity to succeed Bob Barker as host of The Price Is Right.[10] The job ultimately went to Drew Carey.[11] Ziering's ex-wife, Nikki, was a model on the show from 1999 to 2002.

In May, 2013, it was announced that Ziering would be performing with Chippendales as a celebrity guest star for four weeks at the Rio All Suite Hotel and Casino in Las Vegas.[12]

In 2015, he appeared on Celebrity Apprentice on NBC.

Ziering married Playboy model Nikki Schieler in July 1997. They filed for divorce in February 2002, citing irreconcilable differences.[14] Nikki has said that the separation was contentious, and that she was not given any support or help moving out.[15]

Dancing with the Stars season 4