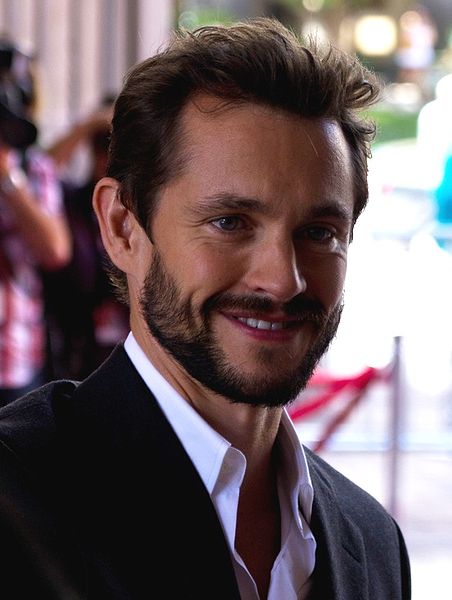 Hugh Michael Horace Dancy (born 19 June 1975) is a British actor. He is best known for his roles as troubled profiler Will Graham in the NBC television series Hannibal (2013-2015), Thomas Novachek in the stage play Venus in Fur (2011-2012), and as Adam Raki in the film Adam (2009). Dancy began his career with the title roles in the TV film David Copperfield (2000) and the miniseries Daniel Deronda (2002). He gained prominence as Prince Charmont in Ella Enchanted and Galahad in King Arthur (both 2004). His portrayal of courtier Robert Devereux, 2nd Earl of Essex in the Channel 4 miniseries Elizabeth I (2005) earned him a Primetime Emmy Award nomination. From 2016 to 2018, he played Cal Roberts in the Hulu original series The Path.

He is married to American actress Claire Danes, with whom he has two children.

Dancy was born in Stoke-on-Trent, Staffordshire,[1] and raised in Newcastle-under-Lyme.[2] His mother, Sarah Ann Dancy (née Birley) (b. 1952),[3] works in academic publishing.[2] His father is philosophy professor Jonathan Dancy (born 8 May 1946), who teaches at the University of Reading and at the University of Texas at Austin.[3][4]

Hugh is the oldest of three children, followed by brother Jack Dancy (born 25 May 1977), who is co-director of the travel company Trufflepig Travel,[3][5] and sister Katharine Sarah Redman (née Dancy, born 5 March 1980). From the age of 5 to the age of 10, Dancy was educated at Edenhurst Preparatory School[6] in Newcastle-under-Lyme. At age 10, Dancy attended boarding school at the Dragon School in Oxford, then, at 13[1] at Winchester College.[2] At age 18, he acted in the Winchester College Players production of Twelfth Night, which was performed in both Winchester and at the Minack Theatre in Cornwall. He went on to study English under poet and playwright Francis Warner at St Peter's College, Oxford.[1]

After graduation, Dancy moved to London, where a chance conversation in a cafe led to his meeting casting director Ros Hubbard and agent Dallas Smith, who signed him.[1] In 1999, Dancy played the role of Danny, who had a fleeting romance with Rachel, one of the show's main characters, in the second series of Cold Feet. In 2002, Dancy played Daniel Deronda in the BBC's adaptation of George Eliot's novel Daniel Deronda.[7]

Notable roles from film include Dancy's Prince Charmont from the 2004 Disney film Ella Enchanted alongside Anne Hathaway and, from the same year, Galahad in King Arthur alongside later Hannibal co-star Mads Mikkelsen.[8] In 2005, he starred as Adam Raki in Adam, an independent film which premiered at the Sundance Film Festival in 2009 and follows the story of a young man with an autism spectrum disorder.[9] He went on to appear in various other films.

In theatre, Dancy has appeared in MCC Theater's The Pride, written by Alexi Kaye Campbell, at the Lucille Lortel Theatre in New York City. The off-Broadway production was directed by Joe Mantello and co-starred Ben Whishaw and Andrea Riseborough. In 2007, Dancy had a starring role on Broadway as Captain Dennis Stanhope in Journey's End (Belasco Theatre). From 2010 until 2011, he starred in Manhattan Theatre Club's Broadway production of Venus in Fur alongside Nina Arianda. His performance was praised by The New York Times theatre critic Charles Isherwood.[10] In August 2018, it was announced he would appear with Stockard Channing in Roundabout Theatre Company's off-Broadway premiere of Apologia, written by Alexi Kay Campbell, in the dual roles of Peter and Simon.[11]

In March 2012, NBC announced that Dancy had been cast as Will Graham in Hannibal, the television adaptation based on the main character of Thomas Harris' 1981 novel Red Dragon.[12] The show received critical acclaim and was nominated for numerous awards. It was cancelled after three seasons and concluded in 2015, though there are hopes for its revival.[13] For three seasons, he appeared as Cal Roberts, a lead character in Hulu's The Path, alongside Aaron Paul and Michelle Monaghan.[14][15]

Dancy met American actress Claire Danes on the set of Evening in Newport, Rhode Island, and they began dating.[16] In February 2009, they announced their engagement.[16] The couple married in France in 2009 in a secret ceremony.[17] They have two children together, Cyrus Michael Christopher Dancy (born December 17, 2012),[18] and a second son, born on August 27, 2018.[19]

They live in the West Village neighborhood of New York City.[20]

Report a problem
Write to Hugh Dancy at FanPal • 2021