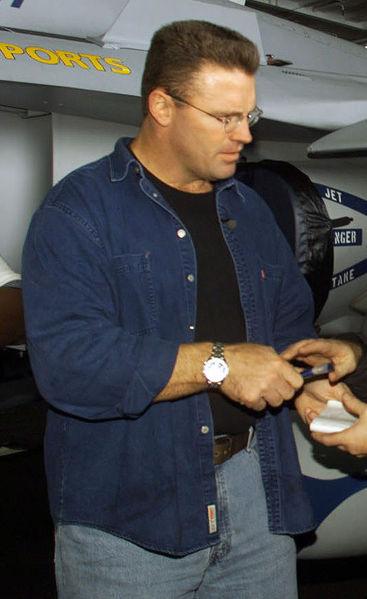 Howard Matthew Moses Long (born January 6, 1960) is an American former National Football League (NFL) defensive end, actor and current sports analyst. He played in the NFL for 13 seasons and spent his entire career with the Raiders franchise. Long is mostly remembered for his tenure with the Los Angeles Raiders (1982-1993) as he only played for the Raiders in Oakland during his rookie campaign, the team's last year in Oakland in 1981, before returning in 1995. During his tenure as a player, Long was named to eight Pro Bowls and helped the Los Angeles Raiders win a championship in Super Bowl XVIII in 1984. He was inducted into the Pro Football Hall of Fame in 2000.

After retiring, Long pursued a career in acting and broadcasting. He currently serves as a studio analyst for Fox Sports' NFL coverage.

Long was born in Somerville, Massachusetts and was raised in Charlestown, Boston.[1]

Long played college football and earned a degree in communications at Villanova University. He was a four-year letterman at Villanova and was selected to play in the Blue-Gray Football Classic and was named the MVP in 1980. As a freshman, Long started every game and had 99 tackles. As a sophomore, Long led Villanova in sacks with five and recorded 78 tackles. The next season, 1979, Long sustained a thigh injury, missed three games, and ended the season with 46 tackles. As a senior, Long again led the Wildcats with four sacks and had 84 tackles. He began as a tight end but was moved to the defensive line playing mostly noseguard his first two seasons. After moving to defensive end, he earned All-East honors and honorable mention All-American by his senior year.[2] Long also boxed at Villanova and was the Northern Collegiate Heavyweight Boxing Champion.[citation needed]

Selected in the second round of the 1981 NFL Draft by the Oakland Raiders, Long would play 13 seasons for the club, wearing the number 75. On the Raiders defensive line, Long earned eight Pro Bowl selections.

Long collected 91½ sacks during his career (7½ are not official, as sacks were not an official statistic during his rookie year).[5] His career high was in 1983 with 13 sacks, including a career-high five against the Washington Redskins on October 2, 1983. He also intercepted two passes and recovered ten fumbles during his 13-year career. At the time of his retirement, he was the last player still with the team who had been a Raider before the franchise moved to Los Angeles. He won the Super Bowl XVIII title as the left defensive end with the Raiders (1983 season), beating the Washington Redskins, as he outplayed the opposing offensive tackle, George Starke; the vaunted Redskin running game led by John Riggins had only 90 yards in 32 rush attempts.

Pro Football Weekly (PFW) named Long as one of the ends on its All-time 3-4 defensive front, along with Lee Roy Selmon, Curley Culp, Lawrence Taylor, Andre Tippett, Randy Gradishar, and Harry Carson. PFW based its "Ultimate 3-4" team on the vote of over 40 former NFL players, coaches, and scouts.[6]

After his retirement from the NFL following the 1993 season, Long pursued an acting career, focused mainly on action films—including Firestorm, a 1998 feature in which he starred. He also appeared as a co-star in the suspense movie Broken Arrow, alongside star John Travolta. He played a minor role in the movie 3000 Miles to Graceland alongside Kevin Costner, Kurt Russell and Courteney Cox. In That Thing You Do!, Long appears as Mr. White's (Tom Hanks) "partner" Lloyd in the extended cut of the movie, released on DVD in 2007. Long's part was entirely cut from the theatrical release.[7]

Long also made numerous cameo appearances on TV shows and commercials. Long was a spokesman for Radio Shack, making commercials with actress Teri Hatcher. He has also been featured in many other national commercials and advertising campaigns including those of Coors Light, Nike, Campbell's Chunky Soup, Hanes, Frito Lay, Coca-Cola and Pepsi, Pizza Hut, Taco Bell, Nabisco, Kraft, the Bud Bowl campaign, Honda and currently for Chevrolet.

In March 1986, Long told Inside Sports, "When I'm finished playing, I'd like to stay in touch with football, through broadcasting. I'm qualified to give a certain perspective and I'm articulate enough to handle it."[8] After his retirement, he began as a studio analyst for the Fox Network's NFL coverage where he often plays the "straight man" to the comic antics of co-host Terry Bradshaw and he writes a column for Foxsports.com.[9] In addition, he hosts an annual award show on Fox, Howie Long's Tough Guys, which honors the NFL players whom he deems the toughest and gives "the toughest" a Chevrolet truck. Long won a Sports Emmy Award in 1997 as "Outstanding Sports Personality/Analyst."[10]

He is also the author of Football for Dummies, a book to help average fans understand the basics of professional football; it is part of the For Dummies series by Wiley Publishing. He is an alumnus of, and volunteers his time for, the Boys and Girls Clubs of America. He was named Walter Camp Man of the Year in 2001 by the Walter Camp Foundation.

Long married Diane Addonizio in 1982, and has three sons. His eldest, Chris is a defensive end for the Philadelphia Eagles. His middle, Kyle is a guard for the Chicago Bears.[11] His youngest, Howie Jr., works in player personnel for the Raiders.[12] Long is a Roman Catholic.[13]