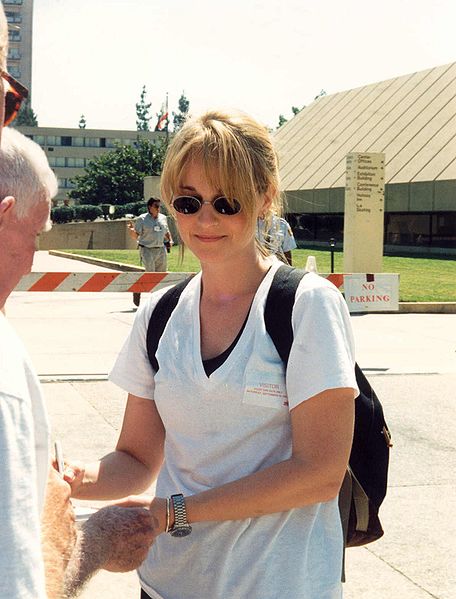 Helen Elizabeth Hunt (born June 15, 1963) is an American actress, director, and screenwriter. She is best known for starring as Jamie Buchman in the sitcom Mad About You (1992-1999), for which she won four Primetime Emmy Awards for Outstanding Lead Actress in a Comedy Series, and for starring as Carol Connelly in the romantic comedy film As Good as It Gets (1997), for which she won the Academy Award for Best Actress.

Hunt's other notable films include Twister (1996), Cast Away (2000), What Women Want (2000), Pay It Forward (2000), and The Sessions (2012). Hunt's performance in The Sessions garnered her an Academy Award nomination for Best Supporting Actress. She made her directorial debut with the comedy-drama film Then She Found Me (2007). Hunt has also won four Golden Globe Awards and two Screen Actors Guild Awards.

Helen Hunt was born in Culver City, California. Her mother, Jane Elizabeth (née Novis), worked as a photographer, and her father, Gordon Hunt, was a film, voice and stage director and acting coach.[1] Her uncle, Peter H. Hunt, is also a director. Her maternal grandmother, Dorothy (Anderson) Fries, was a voice coach.[2] Hunt's paternal grandmother was from a German-Jewish family, while Hunt's other grandparents were of English descent (her maternal grandfather was born in England), with a Methodist religious background.[3][4][5][6] When she was three, Hunt's family moved to New York City, where her father directed theatre and Hunt attended plays as a child several times a week.[7] Hunt studied ballet, and briefly attended UCLA.[7][8][9]
Read more...

Hunt began working as a child actress in the 1970s.[7] Her early roles included an appearance as Murray Slaughter's daughter on The Mary Tyler Moore Show, alongside Lindsay Wagner in an episode of The Bionic Woman, an appearance in an episode of Ark II called "Omega", and a regular role in the television series The Swiss Family Robinson.[7] She appeared as a marijuana-smoking classmate on an episode of The Facts of Life. Hunt also played a young woman who, while on PCP, jumps out of a second-story window, in a 1982 TV movie called Desperate Lives (a scene which she mocked during a Saturday Night Live monologue in 1994).[10] That same year, Hunt was cast on the ABC sitcom It Takes Two, which lasted a single season. She played Jennie in the 1983 television movie Bill: On His Own, co-starring Mickey Rooney and, later that year, was cast in the lead role of Tami Maida in the fact-based TV movie Quarterback Princess. In the mid-1980s, she had a recurring role on St. Elsewhere as Clancy Williams, the girlfriend of Dr. Jack "Boomer" Morrison, and had a notable guest appearance as a cancer-stricken mother-to-be in a two-part episode of Highway to Heaven. Feature film roles around this time included Girls Just Want to Have Fun (1985) with Sarah Jessica Parker and Shannen Doherty, Peggy Sue Got Married (1986) as Kathleen Turner's daughter, Project X (1987) with Matthew Broderick, and Stealing Home (1988) as Hope Wyatt, the sister of Billy Wyatt, played by Mark Harmon and a cast featuring Jodie Foster and Harold Ramis, and Next of Kin (1989) with Patrick Swayze and Liam Neeson.

In the 1990s, after playing the lead female role in the short-lived My Life and Times, Hunt starred in the series Mad About You, winning Emmy Awards for her performances in 1996, 1997, 1998, and 1999.[7] For the last year of the show she and Paul Reiser became the first actors ever to be paid $1,000,000 per episode.[citation needed] Hunt directed several episodes of Mad About You, including the series finale. Her big-screen directorial debut came with the film Then She Found Me, in which she also starred, with Colin Firth and Matthew Broderick.[1] She played the love interest of Moe Szyslak on The Simpsons episode Dumbbell Indemnity. She starred with Bill Paxton in the 1996 disaster action film Twister, which was the second-highest-grossing film of the year. In 1998, Hunt won an Academy Award for Best Actress for her role in the movie As Good as It Gets of a waitress and single mother who finds herself falling in love with a misanthropic obsessive-compulsive romance novelist played by Jack Nicholson.[7] After winning the Academy Award, she took time off from movie work to play Viola in Shakespeare's Twelfth Night, at Lincoln Center in New York.[11] In 2000, Hunt starred in four films: Dr. T & the Women, with Richard Gere; Pay It Forward, with Kevin Spacey and Haley Joel Osment; What Women Want, with Mel Gibson; and Cast Away, with Tom Hanks.[7] In 2003, she returned to Broadway in Yasmina Reza's Life x 3.[11] In 2006, Hunt appeared in the ensemble cast film Bobby alongside Demi Moore, Anthony Hopkins, Sharon Stone and William H. Macy. In 2011, in the movie Soul Surfer, she played the mother of the Hawaiian-born champion surfer Bethany Hamilton, on whose life the movie was based.

In 2012, she starred alongside John Hawkes and William H. Macy in The Sessions as sex surrogate Cheryl Cohen-Greene. The movie and her performance were very well reviewed and earned her several award nominations, including an Oscar nomination for Best Supporting Actress. The movie also gained two awards at the Sundance Film Festival. The role required Hunt to perform multiple scenes of full-frontal nudity. Hunt further said: ""Being naked was challenging, but even more than that was the vulnerability. I felt vulnerable because I was naked. I felt vulnerable because we were having such a vulnerable moment in this character's life. This was a real journey that someone had gone on, and I wanted to do right by that."[12]

Hunt has been recognized extensively in her career. In 1998 she won a Golden Globe Award, an Academy Award and an Emmy Award. Hunt was nominated for a Primetime Emmy Award for Outstanding Lead Actress in a Comedy Series seven years in a row, from 1993 through 1999, winning in the last four years.[17]

Report a problem
Write to Helen Hunt at FanPal • 2021