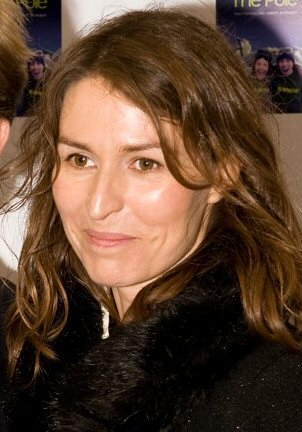 Helen Victoria Baxendale (born 7 June 1970) is an English actress of stage and television, known for her roles as Rachel in the British comedy-drama Cold Feet (1997-2003), and Emily in the American sitcom Friends (1997-98).

Baxendale's early stage credits include The Soldiers at Glasgow's Citizens Theatre, which earned her a 1993 Ian Charleson Award nomination. Her other television credits include Cardiac Arrest (1994-96), An Unsuitable Job for a Woman (1997-2001), Adrian Mole: The Cappuccino Years (2001), and Cuckoo (2012-present).

Baxendale was born on 7 June 1970 in Pontefract,[1] West Riding of Yorkshire.[2][3] Her sister is the screenwriter Katie Baxendale.

She grew up in Shenstone, Staffordshire and attended King Edward VI School, Lichfield. She wanted to be a ballet dancer when she was younger. She trained at the Elmhurst School for Dance but dropped out at 17 in favour of an acting career. She moved to the Bristol Old Vic Theatre School, and then worked at the Glasgow Citizens' Theatre from 1992-1995.

It was via Glasgow Citizens' Theatre that she was cast in the hospital TV series Cardiac Arrest (although it was not her first television role). Her role as Dr. Claire Maitland earned her a Scottish BAFTA nomination in 1995.

She was one of the stars of the popular TV series Cold Feet, playing Rachel Bradley, a role which garnered her a British Comedy Award nomination in 1997 in the pilot episode. She also starred in An Unsuitable Job for a Woman, playing Cordelia Gray, and made notable recurring appearances on the American series Friends as Ross Geller's girlfriend, wife and finally ex-wife Emily Waltham, which gave her wide exposure on American network television. Other notable roles include Lorna Johnson in Truth or Dare (in which John Hannah also starred), Caroline Meagher in The Investigator (alongside Laura Fraser), and Julie Matthews in Curt Truninger's Dead by Monday.

She was nominated for another Scottish BAFTA in 1997 for her role as Lorna Johnson. Dead by Monday won the Angel Award for Best Film at the Monaco International Film Festival in 2003 and the Portland Festival of World Cinema award for best feature film in 2001.

On-stage, Baxendale starred as Christine in Patrick Marber's After Miss Julie, and in 2005 appeared as Romy, the eponymous title role in The Woman Before at the Royal Court alongside Nigel Lindsay, Saskia Reeves, Tom Riley and Georgia Taylor but has also played various roles including that of Ophelia in Hamlet (the Marovitz Hamlet) along with Henry Ian Cusick. For her 1993 performance in Soldiers at the Glasgow Citizens Theatre, she was nominated for an Ian Charleson Award (best classical actor under 30).[4] In 2009 Baxendale played Lara in Amongst Friends alongside Aden Gillett and Emma Cunniffe at Hampstead Theatre.[5]

She played Pandora Braithwaite in Adrian Mole: the Cappuccino Years in 2001 and "Maggie" in the multiple award-winning Bolse Vita. She also appeared in Saving Nellie, a physics programme running on Teachers TV. In 2007 to January 2008 she starred in Swimming with Sharks alongside Christian Slater at London's Vaudeville Theatre.[2] In 2008 and 2009 she has also appeared in several TV adverts for Morrisons, a British supermarket chain.[6]

In January 2011, she co-starred with Trevor Eve in the three-part ITV drama Kidnap and Ransom, filmed on location in South Africa.[7] Later in the same year, she starred as DCI Marion Bettany in Val McDermid's radio crime drama Village SOS.[8]

In 2010 Helen Baxendale appeared in the pilot episode of Dirk Gently as Susan Harmison. In 2012 she reprised her role in the second episode of the commissioned first and only series. She then appeared in the Inspector George Gently episode "The Lost Child" alongside Mark Gatiss.

She currently stars in Cuckoo as Lorna, the mother in-law of the titular Dale 'Cuckoo' Ashbrick.

Baxendale has been with her boyfriend David L. Williams since her Glasgow days and together they have three children.[9] Her first pregnancy was written into An Unsuitable Job for a Woman and her second was written into the fourth series of Cold Feet.[9]

Her first pregnancy (coupled with the fact that her country of residence was Britain, rather than the USA) meant that her character was written out of Friends earlier than the writers had originally intended. Baxendale appeared in only 14 episodes, despite her character dating, marrying, and then divorcing Ross Geller (David Schwimmer), one of the show's main characters.[9][10]