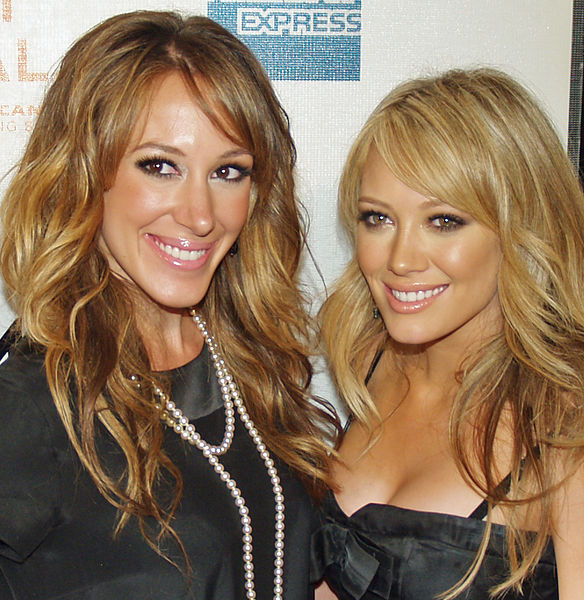 Haylie Katherine Duff (born February 19, 1985)[1] is an American actress, singer, songwriter, television host, writer, and fashion designer.[2] She is best known for her role as Sandy Jameson in the television series 7th Heaven, Amy Sanders in Lizzie McGuire, Summer Wheatley in Napoleon Dynamite, and Annie Nelson in the made-for-television films Love Takes Wing along with its sequel Love Finds a Home. She is also the older sister of American singer and actress Hilary Duff.

The older sister and former castmate of Lizzie McGuire star Hilary Duff, Haylie Duff was born in Houston, Texas.[3] Duff's mother, Susan Colleen Duff (née Cobb) is a film producer who was a co-executive producer of A Cinderella Story (2004), a producer of The Perfect Man (2005) and Material Girls (2006), and the manager of Hilary; she was previously a homemaker. Her father, Robert Erhard "Bob" Duff, a partner and owner in a chain of convenience stores with his father, John B. Duff, resides at the family home in Houston to maintain the family's business. She began her acting career as an offshoot of her early dance training. Growing up in Texas, Duff began ballet at an early age. By the age of eight, Duff landed a role in the Houston Metropolitan Dance Company's production of The Nutcracker Suite.[4]
Read more...

Duff in the cast of Hairspray performing "Mama, I'm a Big Girl Now" during a street performance of the song

Duff's early career started by making guest appearances on made-for-television films such as True Women and on TV series such as The Amanda Show. In addition to guest-starring roles on Chicago Hope, Boston Public, and Third Watch, Duff became a familiar face starting in late 2002 as Amy Sanders on Lizzie McGuire. In 2004, Duff made a guest appearances on That's So Raven as Katina Jones. After making guest appearances on television, Duff received her first role in a feature film when she was cast as Summer Wheatley in Napoleon Dynamite. The film earned her first Teen Choice Award win. She continued making guest appearances, which include Joan of Arcadia and American Dreams. She also lent her voice talent to the Christmas animation film In Search of Santa which again, featured sister Hilary. In 2005, Duff joined the cast of the television series 7th Heaven, playing Sandy Jameson, best friend to Simon's girlfriend Rose.

Duff has also starred in Material Girls with sister Hilary, where she is credited as co-producer, with her mother and sister credited as producers. Following Material Girls, Duff appeared in various made-for-television or straight-to-DVD films including Nightmare, My Sexiest Year, Pretty Little Devils, Backwoods, Love Takes Wing, Love Finds a Home and My Nanny's Secret.

Between 2008 and 2015, Duff appeared in various films and TV roles, including; Fear Island, Tug and Slightly Single in L.A.. She lent her voice to the animated film Foodfight!, but due to distribution issues, the film was delayed for years until it finally saw a release in 2012. Duff hosted the reality show Legally Blonde: The Musical - The Search for Elle Woods, which searched for an actress to take over the lead role in Legally Blonde: The Musical where she had been in the chorus.[6] She was also listed as an executive producer of the series. Duff's most recent project was the film Badge of Honor in 2015.[7]

Duff has recorded numerous singles for various soundtracks with her sister, with most of them appearing on the Disneymania discs. Notable soundtracks include: In Search of Santa, The Lizzie McGuire Movie, A Cinderella Story, and Material Girls. She was featured on rapper Kool G Rap's album Half a Klip, providing the background vocals on the track "On the Rise Again" produced by DJ Premier. Duff also sang "A Whatever Life" for the Stuck in the Suburbs soundtrack and "Sweetest Pain" for the Raising Helen soundtrack. She is also featured on song "Babysitting Is a Bum Deal" on the album Family Guy: Live in Las Vegas, singing a duet with Seth MacFarlane as his character Stewie. In addition to singing, Duff has also written and co-written several songs for her sister Hilary's first two studio albums, Metamorphosis and her self titled second album.

In April 2014, Duff announced her engagement to Matt Rosenberg after one-and-a-half years of dating[10] and gave birth to their daughter, Ryan Ava Erhard, on May 11, 2015.[11] On January 5, 2018, Duff announced via her Instagram account that she and Rosenberg were expecting their second child. A month later, she revealed she was having another girl.[12][13] She gave birth to their second daughter, Lulu Gray, on June 5, 2018.[14]