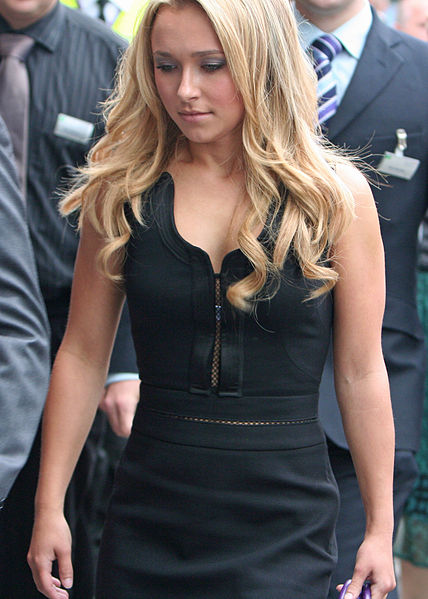 A native of New York, she first appeared in a commercial at the age of 11 months. She started a full-time acting career began by playing Sarah Roberts on One Life to Live (1994-1997) and Lizzie Spaulding on Guiding Light (1996-2000), and then played Sheryl Yoast in the Disney feature film Remember the Titans at 10 years old. Other roles include her portrayal of the title character in the true crime drama Amanda Knox: Murder on Trial in Italy, Kairi in the Kingdom Hearts series, and Kirby Reed in the slasher film Scream 4. She received two nominations for the Golden Globe Award for Best Supporting Actress - Series, Miniseries or Television Film, for her work on Nashville in 2012 and 2013.[4]

Panettiere was born in and partly raised in Palisades, New York. She is the daughter of Lesley R. Vogel, a former soap opera actress, and Alan Lee "Skip" Panettiere, a fire captain. She has Italian, with some English and German, ancestry. She has one younger brother, fellow actor Jansen Panettiere.[5][6][7] Her mother's family lives in Indiana.[8][9]

After Panettiere attended South Orangetown Middle School in New York, she was homeschooled[10] and had private tutors from grade nine to the completion of high school to accommodate her acting schedule.

Panettiere first appeared in commercials at the age of eleven months, beginning with an advertisement for a Playskool toy train.[11] She landed a role as Sarah Roberts on the ABC soap opera One Life to Live from 1994 to 1997, which was followed by Lizzie Spaulding on the CBS soap opera Guiding Light in 1996, and again from 1997 to 2000. While on Guiding Light, Panettiere's character Lizzie battled leukemia. The Leukemia & Lymphoma Society gave her its Special Recognition Award for drawing the attention of daytime viewers to the disease, and for improving national awareness.

For her performance in Lifetime Television's 1999 TV movie If You Believe, she was nominated for the Young Artist Award for Young Actress Age Ten or Under in the category of Best Performance in a TV Movie or Pilot.[12] Panettiere appeared on Fox's Ally McBeal as the title character's daughter, played the daughter of a man transitioning to female in HBO Films' Normal, had a recurring guest role on Malcolm in the Middle and guest starred in Law & Order: Special Victims Unit in two different roles. In 2004, Panettiere had her first starring role in the Disney Channel film Tiger Cruise.

Charles Esten, Connie Britton and Panettiere at the PaleyFest 2013 panel on the TV show Nashville

Panettiere became most prominent as Claire Bennet in the NBC series Heroes, which was created by Tim Kring, as a high school cheerleader with regenerative healing powers. Thanks to her role on Heroes, she became a regular on the science fiction convention circuit, invited to attend conventions around the world in 2007, including Gen Con, New York Comic Con, and Fan Expo Canada. Panettiere has complained that her acting options are sometimes limited because "people look at as either the popular cheerleader type or just the blonde".[13]

In early 2007, Panettiere appeared on the MTV show, Punk'd. The appearance was engineered by her mother and involved a male "fan" discussing her work with her, instigating a jealous reaction from the man's spouse. In April 2012, she hosted an episode of the new series.

In March 2012, it was announced Panettiere had been cast opposite Connie Britton on the ABC musical drama series Nashville, where she portrayed Juliette Barnes.[14][15][16] The show reunited Panettiere with Burgess Jenkins (who appears in the first few episodes) from Remember the Titans. The show moved from ABC to CMT and Hulu for its fifth and sixth seasons.

Panettiere made her feature film debut with 1998's A Bug's Life,[17] but her first released film was the same year's The Object of My Affection, in which she appears briefly as a mermaid in the school play in the opening scene. In 1999, she portrayed the girl on a sinking sailboat in Message In A Bottle. She played the role of Coach Yoast's daughter, Sheryl, in the 2000 Disney film Remember the Titans. In 2004, she played Kate Hudson's title character's adolescent niece in Raising Helen. In 2005, she was the title character's rival in a skating contest in Ice Princess. In the same year she played the main (human) role in the film Racing Stripes as budding jockey Channing Walsh. She subsequently starred in 2006's Bring It On: All or Nothing as a cheerleader and had a supporting role as Adelaide Bourbon in the 2007 independent film Shanghai Kiss.

In June 2007, she signed with the William Morris Agency, after previously being represented by the United Talent Agency.[18] Forbes estimated that she earned $2 million in 2007.[19]

In July 2009, Panettiere starred in the teen comedy I Love You, Beth Cooper. In September 2010, she starred as Amanda Knox in the controversial Amanda Knox: Murder on Trial in Italy.[22] Panettiere also provided the voice of Kate in 2010's Alpha and Omega.[23]

In April 2011, Panettiere appeared in the Scream sequel, Scream 4, playing Kirby Reed. The film received mixed reviews, but she received acclaim for her role and was considered to be a highlight. The same year she replaced Anne Hathaway as the voice of Red for the animated sequel Hoodwinked Too! Hood vs. Evil. In 2012, The Forger, in which she played the role of Amber, was released direct to DVD (both this and Hoodwinked Too! Hood vs. Evil were made in 2009).

In April 2015, Panettiere joined the cast of Custody,[24] alongside Viola Davis, whom she appeared with in 2006's The Architect.

She voiced and modeled the character of Sam in Until Dawn, which was released on PlayStation 4 on August 25, 2015.[26]

Panettiere's first single not associated with an acting role, "Wake Up Call", was digitally released on August 5, 2008. The clothing brand Candie's announced that it was premiering an ad campaign for the single in late July. Candie's provided additional promotion for the single with a television advertisement and a music video.[28] Sebastian Stan, who portrayed the brother of Panettiere's character in The Architect, played her boyfriend in the video.

She has recorded several songs for Nashville, which were released as singles and included on the show's soundtrack albums. She also made numerous concert appearances associated with the show's touring promotion. In 2013, Panettiere recorded a version of "The Fabric of My Life" for a Cotton Incorporated campaign.[29]

In late 2006, Neutrogena made Panettiere the cover girl for their new worldwide ad campaign;[30] following in the footsteps of actresses Kristin Kreuk, Josie Bissett, Jennifer Love Hewitt, Mandy Moore, Mischa Barton, Gabrielle Union and Jennifer Freeman. In September 2007, Panettiere appeared in a Heroes-themed Got Milk? ad for which the photographs were shot by Annie Leibovitz.[31] In February 2008, Kohl's announced that Panettiere would be their next Candie's spokesperson.[32] From 2007 to 2008, Panettiere designed limited edition hand bags for Dooney & Bourke and modeled their bags in magazine ads [33][34][35]

In 2009, Panettiere was one of the celebrities featured in the coffee table book Room 23,[36] produced by Diana Jenkins and photographed by Deborah Anderson.[37]

Panettiere with her Heroes co-star Milo Ventimiglia in 2008

She met then-world heavyweight boxing champion Wladimir Klitschko in 2009 at the book launch party for mutual acquaintance Diana Jenkins' Room 23 (both appeared in the book), and they soon began dating.[40] Panettiere was ringside for Klitschko's knockout victory over Samuel Peter on September 11, 2010.[41] In May 2011, she announced that they had split. Both cited the long-distance nature of their relationship as the reason, and said they would remain close friends.[42] Panettiere confirmed reports that she and Klitschko had resumed their romantic relationship in an April 2013 interview.[40] In October 2013, she announced her engagement to Klitschko.[43][44] In December 2014, Panettiere gave birth to their daughter.[45] In August 2018, Panettiere's mother confirmed the couple had broken up again, remaining on friendly terms.[46]

Panettiere followed a vegetarian diet while she starred in Heroes but has since added chicken and fish to her diet, stating that she "didn't respond well" to a vegetarian diet, and she had "low energy".[47][48][49]

In 2015, she stated that following the birth of her daughter she experienced post-partum depression. In her September 28 appearance on Live with Kelly and Michael, she said that it's "scary and needs to be talked about".[50][51] In October, Panettiere voluntarily checked into a facility for treatment, causing her to miss filming for a few episodes of Nashville.[52] She returned to treatment in May 2016.[53]

In 2007, Panettiere became an official supporter of Ronald McDonald House Charities and is a member of their celebrity board, called the Friends of RMHC.[54]

On October 31, 2007, Panettiere joined with The Whaleman Foundation to try to disrupt the annual dolphin hunt in Taiji, Wakayama, Japan. She was involved in a confrontation between Japanese fishermen and five other surfers of the group from Australia and the United States (including former Home and Away star Isabel Lucas). The confrontation lasted more than 10 minutes before the surfers were forced to return to the beach, after which they left the country.[55] Parts of the confrontation can be seen on the award-winning Sundance Film Festival documentary film The Cove. The fishermen consider the condemnation as an attack on their culture.[56]

In November 2007, she was awarded the "Compassion in Action Award" from the animal rights group PETA for her efforts to stop the dolphin hunt in Japan.[57]

On January 28, 2008, Panettiere handed a letter of protest to the Norwegian ambassador in the U.S. arguing that Norway should stop its hunt for whales. She also delivered a letter to the Japanese ambassador calling for the end of Japan's hunting of whales. At a 2007 Greenpeace event in Anchorage, Alaska, Panettiere defended aboriginal whaling, saying that there is a difference between commercial whaling and the whaling practiced by aboriginal tribes in the U.S.[58]

In May 2008, Panettiere was involved in an eBay auction to benefit Save the Whales Again, a campaign of The Whaleman Foundation. The auction included tickets to a fundraising dinner hosted at the Hollywood restaurant Beso, owned by Eva Longoria, and a whale watching tour, with Panettiere, off the coast of Santa Barbara.[59] The same month, during an interview with Teen Vogue, she explained how her fame gives her a platform for her activism: "The show put me in a place to speak for things that I'm passionate about."[60]

In September 2008, Panettiere launched her own line of calfskin leather bags for the company Dooney & Bourke.[61] In October, she delved into the presidential election, releasing a satirical public service announcement through the website Funny or Die. In this video, Panettiere mocked Republican candidate John McCain for his age and temper.[62] She subsequently made clear her intention to vote for Barack Obama and urged other young people to vote.[63]

Panettiere also appeared in a public service announcement with DC Shadow Senator Paul Strauss endorsing voting rights for the District of Columbia.[64] She is also a teen ambassador for the Candie's Foundation, whose mission is to prevent teen pregnancy. On May 6, 2009, she participated in a town hall meeting in New York City alongside Bristol Palin and Major League Baseball pitcher Matt Garza on the issue of teen pregnancy.[65]

On December 6, 2013, Panettiere and her then-fiancé Wladimir Klitschko visited the Euromaidan-protests in Kiev, Ukraine.[66] Wladimir's brother Vitali was one of the leading figures of these protests.[67][68] She and her fiancé addressed the crowds.[69]