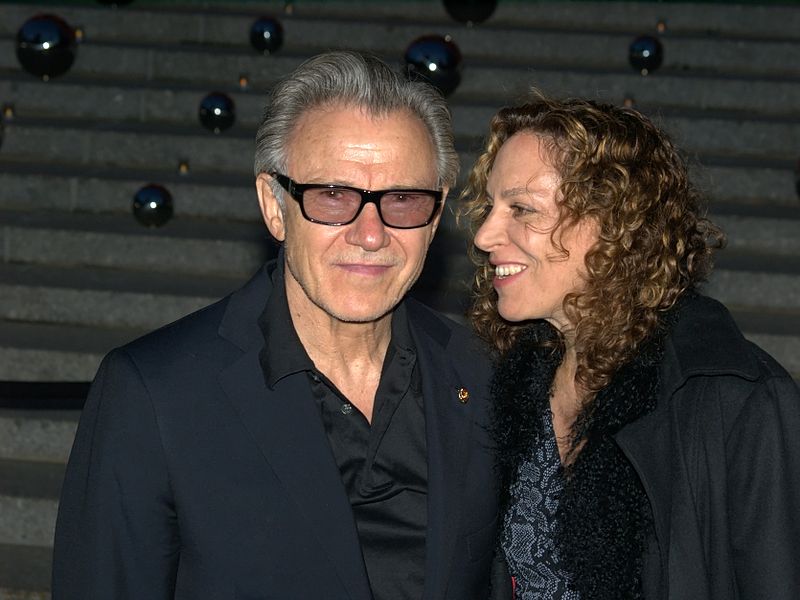 Keitel was born in the New York City borough of Brooklyn, the son of Miriam (née Klein) and Harry Keitel, who were Jewish emigrants from Romania and Poland, respectively.[3] His parents owned and ran a luncheonette and his father also worked as a hat maker.

Keitel grew up in the Brighton Beach section of Brooklyn,[4] with his sister, Renee, and brother, Jerry. He attended Abraham Lincoln High School. At the age of sixteen, he decided to join the United States Marine Corps,[4] a decision that took him to Lebanon, during Operation Blue Bat. After his return to the United States, he was a court reporter for several years and was able to support himself before beginning his acting career.[4]

Keitel studied under both Stella Adler and Lee Strasberg and at the HB Studio, eventually landing roles in some Off-Broadway productions.[4] During this time, Keitel auditioned for filmmaker Martin Scorsese and gained a starring role as "J.R.", in Scorsese's first feature film, Who's That Knocking at My Door (1967).[4] Since then, Scorsese and Keitel have worked together on several projects.[4] Keitel had the starring role in Scorsese's Mean Streets, which also proved to be Robert De Niro's breakthrough film. Keitel re-teamed with Scorsese for Alice Doesn't Live Here Anymore (1974), in which he had a villainous supporting role, and appeared with Robert De Niro again in Scorsese's Taxi Driver (1976), playing the role of Jodie Foster's pimp.[4]

In 1977 and 1978, Keitel starred in the directorial debuts of Paul Schrader (Blue Collar, co-starring Richard Pryor and Yaphet Kotto), Ridley Scott (The Duellists, co-starring Keith Carradine), and James Toback (Fingers, in which Keitel played a street hood with aspirations of being a pianist - a role writer/director Toback wrote for Robert De Niro to play).

Cast as Captain Willard in Francis Ford Coppola's Apocalypse Now (1979), Keitel was involved with the first week of principal photography in the Philippines. Coppola was not happy with Keitel's take on Willard, stating that the actor "found it difficult to play him a passive onlooker".[5] After viewing the first week's footage, Coppola replaced Keitel with a casting session favorite, Martin Sheen.

Keitel drifted into obscurity through most of the 1980s.[4] He continued to do work on both stage and screen, but usually in the stereotypical role of a thug. Keitel played a corrupt police officer in the 1983 thriller Copkiller (co-starring musician John Lydon), before taking supporting roles in the romantic drama Falling in Love (1984), starring Robert De Niro and Meryl Streep, and Brian De Palma's mobster comedy Wise Guys (1986), starring Danny DeVito and Joe Piscopo.

Keitel played Judas in Martin Scorsese's controversial The Last Temptation of Christ (1988) and co-starred with Jack Nicholson in the Chinatown sequel The Two Jakes (1990), directed by Jack Nicholson. Ridley Scott cast Keitel as the sympathetic policeman in Thelma & Louise in 1991; that same year, Keitel landed a role in Barry Levinson's Bugsy, for which he received an Academy Award nomination for Best Supporting Actor. The following year, Keitel played another mobster in the Whoopi Goldberg-starring comedy Sister Act.

Keitel starred in Quentin Tarantino's Reservoir Dogs (which he co-produced) in 1992,[4] where his performance as "Mr. White" took his career to a different level. Since then, Keitel has chosen his roles with care, seeking to change his image and show a broader acting range.[4] One of those roles was the title character in Bad Lieutenant, about a self-loathing, drug-addicted police lieutenant trying to redeem himself.[4] He co-starred in the movie The Piano in 1993,[4] and played an efficient cleanup expert, Winston "The Wolf" Wolfe in Quentin Tarantino's Pulp Fiction. Keitel starred as a police detective in Spike Lee's Clockers (an adaptation of Richard Price's novel, co-produced by Martin Scorsese). In 1996, Keitel had a major role in Quentin Tarantino and Robert Rodriguez's film From Dusk till Dawn, and in 1997, he starred in the crime drama Cop Land, which also starred Sylvester Stallone, Ray Liotta and Robert De Niro.

His later roles include the fatherly Satan in Little Nicky, a wise Navy man in U-571, diligent FBI Special agent Sadusky in National Treasure and the latter's sequel National Treasure: Book of Secrets. In 1999, Keitel was replaced by Sydney Pollack on the set of Stanley Kubrick's Eyes Wide Shut, due to shooting conflicts, and appeared in Tony Bui's award-winning directorial debut, Three Seasons (which Keitel also executive produced). Keitel also re-teamed with Jane Campion for Holy Smoke! (co-starring Kate Winslet).

In 2002, at the 24th Moscow International Film Festival, Keitel was honored with the Stanislavsky Award for his outstanding achievement in the career of acting and devotion to the principles of Stanislavsky's school.[6]

He also appeared in the Steinlager Pure commercials in New Zealand in 2007. Unlike many American male actors, Keitel has appeared nude in several films, including full frontal nudity in Bad Lieutenant and The Piano.

In January 2008, Keitel played Jerry Springer in the New York City premiere of Jerry Springer: The Opera at Carnegie Hall.[4] In 2008, Keitel was cast in the role of Detective Gene Hunt in ABC's short-lived US remake of the successful British time-travel police drama series Life on Mars.[7]

Keitel with wife Daphna Kastner in 2010

In 2013, he starred in the independent film A Farewell to Fools.[9]

Since 2014, he has reprised his role of Winston Wolfe from Pulp Fiction as part of a £40 million television advertising campaign for Direct Line, an insurance company in the United Kingdom.[10][11]